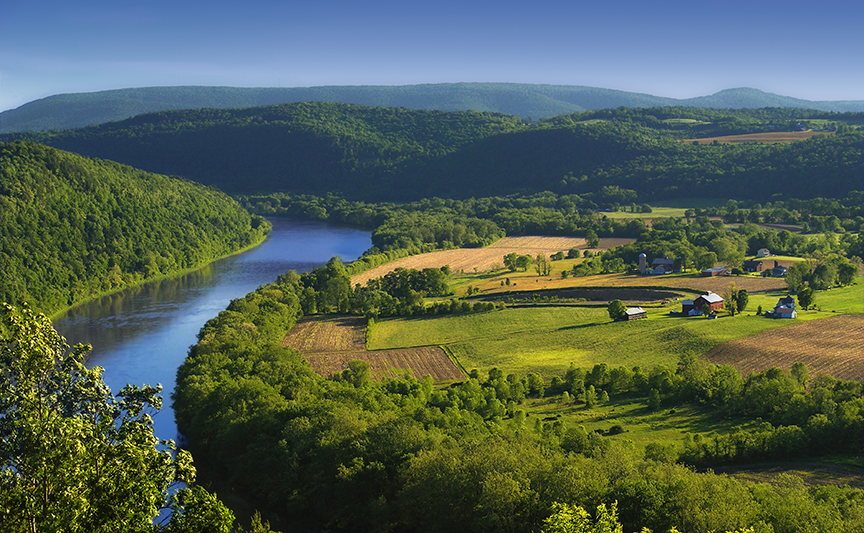 Photo: The Susquehanna River in 2009, as seen from the Marie Antoinette Lookout off of US Route 6 near Wyalusing (Bradford County) . Photographed by Nicholas A. Tonelli (own work), via wikimedia commons [cc2.0], accessed September, 2019.

The river rises near Cooperstown, New York, the Susquehanna flows for more than 440 miles through New York, Pennsylvania, and Maryland, emptying into the Chesapeake bay at Havre de Grace.

Some of the major cities along the path of the river and its tributaries.

At Harrisburg, the river is nearly a mile wide. The river is the 16th largest in the United States and is the largest, wholly contained within the U.S. and emptying into the Atlantic.

The Susquehanna provides about half the fresh water entering the Chesapeake Bay.

Various sources attribute the name Susquehanna as referring to the Susquehannock Indians. Some historians report that the name of the river comes from an Indian phrase meaning 'mile wide, foot deep,' referring to the river's unusual dimensions. In the Algonquian language, it simply means 'muddy water.'

Towns (north to south) that have the river as one of their boundaries.