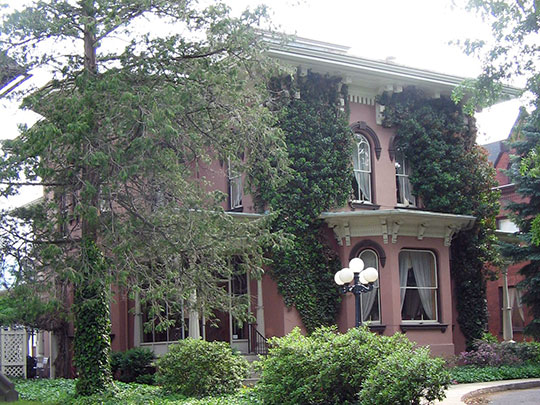 Williamsport is located on the north bank of the West Branch of the Susquehanna River, as it flows eastwardly, forty miles north-west of its confluence with the North Branch, at Northumberland, and under the shadow of the Bald Eagle range. This mountain extends in a due westerly course from the point where the river breaks through it at Muncy to Milesburg, a distance of over sixty miles. The valley of the West Branch ranges in width from one to three miles, is about forty miles long, and its soil, an alluvial deposit, is exceedingly rich and productive. The value of farm land ranges in price from fifty to three hundred and fifty dollars per acre. From Muncy to Lock Haven, a distance of thirty-eight miles, there are two cities, four boroughs and six villages, and the population of this valley will exceed fifty thousand. Williamsport is 25 miles east of Lock Haven, 248 east of Erie, 227 south-east of Buffalo, 253 south of Niagara Falls, 78 south of Elmira, 212 east of Pittsburgh, 94 north of Harrisburg, 220 north of Washington City, 197.9 north-west of Philadelphia and 235.6 from New York by the quickest routes. It is in latitude forty-one degrees fourteen minutes north and longitude seventy-seven degrees two minutes west from Greenwich, or one minute west of Washington. The difference of time, as ascertained chronometrically, between Girard Observatory, in Philadelphia, and the old Williamsport Academy, which stood on the north side of Third street, between West and Williams, is seven minutes and twenty-eight seconds. The variation of the magnetic needle on July 28, 1841, as ascertained by Alexander D. Bache, superintendent of the coast survey, was three degrees thirty-one and two-tenths minutes west. In 1862 as ascertained by C. A. Schott, of the coast survey, it was four degrees and twenty-five and seven-tenths minutes, being an annual increase of western declination of two degrees and six minutes. If the same annual increase has continued to the present-and it cannot have varied much-the variation at this date must be not far from five degrees at Williamsport. In July, 1841, Mr. Bache found by actual observation the dip of the needle at this city to be seventy-two degrees fifty-four and four-tenths minutes, and in August, 1862, Mr. Schott, also by actual observation, found it to be seventy-two degrees and fifty-one minutes, being a mean annual decrease of the dip from 1841 to 1862 of sixteen-one-hundredths of a minute. It is probable that the dip at this place is now within a small fraction of seventy-three degrees.

Michael Ross, a surveyor, was the original owner of a part of the territory now embraced within the limits of the city. He laid out the first town plot. It contained just one hundred acres, and was but a small portion of the present city limits. In 1803 he built the first brick house in Williamsport, which stood on the site of the present residence of J. V. Brown, corner of Third and Basin streets. The origin of the name of Williamsport has often been a source of perplexity. By some it is claimed that Michael Ross named it Williamsport after his son William. This view is strenuously maintained by the descendants of Mr. Ross. On the other hand it is asserted, with equally as much tenacity, that inasmuch as Judge William Hepburn, who was a State Senator from Northumberland in 1794, and introduced the bill to erect Lycoming County, which passed and was approved by Governor Mifflin April 13, 1795, should be accorded the honor. He was instrumental in locating the county seat, and the early settlers proposed to call it Hepburn's Port. To this he objected, and suggested William's Port, which was finally adopted. General Samuel Stewart, who was the first sheriff, is authority for this second version. Be that as it may, it is clear that it came from the word William, whether it was William Ross or William Hepburn, and that in course of time the name of the village came to be written Williamsport, and to-day it is a flourishing city of nearly thirty thousand inhabitants, and is recognized as the queen of the West Branch Valley. For some time after the selection of the county seat the business of the county is involved in uncertainty. The first court was held in a room rented of Eleanor Winters, and on the 11th of September, 1797, the commissioners issued an order in her favor for $30, to pay the rent for three courts. This was the first court for which there is any record. On the 1st of February, 1798, the commissioners issued an order to James Russell, the first inn-keeper, for £7 19s. 4ad., for the use of a room in his house for holding court at December term, 1797, and January term, 1798. May 4, 1799, Thomas Huston was paid $43.02 for the rent of his house for holding court. Contrasted with the court expenses of to-day a very great difference will be found.

After the incorporation of Williamsport as a borough, March 1, 1806, the population increased very slowly for many years. The United States census reports were not as full from 1810 to 1840 as they are now, but the assessment books of the borough from 1808 until the government began to classify boroughs and cities are still in a good state of preservation, and from them we are enabled to arrive at the population very closely by counting the number assessed and multiplying it by five.

It was not until after 1850 that the borough began to show signs of throwing off its swaddling clothes to make more rapid growth. After 1860 it gained one thousand a year for ten years; but between 1870 and 1880 its growth was not so rapid, the increase being only 2,904. This was caused by the financial panic of 1873. A great depression of business followed, resulting in a loss of population. The exodus for a year or two was heavy, and the outlook was not encouraging. A change, however, took place, and soon the tide set in the other way, and for several years past the city has been making rapid advances in business, manufactures, population and wealth, and to-day there is but little doubt that the population is 28,000, and if the large settlements just outside the corporate limits and on the south side of the river were taken into account, the population would not fall much, if any, below 30,000.