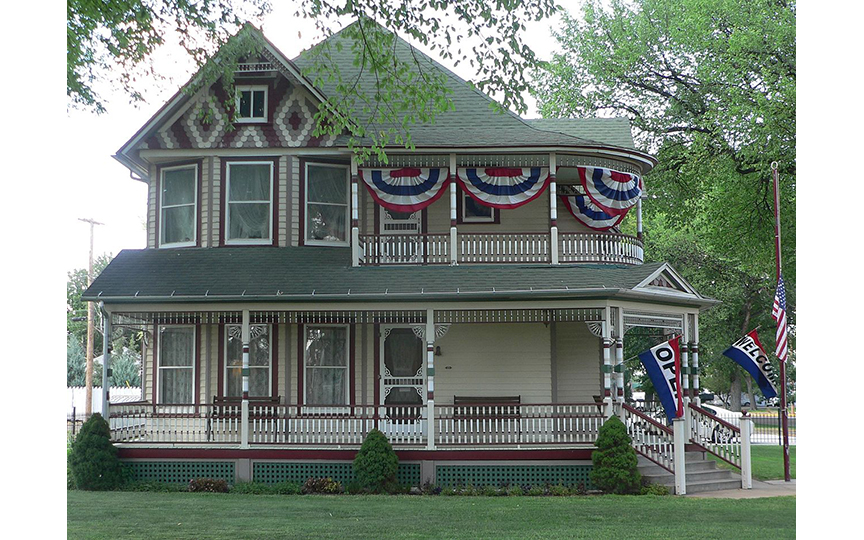 Kansas was admitted to the Union in 1861. The name derives from a native Sioux word meaning "people of the south wind."

On the continental map, Kansas is in the exact center of the United States, a parallelogram with one corner nibbled off by the Missouri River. The State on this map looks flat and uninteresting topographically, for within its boundaries are no lakes, no mountains, no really navigable rivers. It seems to be a rectangle of prairie grass with no more need for a guide book than is met by its highway junction signs. Yet this Kansas rectangle has its distinguishing features. These come not from rivers, mountains, or inland seas, but from the fact that this grass plot rises nearly 3,000 feet in 400 miles. In that slanting slab of prairie sod which begins descending eastward just beyond the foothills and rough country of the Rockies, lie at least two separate economic units. They amount to two different States. First, they have different soil. The eastern part of Kansas is a rich, deep, alluvial loam. The western part of Kansas is a sandy soil made by grinding down the glacial boulders of the Rocky Mountains in the waters of an ancient inland sea and by great rushing rivers that rolled along those latitudes. In the second place, not only is the soil different but the climate somewhat varies in each of these units. Eastern Kansas is a corn State. We have rainfall three years out of five, generally eight years out of ten, which will produce corn in most of the counties east of Hutchinson and Salina. The grass is lush and in central Kansas is highly charged with lime from those heavily rolling prairies that are called the Flint Hills, our bluestem pastures. In western Kansas the grass is short, but shot full of nourishment. Its short fuzz fools strangers into thinking the land is barren and useless. Yet that short fuzzy will nourish range cattle adequately and, when the soil is turned over, that sod is rich in those chemicals which make wheat. We like to say "Kansas grows the best wheat in the world." This is not exactly true, but it is true that Kansas grows splendid wheat, that it grades high, probably on the whole higher than the wheat of any other State which grows winter wheat. Further north they grow spring wheat, that is to say in the Dakotas and Manitoba. There they plant their wheat in the spring and harvest it in the autumn. In western Kansas they plant their wheat in the autumn and harvest it in the late spring and early summer. The rainfall is so distributed and the heat of summer is so devastating on these high plains that spring wheat will not prosper.

So there abide here two States: the grazing, farming corn land of eastern Kansas and the short grass pasture land and great wheat fields of western Kansas. Eastern Kansas is divided into small farms from 100 to 200 acres. Large-scale farming does not pay except in cattle growing where the bluestem pastures nourish flocks larger than Abraham ever drove out of the Land of Ur when he had "cattle on a thousand hills." But mostly in eastern Kansas the farmer is a barnyard stockman who grows his own corn, has his own pasture lot, cuts and bales his own alfalfa and hay, puts up his own fodder in the silo, and is economically sufficient to himself in the manufacture of the world's beefsteak, ham and eggs, fried chicken, and butter. In western Kansas, the tendency is to large farms. It is a one crop country, a statement which needs quick modification, for alfalfa and buffalo grass pasture and in certain northwest counties of the State an occasional corn crop makes it possible for the farmer to live on a 200-acre farm. But speaking rather broadly, western Kansas is a wheat bin. Farms are profitable when they pass 200 acres. Large agricultural units requiring a heavy endowment of machinery are fairly profitable in western Kansas. The people tend to live in towns and villages. They do their farming in August and September when the great motor plows furrow the fields, and again the farmers get busy in July when the combines reap and thresh the grain. The little farm with its garden, its diversified crop, its chickens, its calves, its pigs, is not found so often in western Kansas, indeed it is found rarely there. But in eastern Kansas the diversified crop is the normal type.

These geographical, indeed geological, differences between eastern and western Kansas make different economic interests and different kinds of people. The eastern Kansas farmer is a thrifty, cautious, diligent descend ant of the New England Puritan, physically and spiritually. The western Kansas farmer is a gambler, a go-getter. In western Kansas are many strains that did not come out of New England. The Mennonites live on the eastern fringe of western Kansas. They were Germans who lived a hundred years in Russia before coming to America and they have brought their own culture, their own civilization, which has persisted through all the 60 years of their Kansas exile!

So in our politics, eastern and western Kansas often find antagonistic interests, honest and deeply divisory differences. Western Kansas, in politics, is inclined to be clannish. Western Kansans form blocs in the legislature. They throw their votes in the ballot box to men who best represent their interests, which are somewhat different from the interests of eastern Kansas. Problems of taxes, of education, of transportation are not the same in the rolling prairie country, four or five tiers of counties in from the Missouri Line, as they are in that flat, lovely plains country, four or five tiers east of the Colorado Line.

So the parallelogram 400 by 200 in the center of our Nation is some thing different in reality from its appearance on the map. Every State is unique, but Kansas is visibly so, because of its geography and geology. In these latter days of the mid-third of the century, oil is coming into western Kansas to transform its civilization entirely. Oil will modify its politics. It will change the social outlook of its people. We shall have a kingdom of oil and wheat out of the high plains west of Newton and Abilene, the old cow towns of the cattle days, a State which will be rich in spots, polka-dotted with well-to-do farms and highly civilized country towns. Three times in the history of Kansas, western Kansas has completely changed. It had its energized vision in its pioneer days of the 1880s; its discouraging and desolate days just before the discovery of winter wheat in the 1890s; its days of high prosperity in the first two decades of the century, climaxing in the wheat bonanza days of the War. And now comes oil to change it again. In the meanwhile eastern Kansas goes on with a distinctly evolutionary line of progress from the days of the Civil War until today. Nothing has ever changed radically in eastern Kansas in economics or in agriculture. Within 70 years prosperity has come in waves, slowly but steadily.

Federal Writers' Project of the Works Progress Administration for the State of Kansas, Kansas: A Guide to the Sunflower State, Kansas State Department of Education, The Viking Press, New York, 1939.