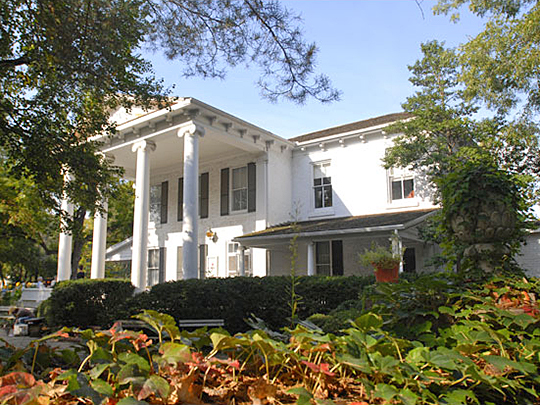 Derivation of the name Topeka [1]

According to Prof. John B. Dunbar, who is, undoubtedly, the best authority on Indian dialect in the Western country, this name is derived from three Indian words, viz: "To," potato, (the wild kind) "pe," good, and "okse," to dig. These words have exactly the same meaning among the following tribes of Indians: Otoes, Omahas, Iowas, and Kaws. A literal translation then would be, A good place to dig potatoes."

The wild potato was, in early times, very plenty along the banks of the Kaw river, and the Indians who lived to the north of here, came down, in seasons of scarcity, to this river to dig potatoes, and they exclaimed, "Topeka!" or, "This is a good place to dig potatoes."

Col. C. K. Holliday received the following explanation from White Plume, Chief of the Kaw tribe of Indians. Long before the name Kansas was given to the river by the government, the Indians used to call it Topeka, on account of the immense quantity of wild potatoes which grew along its banks, or, in the poetic language of these outlandish "Kaws," "the river upon whose banks grew the wild potato plant." Holloway, in his History of Kansas, says that "Topeka is of Indian origin, signifying potato, or, as the wags have it, 'small potatoes.' "These wild potatoes were very plenty in the bottom, east of the city, when the founders of the town arrived.

The 5th day of December, 1854, was the natal day of the flourishing town now known as the city of Topeka. On the morning of that day, in a little log cabin at the foot of Kansas avenue, were assembled nine strangers whom chance had brought together, and who were then and there to inaugurate a work destined to serve as a monument to their memory, more enduring may be, than pillar of marble or shaft of granite could have been.

As the sun moved up from the horizon, magnified to amazing breadth by the dry and rarefied atmosphere, the strangers strolled out upon the high land or divide, midway between the Kansas and Shunganunga, to get a general view of the landscape, and to judge whether it was a fitting site upon which to found a town. A glance was sufficient to convince them that the expansive scene presented elements of the picturesque seldom surpassed in numbers and strength in one combination; and, as they have many a time since remarked, Topeka was a beautiful place before there were houses here, whether it be since or not.

Returning to the cabin the question arose for decision, whether they would attempt the founding of a town, or a fort for civilians to congregate at, as the enterprise, in view of the political condition of the country at that time, might properly have been designated.

M. C. Dickey, getting near the center of the cabin, that his full altitude might find space, moved that "that fellow with the white hat," pointing to C. K. Holliday, seated with the rest of the party upon the ground, "take the chair." The proposition was received with approval, and "the fellow with the white hat" sought to bring himself into proper elevation for a presiding officer. There was a sack of flour available, which answered the purpose of speaker's chair, the first in Topeka.

F. W. Giles was named as secretary, and the following agreement was drawn up and adopted:

The town site shall be divided into fifty shares, and the lots apportioned among the shareholders by lot, from time to time, as the association may direct, reserving, however, one-sixth of the lots of the town to be donated to such persons as will improve them as directed by the association, and also one-sixth to be donated to the Emigrant Aid Company, of Massachusetts, as a consideration for the erection of a mill, a school house, receiving house, etc. Moreover we agree, that the timber and wood on our claims may be used by any member of the association for his own improvement for one year, provided that no person shall take more than four thousand feet of timber, board measure, and six cords of wood, except from his own claim.