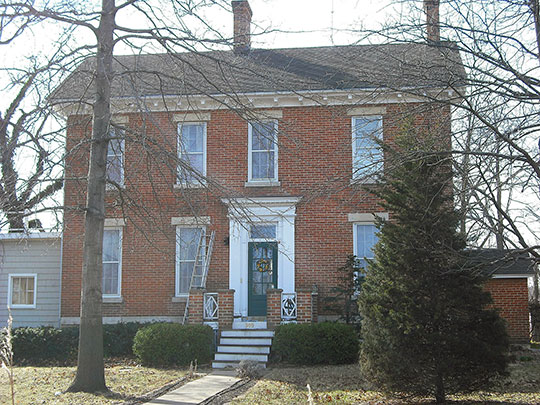 Douglas County, located in the second tier of counties west of Missouri and in the fourth tier south of Nebraska, is bounded on the north by Jefferson and Leavenworth counties, from which it is separated by the Kansas river; on the east by Johnson County; on the south by Franklin county, and on the west by Osage and Shawnee counties. It is one of the original 33 counties created by the first territorial legislature with the following boundaries: "Beginning at the main channel of the Kansas river, at the northwest corner of Johnson county; thence south to the southwest corner of Johnson county; thence west 24 miles to a point equidistant between the limits (embraced in the original plots) of the towns of Lecompton and Tecumseh."

It was named in honor of Stephen A. Douglas, United States senator from Douglas at the time of the passage of the Kansas-Nebraska bill. It has an area of 469 square miles and is divided into the following townships: Clinton, Eudora, Grant, Kanwaka, Lecompton, Marion, Palmyra, Wakarusa and Willow Springs. The general surface of the country is undulating, breaking into high bluffs along the Kansas and Wakarusa rivers. The bottom lands or valleys, which comprise about a quarter of the area, are from 2 to 4 miles in width. Timber belts are generally found along the streams, and average about a mile in width. The principal varieties of native timber are ash, elm, cottonwood, oak, walnut and hackberry. The main water course is the Kansas river, which flows in a general southeasterly direction and forms the northern boundary. The Wakarusa river, also an important stream, flows nearly across the county from the west and empties into the Kansas river.

The main tributaries of the Wakarusa are Deer, Rock, Washington and Coal creeks, while Plumb creek flow across the extreme northeast corner. In the south are Eight Mile and Ottawa creeks, and along the eastern boundary Captain's creek. Springs are abundant and good well water is usually found at a depth of 25 feet. The soil is extremely fertile, and all grains grow well. The principal crops are winter wheat, Kafir-corn and hay, but the county ranks high in the production of Irish potatoes. Limestone is extensively quarried in Wakarusa and Lecompton townships. Potter's clay is found along the Kansas river, and coal has been mined in limited quantities south of Lawrence. The county also ranks high in live stock and there are over 200,000 bearing fruit trees in the county, more than half of which are apple.

The first white men to visit the present Douglas county, so far as is known, were French traders, who passed up the Kansas river in the first quarter of the eighteenth century and carried on an extensive trade with the native Indian tribes. Following them, but nearly a century later, were the white explorers who generally followed the waterways toward the west. Thomas Say's route lay along the south bank of the Kansas river through what is now Douglas county, when he passed up the stream in 1819. Fremont followed this route in 1842 and again in 1843, when he went west to explore the Rocky mountains. In 1842, the expedition camped within the limits of Douglas county near the present site of Lawrence, and in his journal of the expedition, Fremont wrote, "We encamped in a remarkably beautiful situation on the Kansas bluffs, which commanded a fine view of the river." The Santa Fe Trail (q. v.), traversed the southern part of the country from east to west, and the route to the gold fields, which began at Westport, Missouri, crossed the Wakarusa near what was once the town of Franklin, a little southwest of the present town of Eudora, passed near Lawrence, and left the county beyond the present town of Big Springs. Thousands passed westward over these famous highways after gold was discovered in California, but there were none who stopped to settle as it was Indian territory and the only habitations were the stations kept by whites for the accommodation of the travelers.