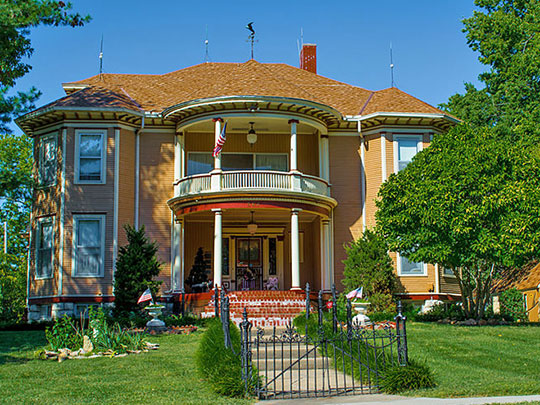 The early history of Johnson County is lined with the Choteau's early trappers and traders of the Mississippi Valley. Frederick Choteau was born in 1870 in St. Louis, MO. He could speak fluently in English, French, Shawnee, and Kaw, and occasionally acted as interpreter for the agents of the government in dealing with the Indians. His brothers, Ciprian and Francis, had a license from the government to trade with the Shawnees, Delawares and Kaws, and afterwards the Weas, Peorias and Peynkeshaws. Frederick Choteau, in 1828, located on the south side of the Kaw River and established what was then known as the French Trading Post. Up to that date there were no wagon roads here, and all articles were transported on pack horses by the way of trails cut through the brush. The Indians raised small patches of corn, which they dried in September, put in sacks made of hides, and buried them. After this work was done they went west for their annual hunt, sometimes not returning until the next spring.

The Choteaus bought all the hides and pelts the Indians brought them from these trips.

In 1830 Frederick Choteau established the Kaw River trading post, about 100 miles from the mouth of the Kansas River, and goods were taken up the Kaw River in keel boats. In 1840 he returned to what is now Johnson County, locating on Mill Creek, and made some fine improvements. Most of Choteau's properties were lost in a great flood in 1844. Three days after the flood, he completed a log house in the nearby highlands and moved his family into it.

One of the most important Methodist Shawnee missions west of the Mississippi was established within the borders of what became Johnson County. The Baptists and the Friends also had permanent missions here among the Shawnees.