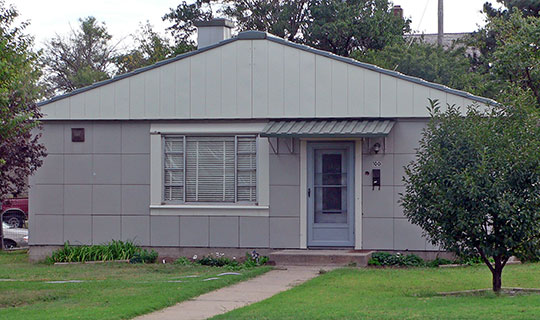 Ellis County was established in 1867 and named for Civil War hero Lieutenant George Ellis of the Twelfth Kansas Infantry. To protect early settlers and railroad workers in western Kansas, Fort Hays was established and the city of Hays soon developed adjacent to the Fort. Settlement was initially slow and developed first in the Walker area. However, in 1872 Englishman George Grant purchased over 500 acres from the railroad for a new English settlement, attracting some 300 Englishmen. Many of these early settlers left after a grasshopper infestation in the mid-1870s. These settlers were quickly replaced by a large number of Volga-German immigrants, so named because they had emigrated from Germany to the Volga region of Russia before coming to the United States. These later settlers established the communities of Antonino, Catherine, Munjor, Pfeifer, and Schoenchen. Their use of the local resources, particularly limestone, marks the character and architecture of Ellis County today. This is most notably evident in the historic St. Fidelis Church in Victoria. Known as "the Cathedral of the Plains," the church is recognized as Ellis County's rich history not only includes some of the Wild West's most notable characters but also early prehistoric fossils. In relatively recent history, the founding of Fort Hays State University in the early 1900s has continually attracted new residents to the county and provided an important educational and cultural resource to the communities of western Kansas.