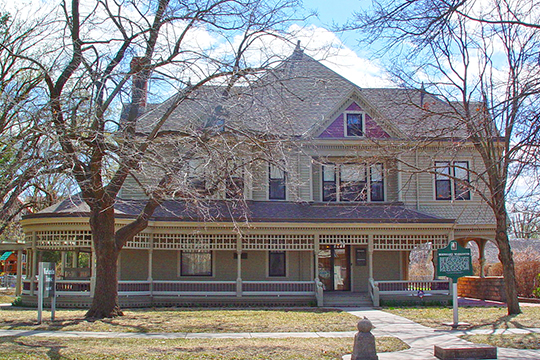 Newton, seat of Harvey County, is a trading center for the surrounding wheat country, and a main division point of the Santa Fe Railway. The city lies amid gently rolling hills. Main Street is bisected by tracks down which rattle endless freight trains carrying oil and grain to the east, merchandise and farm machinery to the west. About twenty-five passenger trains, including sleek streamliners, halt daily at the Main Street Depot.

Local economy is governed to a large extent by the activities of agriculture and the Santa Fe Ry,, particularly the latter. Almost a thousand inhabitants are employed in the shops, offices, and rail mill of the Santa Fe. Railroad news often crowds politics and information of world import onto the second page of the local papers. Labor Day is an important annual festival celebrated with parades, oratory, fireworks, and brass bands. Five per cent of the population is Mennonite. Some of them have renounced their traditional vocation of farming to enter business; there is a Mennonite Mutual Fire Insurance Company and Bethel College is Mennonite. Of the 23 churches in the community, the largest congregations are the Methodists and the Mennonites.

A house built by A. F. Horner in Brookville, Kansas, in the early 1870s was the first dwelling in Newton. Horner built it in order to win a town lot offered by the promoters of Brookville for the first house erected there. Within a few months Horner moved his 20-by-60-feet dwelling from Brookville to Florence, to Newton, to Hutchinson, winning in turn the lots offered by each town's promoters for the first dwelling. In July 1871 the Santa Fe Railway extended its line to the settlement which thereby succeeded Abilene as the terminus of the Chisholm Trail. The cattle trade turned Newton into a "cow town" overnight. Saloons, dance halls, and gambling houses for pleasure-starved cowboys sprouted from the plain. Although this phase of Newton's growth only lasted until January 1873, when the railroad was extended to Wichita, fifty persons are estimated to have met sudden death in its saloons and dance halls.

Bernard Warkentin, a descendant of the group of German Mennonites who migrated to Russia during the reign of Catherine the Great, was one of the first of his faith to reach Kansas. In 1872 he settled at Halstead, 12 miles west of Newton, and established a small flour mill operated by water from the Little Arkansas River. He later helped immigration agents of the Santa Fe Railway by encouraging his kinsmen to leave the Russian steppes for the Kansas prairies. Many of these devout, industrious people settled near Newton, introducing an Old World culture to the region and greatly furthering its agricultural development. With them they brought precious Turkey Red wheat. In 1885 Warkentin organized the Newton Milling and Elevator Company, which subsequently became one of the largest in central Kansas.

Newton was designated a division point of the Santa Fe Railway in 1873. The water supply proved to be inadequate, however, and in 1879 the division offices were removed to Nickerson. In 1886 the Santa Fe built the Hutchinson cut-off, which circumvented Nickerson and weakened its position as a division point. The townspeople of Newton, seeing a chance to regain the division point, began to negotiate with railroad officials. An agreement was reached in 1894 whereby the Santa Fe promised to reestablish a division point at Newton if an abundant supply of good water could be provided there.

Learning that Professor Erasmus Haworth of Lawrence had completed a geological survey of Kansas, which showed that the old bed of the Smoky Hill River extended through Harvey County, the citizens of Newton enlisted his aid. Professor Haworth unhesitatingly selected a point in the bed nearest the city, which when drilled, produced a vast supply of subterranean water. For this valuable service the Professor charged Newton $13.50.

Re-designated a division point and possessed of an inexhaustible water supply, Newton forged ahead steadily, and by 1910 the population numbered 7,862. Besides its railroad industries, Newton has a creamery, four, bakeries, one of which supplies a state-wide market, and four mills that annually produce 700,000 barrels of flour.