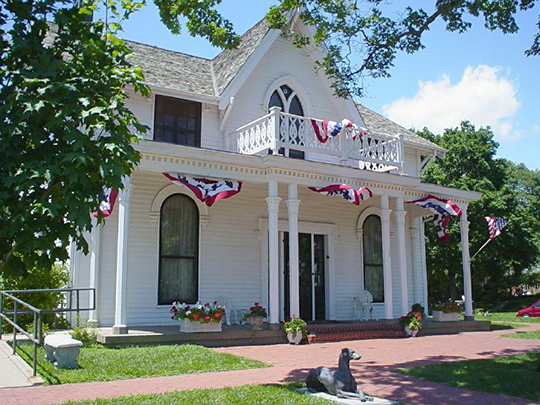 In May 1854, President Pierce signed the Kansas and Nebraska Act officially opening the land for white settlement. The United States government signed a treaty with the Kansa and Osage tribes that ceded their claims of tribal lands to what would become northeastern Kansas. George Million who reportedly had been in the area since 1841 ran a trading post outfitting settlers and trading with the Kansa and Osage. Million and Samuel Dickson, another early settler, made the first claims on the Atchison town site. The Atchison Town Company comprised of Dr. J.H. Stringfellow, Ira Norris, James Darnell, Leonidas Oldham, James Martin, David Rice Atchison, Elijah Green, E.H. Norton, Peter Abell, B.F. Stringfellow, Lewis Burnes, Calvin Burnes, and Stephen Johnson formed on July 11, 1854 and bought out Million and Dickson. The town company held its first sale of lots on September 21, 1854 and

Atchison was incorporated on August 30, 1855 by a special act of the territorial legislature. Atchison was laid out in a grid system at the banks of the Missouri River along the narrow valley of White Clay Creek. The commercial district developed along the north side of White Clay Creek and the industrial district along the south side of the Creek along the Missouri River banks. Residential districts developed adjacent to the commercial and industrial districts. Original Atchison, also known as Old Atchison, was soon followed by platting in the surrounding area: North Atchison in 1857 by Dr. Stringfellow, Samuel Dickson platted South Atchison in 1858, L.C. Challiss platted West Atchison in 1858 and Spring Garden in 1860 by G.T. Challiss.

Leavenworth had been the center of trade along the Missouri River until June 1855 when several Salt Lake and overland freighters selected Atchison as their outfitting point. Among the largest of these outfitters were Livingston, Kinkead & Co. and Hooper & Williams. It was this economic activity that launched Atchison's commercial development. George M. Million, Lewis Burnes, Daniel D. Burnes, James N. Burnes and Calvin F. Burnes established a ferry across the Missouri River at the foot of Atchison Street. The ferry operated until 1875 when the railroad bridge was completed across the Missouri River. In addition to partnership in the ferry, Burnes Brothers also operated store which carried an assortment of goods.

After the Civil War, Atchison began a long decline partly due to the downturn as a major westward expansion Missouri River shipping point and a fire in June 1867 that destroyed a significant number of buildings on Commercial Street between Fourth and Fifth Streets. Atchison turned it sights toward the immediate hinterland and began buying and selling goods to the settlements in northeastern Kansas.

James Nelson Burnes, treasurer of the Atchison Town Company, was a native of Marion County, Indiana, where he was born August 22, 1827. He moved to Platte County, Missouri in 1873; graduated from Harvard Law School in 1853; engaged in banking and the construction of railroads; principal owner and president of the St. Joseph Waterworks Company; and served as President of the Missouri Valley Railroad Company. He financed and built the Chicago & Northwestern railway from Eldon, Iowa, to Leavenworth and Atchison in 1870-71, and during the same years he started construction of railroad bridges across the Missouri river at both places. In 1873 he moved to St. Joseph. He was elected as a Democrat to Congress in 1882, and while serving his fourth term, while on the floor of the House, was stricken down by a stroke, his death occurring January 23, 1889. He is buried in the Mount Mora Cemetery, St. Joseph, Buchanan County, Missouri. James had two sons, Calvin C. and Daniel Dee. Calvin C. died in Chicago on November 23, 1893 and Daniel died November 2, 1899. Lewis Burnes was also active with the Squatter's Claim Association, which was actively trying to establish Kansas as a slave state. On June 10, 1854, the squatters held a meeting in the Salt Creek Valley, west of the city of Leavenworth. At that meeting a Squatter's Claim Association was formed and declarations and resolutions were adopted. Lewis was the president of this association. Lewis operated the Burnes Brothers storehouse. No obituary was found for Lewis Burnes.