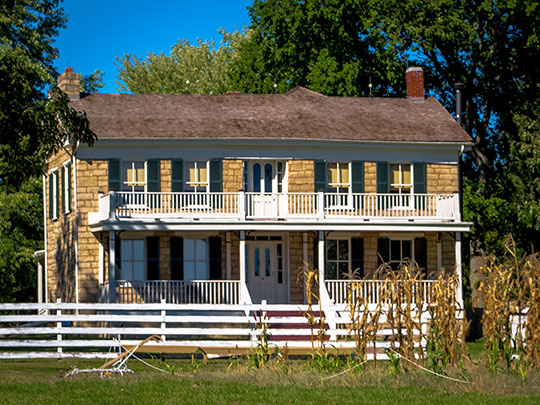 Olathe, the seat of Johnson County, is a prosperous market town of pleasing residences and stately elms. It was founded in 1857 on a green prairie knoll carpeted with blue and scarlet verbena, the white lacy blooms of wild parsnip, pink-petaled wild roses, and scores of other flowers. When Dr. John T. Barton, one of the founders, decided to call the town by an Indian name meaning beautiful, he had difficulty in explaining to the Indians what he wanted. As he pointed to the flowering meadow a Shawnee exclaimed, "O-la-the!" and it was so named. (The Shawnee word for beautiful is wes-see.)

William Clarke Quantrill, notorious guerrilla leader, raided Olathe in 1862. Riding in at midnight, he captured revelers in the town's three saloons and rousted sleepy citizens from their beds. A clergyman who did not answer when called was killed. Men were lined up in the town square, and a score of Union Army volunteers were taken prisoner. After loading plunder on wagons and wrecking the newspaper office, the Quantrill band marched the prisoners toward Missouri. They were finally released after taking an oath that they would never bear arms against the Confederacy.

Olathe was the home of John P. St. John (1833-1916). It was during ex-Governor St. John's first administration (1879-1881) that Kansas adopted a prohibition amendment, largely through his efforts. He was the Presidential candidate of the National Prohibition Party in 1884 but was defeated by Grover Cleveland. Republicans blamed him for the defeat of their candidate, James G. Blaine, by splitting the Republican vote, and St. John became the center of a storm of abuse. So bitter was the feeling against him that he was frequently hanged in effigy. In later years St. John said, "No man living in America today has been the object of more bitter attack and burning hatred than myself."

In the town square is the Johnson County Courthouse, a brick and granite structure with bracketed cornice, two-story gable porch, hip roof, and towering cupola. So popular is the courthouse with couples eloping from Missouri and eastern Kansas that the town has become a local Gretna Green. Judge Bert Rogers, father of Charles (Buddy) Rogers, orchestra leader and motion picture actor, presides (1938) in its "Cupid's Parlor," which is decorated with more sentiment than restraint. Love birds adorn the fringed lamp in the parlor and many photographs of Buddy embellish the walls.