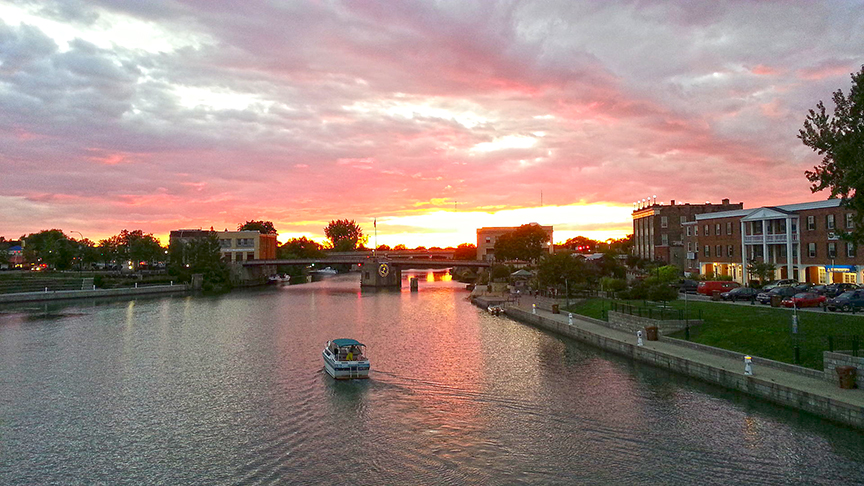 Photo: Gateway Harbor along the Erie Canal in North Tonawanda, NY, about 1500 feet from the present day western terminus of the Erie Canal where it connects to the Niagara River. Photographed by Joshua Karn, 2012, (own work) [cc-by-3.0], via Wikimedia Commons, accessed October, 2019.

The first great canal to be completed in America was the Erie Canal [†] from Albany to Buffalo, 363 miles, — often called Clinton's Big Ditch, as Governor De Witt Clinton was its chief projector. In October, 1825, after eight years' toil of thousands of men with pick and spade and wheelbarrow, the great work was finished, and Governor Clinton led a tandem fleet from Buffalo to Albany amid the acclamations of the multitudes that gathered along the banks. The motley fleet bore a bear, two eagles, two Indian boys, and other things typical of the land before the coming of the white man,[1] and its coming was announced by a continuous line of cannon placed along the route. From Albany, Clinton proceeded down the Hudson, and, pouring two kegs of Lake Erie's water into the sea, pronounced the communication between "our Mediterranean seas and the Atlantic Ocean accomplished."

Towns Along the Erie Canal

The Erie Canal proved a wonderful boon to New York. The cost of transporting merchandise from Albany to Buffalo had been over $100 a ton; now it fell to one tenth of the former price, and this opened a vast market to the merchants and manufacturers of New York City, which soon became the chief metropolis in America. Farmers hastened from all sides to purchase farms along the canal, and the price of land rose rapidly. But not only was New York benefited by the canal. The farmers of Ohio, Indiana, and Illinois could now purchase their axes, plows, and other utensils for a fraction of what they had formerly paid for them, and indeed the business of the entire country was affected by this great improvement.[2]

One of its effects was to cause a rage for canals to spread over the country. Philadelphia saw its western trade threatened with ruin. This led the people of Pennsylvania to decide on digging a canal between their two chief cities, and the work was soon begun.[3] The great Ohio Canal joining Lake Erie with the Ohio River, from Cleveland to Portsmouth, was begun in 1825. The Chesapeake and Ohio Canal extended from Pittsburgh to Washington. Many other canals of smaller pretensions were built, and many were begun and never finished, for another and far superior mode of inland transportation was now attracting the attention of the people.