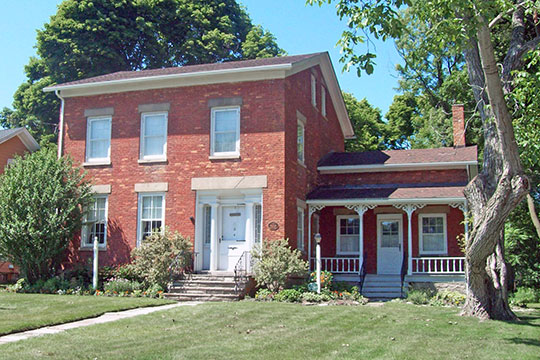 Lockport, a city of 22,000 people, is located in the center of Niagara County in western New York State. The city developed around the flight of locks carrying the Erie Canal up the face of the Niagara Escarpment. Water powered industrial development, generated by the drop of the canal, fostered a climate of growth and prosperity through the end of the nineteenth century. The ease of transporting goods on the canal benefited other local industries, including the city's quarries. The abundant local stone extracted from the escarpment was sold locally and shipped to major cities in the Northeast and Midwest. The combination of a prosperous economy, an abundant source of high-quality building stone, and a large population of skilled stonecutters and masons has provided the city with a unique legacy of stone architecture.

Lockport was incorporated as a village in 1829. The census of 1830 recorded 2100 inhabitants in the village, 400 fewer people than recorded in 1825. The decline in population was temporary, as the establishment of many new industries during the 1830s resulted in substantial population growth.

Lyman Spalding was one of the city's most successful early entrepreneurs. Spalding operated a flour mill which produced 120,000 barrels of flour annually and an iron foundry manufacturing plows. By 1835, Lockport had established a significant industrial economic base. "Uppertown" above the locks contained a carding mill, two saw mills, a machine shop, a sash factory, a tannery, a hat factory, two harness shops, four cabinet shops, two newspapers, a book bindery, and at least fifty retail shops. "Lowertown," at the base of the locks, boasted three flour mills, a cotton factory, a woolen mill, two distilleries, foundry, a tannery, a hat factory, a harness shop, shoe stores and five other retail establishments. Spalding established the first fire company during the 1820s. A hook and ladder company was organized in 1833. Several additional independent fire companies were organized over the next few decades.

During the 1830s, the "Lower" and "Upper" areas of the village competed to lure new development. Events of the 1830's appeared to give the lower settlement the edge. In the late 1820s, the Albany Company laid out lots and streets in Lowertown and advertised that area would soon surpass Uppertown as the center of the village's business and industry. The extension of the canal raceway further boosted Lowertown's economic prospects. A cotton factory constructed in 1833 soon became one of the village's largest employers providing over 200 jobs. In 1829, Niagara County's first bank opened at the corner of Chapel and Market Streets and the large frame Lockport House, the village's premier hotel for many years, was constructed at the corner of Exchange and Market Streets. During the 1830s, the village's most prominent and successful citizens constructed substantial brick and stone homes in Lower Town. Lower Town was further boosted by the arrival of the Lockport and Niagara Falls "strap" railroad. The railroad transported westward-bound passengers directly from canal packet boats. Horses pulled railroad cars on the line until 1840 when they were replaced by steam locomotives. The Dewitt Clinton, the first locomotive to operate on the line was shipped to Lockport on a canal boat.[1]

The gradual decline of Lowertown began in 1837 with the scandalous closure of the Lockport Bank. Although the bank reorganized and reopened under a new name, during the period the bank was closed, a competing bank opened in Uppertown. Several years later, the Lockport House burned and was soon replaced by newer lodging facilities in Uppertown. Another blow to Lowertown was the effect of the canal reconstruction project undertaken between 1840 and 1860. During the 1840s approximately twenty buildings in the area were demolished to accommodate the widening of the canal. A much greater impact was the interruption of water power necessitated by the reconstruction of the flight of locks in the 1850s. By mid century, Uppertown had become the village's dominant retail and institutional center and even Lowertown's role as the village's industrial center appeared to be at risk.

The Panic of 1837 and the following national recession temporarily stalled Lockport's growth. New York State let bids to widen the canal prism and enlarge its locks in 1840. Poor economic conditions halted construction on the canal in 1842 and forced many businessmen, including Lyman Spalding, into bankruptcy.

Later in the 1840's, the resurgence of growth coincided with the area's second major wave of foreign immigrants. The enlargement of the canal and locks attracted many Irish workers with experience on canal projects in Lower Canada.[2] Most of the Irish settled and remained in the area. To serve the new Catholic community the Roman Catholic parish of St. Johns was founded in 1838. As the population of the village increased, the village's two original school districts were divided. By 1848, the village contained seven school districts. At that time, the City adopted a "union" secondary school system establishing a central facility for students in the upper grade levels.