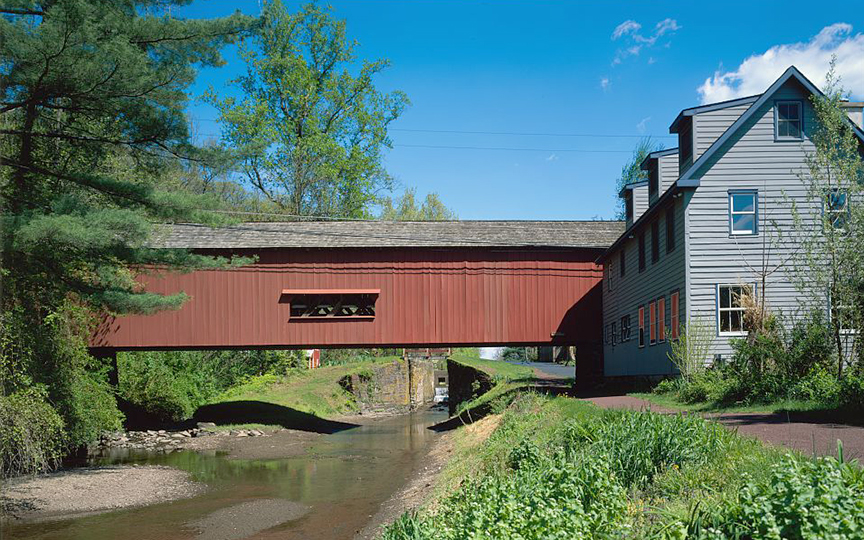 The Delaware Canal [†] is famous for its wide variety of tourist attractions, including both historic resources and recreation. Its beautiful scenery is a part of this fame, the product of 300 years of peaceful settlement and agriculture and the modest change brought about by the Delaware Canal over the 100 years it operated. Its natural resources remain remarkable for their quality and variety in spite of extensive human impact.

The Canal runs for 60 miles, paralleling the Delaware River from Easton to Bristol, threading its way through two distinct landscapes: one formed of the narrow valleys, wooded hillsides and cliffs, and old canal and market towns to be found in upper and middle bucks County along the Delaware River; the other highly urbanized and developed, beginning near Morrisville, and described in the following section on the Canal's End Reach.

When it was built in 1832 as the Delaware Division of the Pennsylvania Canal, the Canal connected the Lehigh Navigation at its terminus in Easton with a route for transporting anthracite to the upper tidal portion of the Delaware River and deep-water transportation. The construction of this canal remedied the problem of using river boats to carry goods to Philadelphia, since rapids and frequent low flows made the river an unpredictable and hazardous means of transport.

Though the two canals joined as part of a grand transportation system that stretched from the Appalachians to the tidewater, they had markedly different effects on their surrounding landscapes. Unlike the Lehigh Navigation, which generated a great deal of industrial development and community building along its course, the Delaware Canal was more simply a conduit for goods and commerce, an economic and physical linkage. Although it was the "Main Street" for the series of remarkably intact small canal towns that sprang up to serve the canalboat traffic—today, key elements of the cultural landscape—the canal precipitated little industrial development, and even less impact on the rural area through which it flowed, much of which had been settled with farms more than a hundred years earlier. Small industrial centers grew here and there—as evidenced by the series of ruins to be found along Ingham Creek in New Hope—but they flourished because of the swifter water power of tributaries rushing off the plateau above the Delaware River, not the canal itself. Farmers likewise had well-developed alternate outlets for their dairy products, grains, fruits and vegetables, and though they often used the canal, they did not depend upon its link to Philadelphia as farmers farther north did.

Thus, much of peaceful Bucks County was bypassed by the 19th-century urban-industrial boom experienced in the counties to its north. Its sturdy economy was instead sustained by its excellent agricultural soils and nearby markets, until the late 20th century when the land finally became more valuable as country estates, and expensive subdivisions.

The Delaware Canal ceased operation in 1932. Ten years later, the Commonwealth acquired it as a linear park and continued to maintain it. Today, Delaware Canal State Park features the most intact of all towpath canals in the United States, capable of being watered throughout this Reach. The canal is both a National Historic Landmark and a National Recreation Trail, and is visited by more than one million visitors annually. As a further indication of the area's attractiveness, the Delaware River has been considered by the National Park Service for addition to the National Wild and Scenic Rivers System, and it is a proposed state scenic river. Routes 32 and 611, which parallel the river and canal and are known as River Road, are state-designated as Delaware River Scenic Drive.

The eastern boundary of this Reach is the edge provided by the river. It is bounded on the west largely by Route 413, the historic route of the Walking Purchase, and infamous swindle of the Lenni Lenape, who had agreed to sell as much land as a man could walk in a day. English settlers collected on the bargain by sending a team of runners from Wrightstown to a point just south of today's Hickory Run State Park in Carbon County.

Numerous 18th- and 19th-century villages and crossroads occupy the Reach, the largest being the small towns of Yardley and New Hope. Yardley was a mill village and canal town and grew as the hub of the surrounding area, and is today a quiet bedroom community for commuters.

New Hope began at a ford on the river and grew into a small industrial center as a result of the canal, perhaps the canal's greatest influence in this landscape aside from the canal towns. By the mid-20th-century New Hope had become a popular resort that began its tourist era as a stop for new plays bound for Broadway and as home to many New York artists, musicians and writers. So many artists have worked in and around New Hope that they are known as the New Hope School. With its playhouse still in operation and numerous art galleries, boutiques and bed-and-breakfasts, New Hope draws one million sightseers and shoppers annually. More than 30,000 ride the canal-boat operated by a concessionaire licensed by the state park, and another 30,000 enjoy the recently refurbished New Hope & Ivyland Railroad running southwest out through the scenic Buckingham Valley. Four miles to the west of New Hope, in Lahaska, is Peddler's Village, a shopper's haven, also drawing more than a million visitors annually.

Six miles south of New Hope on River Road is Washington Crossing State Historic Park, where George Washington made his famous Christmas Day, 1776 crossing of the river to attack the British camped in Trenton, New Jersey—a turning point in the American Revolution. Today, the park is a popular picnic site, and an annual re-enactment of the crossing is held, drawing as many as 100,000 spectators. The small 19th-century village of Taylorsville is clustered around one of the many attractive early metal bridges stretching across the river. Many of the buildings are owned by the Pennsylvania Historical and Museum Commission. PHMC also owns extensive grounds stretching between the river and the canal, plus additional acreage three miles north, called Bowman's Hill. This property includes both a steep hill and wildflower preserve overlooking the Delaware and the early 18th-century Thompson-Neely farmstead.

Rich agricultural landscapes characterize this Reach beyond the Passage, notably the Pennsylvania German farms of the Stouts Valley and Durham Valley in the far north. Isolated until recently from the modern development pressure experienced in middle and lower Bucks County, these valleys are largely unchanged since they were settled in the 18th century. Many more parts of the Reach are also lovely agricultural areas, but are experiencing growth pressures to varying degrees depending on location. Towns further north along the river and canal are also less affected by development, but all offer great visual interest along the entire length of the Passage.

Both the State and Counties have numerous parks in both Passage and Reach, including Pennsylvania's Delaware Canal and Ralph Stover, Bucks county's Tinicum, Hal Clark and Prahl's Island, and Northampton County's Fry Run. Recreational use of parks, the towpath and the river throughout this Reach is quite high, including bicycling that also takes in the New Jersey side of the river, which is similar in character to this Reach and also has a preserved canal, the Delaware and Raritan. Canoeing and floating in inner tubes on the river, and canoeing on the canal where sufficient depth exists, are popular recreational pastimes, along with fishing—including a growing spring shad run.