The Delaware and Hudson Canal 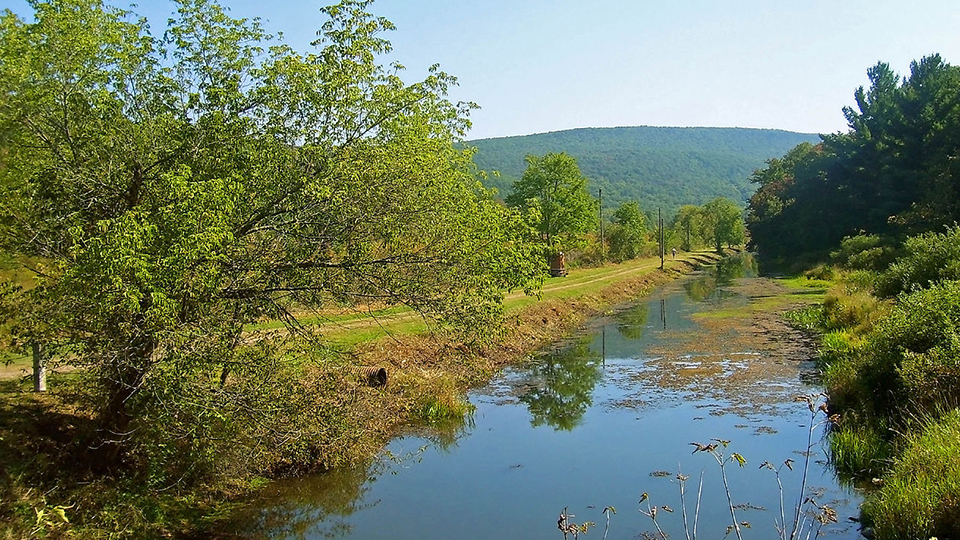 A remaining section of the Delaware and Hudson Canal off US 209 near Summitville, NY, Photo by wikipedia username: Daniel Case, 2007, own work [cc-3.0], via wikimedia commons, accessed July, 2022.

Built between the Hudson River at Roundout and Honesdale, near the coal fields of Pennsylvania, the Delaware and Hudson Canal provided an economical means of transporting coal from the Moosic Mountains to Pennsylvania and other industrial ports. The canal itself played an important role in growth and development of the communities along its path, and specifically resulted in the engineering milestone, with the construction and design of a series of aqueducts, designed by John Roebling. However, its impact on the Upper Delaware Valley was not as great as the railroad which would follow it.

Beginning at Honesdale to the west, the canal entered the valley at Lackawaxen, crossing the river to Minisink Ford, then following the river downstream to Port Jervis, where it again left the valley on its route east to the Hudson. Several small communities located near the mouths of tributaries benefitted from the traffic generated by the Canal, including Lackawaxen in Pennsylvania and Barryville, Pond Eddy, and Mongaup on the New York side. In addition to the coal corning via the Canal from Pennsylvania, bluestone was profitably shipped out of local quarries in the Valley. The bluestone industry's greatest period of activity, however, occurred after the introduction of the rail­road to the region. Railroads gradually gained a competitive edge as freight carriers, and although the canal remain profitable until its closing in 1898, its relative decline had begun decades earlier.

The Canal remains within the Upper Delaware Valley include intact sections of the canal bed, locks, embankments, earth cuts, feeder channels, waste weirs, basin sites, aqueducts, and bridge abutments. Many of these features were destroyed or buried during construction of portions of New York State Route 97 in the 1930s. Other historic properties directly related to the Canal include lock tender houses, company offices and shops, and taverns, inns, and stores directly fronting upon the towpath. Surviving canal structures and adjacent, functionally related buildings have been separately documented in a comprehensive survey of Delaware and Hudson Canal sites in Sullivan and Orange counties of New York.

Roebling's Delaware Aqueduct, now owned and maintained by the National Park Service, is considered the oldest wire suspension bridge in the United States. It was among those portions of the Delaware and Hudson Canal designated as a National Historic Landmark in 1968. Following the closing of the Canal in 1898 it was converted to use as a highway bridge, and continues in use as a vehicular bridge.

Other mid-nineteenth century structures in villages served by the canal—including houses, schools and churches&msashoften reflect the positive influence of the canal in the development of their communities. Those built during the first three decades of the Canal's operation tend to have been built in the Greek Revival style with mortised timber framing and clapboard exteriors, although several altered houses, and one relatively intact school near the path of the canal, were built of uncoursed stone rubble. Typical of the former group is the circa 1850 McCallum House in Barryville, featuring a two-story, three-bay side entrance facade, a recessed one-story wing and characteristically wide Greek Revival entablatures with returns. Several canal-era houses in the valley feature two-story, five‑bay center entrance facades, including the heavily altered circa 1840 lock house at Lock 65, Knights Eddy, with its broad Greek Revival entablature returns and a doorway with tramsom and sidelights. More intact and formal in style, the Canal Company's Office in Lackawaxen (now "Roebling's Delaware Inn") features a formal central entrance with transom and side lights, wide frieze band, and square columned front porch, as well as a fully plastered attic which may have served as a dormitory for workers when extensive repair work was done on the Canal each spring.

The circa 1885 Nieke Canal House at Minisink Ford is similar in its basic form, but incorporates a relatively steeply pitched roof and a projecting piazza over looking the Canal. Together, these picturesque elements give the building a distinctive, later nineteenth century appearance. Al though stone construction is evident in the circa 1820 Stone Hotel in Pond Eddy and in the circa 1850-1860 first stories of the altered William Wolff House and the William Bennett House, both in Barryville, the only canal-era stone building which retains its original form and detail is the Barryville Schoolhouse, built in 1867. Unlike the two examples previously cited, the walls of the schoolhouse are faced in mastic, scored to resemble coarsed ashlar blocks.