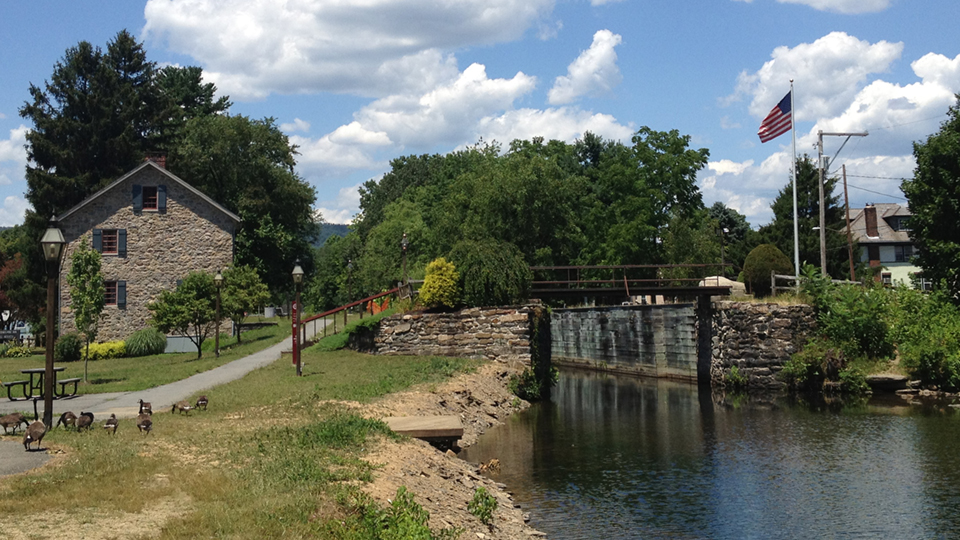 The discovery of anthracite coal (stone coal) near the town of Mauch Chunk (Jim Thorpe) in 1791 marked the beginning of the industrial development of the Lehigh River Valley and the rapid growth of towns in the area. In 1793, the Lehigh Coal Mine Company was formed. This company purchased a large tract of land on Summit Hill where the first discovery of anthracite coal was made.

The nearest potential market of any size at that time was Philadelphia. The company was faced with two problems: to find an efficient and cheap way to deliver the coal to market and to educate the public to its uses. For the next 25 years the shipment of coal was, slow and hazardous. For a while coal was shipped on wooden boats called arks but these could only be used when the river was high and many arks never made it to market.

Following the War of 1812, bituminous coal in the eastern markets became scarce and expensive. This plus an increased use of anthracite by blacksmiths caused the demand for anthracite to spiral. Much coal was shipped by arks to Philadelphia at this time. One of the biggest anthracite users this time was the firm of White and Hazard, nail manufacturers. So when the original trustees of the Lehigh Coal Mining Company gave up their business in 1817, Josiah White decided to visit the Lehigh Mines. Josiah White in his work with the nail factory had also become interested in the use of water power. Because of his interest, he built the first dam and lock on the Schuylkill River. As a result of his visit to the mines, the firm of White and Hazard and Hauto leased the Lehigh Coal Mine Company's land. In order to transport the coal to market they petitioned the state legislature for permission to improve the Lehigh River. So in April of 1818, White and Hazard began to survey the Lehigh River. In. 1818 they also started the Lehigh Navigation Company and work in improving the river began the same year at the mouth of the Nesquehoning Creek. They had planned to narrow the channel so to raise the water for boat travel, however, they discovered that there still wasn't enough water. In order to solve this problem, Josiah invented a new type of lock system which became known as a Bear Trap Dam. These unusual dams were designed to create artificial freshets so when the dam gates were opened, the boats would float down stream on an artificial flood.

During the first year of river improvements, about 40 buildings were built at the mouth of the Nesquehoning, to house workers. From this grew the town of Mauch Chunk (Jim Thorpe).

By 1820, most of the money originally invested in the two companies was spent. So on April 20, 1820, the two companies merged to form the Lehigh Navigation and Coal Company. The Canal at this time only consisted of 2 bear traps of the Upper Lehigh River and open river travel to the Delaware River on flat bottomed arks. But even though coal transportation was still dangerous the demand for anthracite grew so that by 1824 more than 9,500 tons of coal were shipped to Philadelphia.

In order to improve transportation further, construction was started on the lower sections of the Lehigh Canal in 1827. The work was put under the supervision of Canbass White, an engineer and relative of Josiah White, who had previously helped build the Erie Canal in New York State. In two years the Lehigh Canal was completed and regular canal coal shipments began.

In January of 1841 there was a terrible flood on the Lehigh River and many locks and dams were completely destroyed. But in time most of the canal was repaired and coal shipments continued. Over 500,000 tons were shipped in 1846.

In June of 1862, a second flood ripped through the dams and locks on the Lehigh Canal. When the Mauch Chunk dam broke over 150 people were killed. Damage was so bad that most of the canal between White Haven and Mauch Chunk was destroyed. In 1855 the Lehigh Valley Railroad began operation. Following the Civil War the use of the railroad for hauling heavy loads began replacing the canal. This plus the disastrous floods convinced the company not to rebuild the upper canal. The canal continued operation but as the years went by shipments by canal decreased. From the post-war World War I peak of 5,000,000 tone in 1923, shipment dropped to 3,000,000 tons by 1929. Following 1927, the Lehigh Navigation and Coal Company made no more profits and shipping on the canal stopped in 1931.

In its 102 years of operation, the Lehigh Canal helped to form and develop the industry and settlements along the Lehigh River. Starting with the early canal builders, people began settling along the canal and soon small towns and villages began with the canal came increased mobility for people and goods. The canal was not only used for transporting coal, produce, lumber but livestock traveled to market via the canal also.

Industry soon developed along the canal, too. Canal boat building, industries which manufactured canal-support products, coal using industries and industries that need the water power created by the canal were soon started.

The Lehigh Canal was officially opened in 1829, June 29th and closed in 1931 with the exception of some activity in Carbon County with canal boats hauling coal to the New Jersey Zinc Company up to 1942 when a devastating flood nailed the Lehigh Canal's coffin closed for industrial use forever.

The Walnutport to Allentown section of the canal perhaps shows the canal in its rural and small town character. In this section it passes through many small communities which originally developed and grow with the development of the canal. Parts of this section also pass through rural and often inaccessible areas. The features in this section are generally in deteriorated condition, however, much original fabric, which could be restored, remains. This section contains all the remaining original dams used to water the canal as well as the remains of original aqueducts.