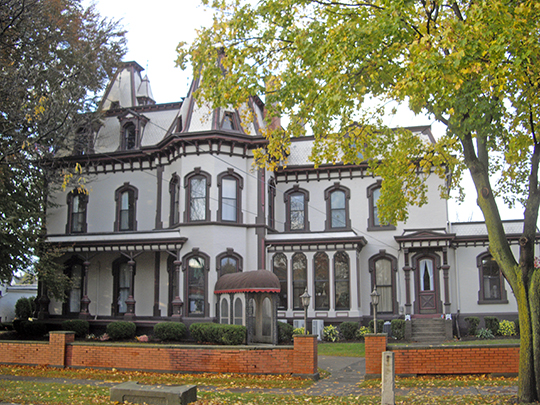 Fairport was first settled in 1810 and grew with the success of the Erie Canal. It was not until 1822, three years before the completion of the Erie Canal, that Fairport really got started. With the Canal open from Rochester to Little Falls, land was cleared and several farms sprang up in and around the area. In 1827, the Fairport Hotel was built and in 1829 the Post Office was moved from Fullamtown to Fairport. The Canal became an important transportation route and Fairport, with a hotel and a post office, became a popular stop for travelers. In fact, Fairport got its name from canal travelers who labeled the stop as a "pretty fair port." The name stuck.

With the coming of the railroad in 1853 and the success of the Canal, Fairport's population began to grow. People that once lived in surrounding areas, such as Egypt, moved and settled near the Canal. Fairport experienced steady growth and by the time it was incorporated in 1867 had a population of more than 1,000. As a canal port, Fairport was a destination for many local and regional farmers. Agricultural products, primarily potatoes, were shipped from the port, and businesses sprang up to serve workers with production and shipping companies. One prominent early industry was the DeLand Chemical Company, which produced chemicals such as potash from hardwood ashes during the mid-1800's. During the late 1800's, the Sanitary Can Co., originally the A.H. Cobb Preserving Company, built a canning factory west of North Main Street, north of the railroad tracks. This company became the American Can Company in 1909 and remained Fairport's largest business until it closed in 1993.