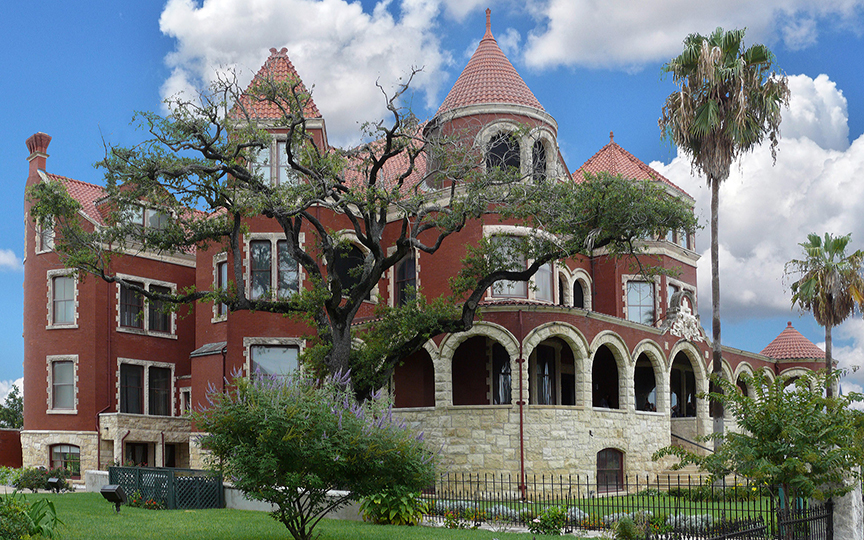 In 1836 Texas [1] asserted independence from Mexico and declared itself as the independent Republic of Texas. In 1835 it became part of the U.S. as its 28th state. The largest cities include: Houston, San Antonio, Dallas, Austin, Forth Worth, El Paso, Arlington, Corpus Christi, Plano and Garland.

Text, below, was transcribed by a publication of the "Southern Immigration Company," an enterprise apparently funded to a great extent by the railroads to induce "immigrants" to inhabit the frontier territories. The title page reads "Being a Description of the State of Texas and the Inducements She Offers to Those Seeking Homes in a New Country."

The State of Texas offers inducements to immigrants which cannot be surpassed in many respects, and are rarely equaled by any other country on this continent. These comprise excellence of climate, soil and water, agricultural, grazing and commercial advantages, and educational facilities ; and in addition to all these cheap lands. The settler who comes into this State now, has not necessarily to undergo the hardships of pioneer life, as was formerly the case. He can, if his inclinations point that way, still find large areas of uncultivated pasture lands in the extreme west and northwest, where his flocks and herds may roam at will, but at least one-third of the territory of the State is about as well populated as many of the States east of the Mississippi River. Mills, gins, stores, schools and churches are met with almost everywhere, and opportunities for social intercourse are at the command of even those in the most sparsely settled neighborhoods. But a glance at the accompanying map will show what an enormous extent of fertile and productive land is still open to settlement. Within a few years past, the country west of longitude 98°, was the home alone of the Indian and an occasional hardy frontiersman, who stubbornly disputed his sway. Now the area of population has pushed westward to the 100th degree of longitude, and even beyond that. But there yet remains the "Panhandle" section, having an area of about 31,000 square miles, which is much more than an average-sized State of the Union, almost entirely unoccupied, and which has been shown by recent surveys, to be in general a very rich and fertile section, well adapted to agricultural purposes. South of the "Panhandle" and west of the 100th degree of longitude, stretches a vast extent of country, suitable for sheep, horses and cattle, and, along the streams, for agricultural purposes. The mineral wealth of a great part of this sparsely settled country, from the limited examinations so far made, is believed to be very great, and to promise, in the near future, a fine field for the pioneer prospector.

The facilities for travel, and the transportation of produce and supplies over the greater part of the State, are now ample. There are at present in operation over 3,000 miles of railway, five hundred and sixty-five miles of which were completed during the year ending September 1st, 1880. And the extension of these roads in every direction, is being rapidly and energetically pushed. No country on the continent seems to present the same attractions for railroad capital that Texas does, judging from the number of new enterprises of this sort that are being inaugurated, and the rapid extension of the lines already in process of construction.

All along these lines of road, towns are springing up, and population increasing sufficient for the establishment of schools and societies ; and stores, where goods are sold at no greater advance of prices than the cost of additional freight, are found at the railway stations, and here also the farmer finds a ready market for his produce.

The farmer is invited to a country of unsurpassed fertility and health, where upon the same land he can produce the great staples, cotton, wheat, oats, rye, corn, tobacco and sugar; the grazier, to the broad prairies or rolling uplands, where cattle, sheep and horses, feed the year round on the native grasses; the artisan and mechanic, to thriving, growing towns, where his skilled labor is in demand at remunerative prices; the capitalist, to the inauguration of the many industrial and manufacturing enterprises demanded by a vigorous and growing population. In short, the immigrant who seeks "natural advantages," can scarcely go amiss for them, and must be hard indeed to please, if in our great diversity of soil, climate and production he can find no spot to suit him for the establishment of a home than the cost of additional freight, are found at the railway stations, and here also the farmer finds a ready market for his produce. The design of this chapter, however, is merely to introduce the subject, leaving the several attractions of the State to be especially treated under appropriate headings, but it is not out of place to add here that the utmost care has been observed throughout, in the preparation of these pages, to avoid exaggeration. It must be borne in mind that this pamphlet is not the production of an individual or company interested in the sale of lands, but a publication made solely for the purpose of attracting immigration by a truthful and unbiased statement of facts. But while its object is to set forth the inducements which Texas offers to immigrants, and invite the latter to settle within her borders, those having charge of its publication, fully appreciate that, if mutual benefits are to flow from immigration, new settlers must not be attracted by representations which their future experience will not verify. Should they be deceived they may become dissatisfied, and results may follow alike injurious to themselves and to the State. For this reason it has been deemed of utmost moment that no assertion shall find a place in these pages unless it is entirely true.

And just here one word to our own people. The people of Texas cannot be too careful as to the manner in which they receive new comers. A civil word, a little politeness, or an act of kindness, costing nothing, may be the means of favorably impressing a stranger, who, in turn, may be the cause of turning hundreds of immigrants in this direction. On the other hand, a short, uncivil answer and gruff manners will, in a measure, confirm the unfavorable reports given him by the enemies of Texas, and he returns or goes, disgusted, to other portions of the country and uses his influence against us. It would require an almost superhuman effort of philosophy for persons coming to a strange land where things are found so entirely different from their accustomed surroundings, not to feel a natural " homesickness," and when to this is added a cold and surly reception, it is not strange that sometimes disgust supervenes ; and he who might have been a good citizen and a good neighbor becomes a bitter enemy. We who are "native and to the manner born " know that there is as much hospitality and kindly feeling among the people of Texas as can possibly exist anywhere, and these suggestions are not made with the idea that immigrants coming into the State are likely to receive " a cold shoulder," but our people should see to it that such persons have extended to them not only the common courtesy due to strangers, but that hearty welcome and active sympathy and assistance that no man appreciates so much as he who finds himself" a stranger in a strange land."