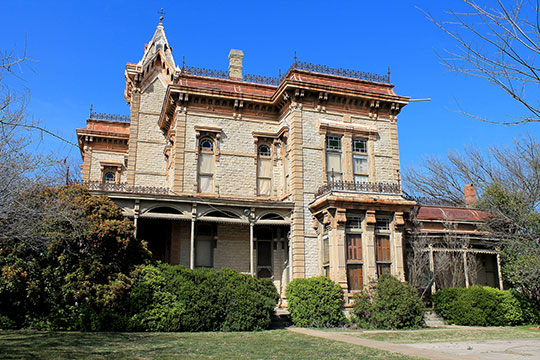 Colonel Absolom Bishop first arrived in what would soon become Wise County in 1854. Bishop helped organize the campaign to carve Wise County out of the undifferentiated territory known as Peter's Colony. In 1856 the county creation bill, which delineated the boundaries of Wise County, passed through the State legislature in Austin. With the incorporation of the county, the need arose to create a county seat, which, at the time, was required to be within 5 miles of the county's center. In preparation for this, Bishop had inked a deal with James Proctor in 1854. Proctor's property, some 160 acres, covered the hilltop upon which the city now stands. Bishop convinced Proctor to deed 60 acres to the newly formed city, the return for which would be a dramatic increase in land values enjoyed by Proctor as the city was built.

Bishop set to the platting of the original city with determination. An early historian of Decatur declared that, "To his natural endowments of taste and an orderly mind, Colonel Bishop brought to the task before him the garnered observations of broad travel and the experience of metropolitan life, which intangibles he worked into the grand plan of the county capital of Wise County." Rejecting the erratic construction and the haphazard building plans that often accompanied the creation of new urban centers on the frontier, Bishop was keen to ensure that the new city developed in accord with his specific vision of a systematically developed urban area that remained centered on the square.

To this end, and armed with hefty pile of 'burr-oak stakes' Bishop set about surveying and laying out the town initially known as Taylorsville, after president Zachary Taylor, whose fierce prosecution of the Mexican/American war of the mid 1840s had greatly impressed the novice city planner. Bishop's affection for the president quickly palled in the wake of Taylor's pronouncement that he would happily use the same kind of force to bring dissident states into line with the federal government, and led to Bishop's successful petition to have the city's name changed to Decatur in honor of the naval hero, Commodore Stephen Decatur. Although overtly inspired by the square-centered and compact street design of nearby McKinney, Bishop's city design further revealed the influence of colonial practice and 18th century neo-classical aesthetics.

In his mind's eye, Bishop conjured the image of a compact hillside community whose orderly grid of streets would form a coherent system that radiated outward from the central public square. This specific form of urban organization not only revealed the impact of the simple, rational yet balanced attributes of classical aesthetics which had shaped many of the cities in the eastern colonies, but also the rectilinear grid that dominated the Spanish colonial cities to the south. True to his reputation, Bishop sought, and largely succeeded, to create a virtue out of the limited availability of level building sites in the city by ensuring the city square was on the very tip of the hill, one of the flattest pieces of land in the city at that time.

Not surprisingly, this aspect of the city's design reflected Bishop's dominant principles and the continuing common sense view that civic life is guided, shaped and responsive to the mutually reinforcing bulwarks of commerce and law. Bishop's design effectively solidified the elevation of this principle, as the majority of the budding city's residents would have to ascend the hill in order to participate in the public life of the city. Indeed, one historian attributes a "vision of a gleaming palace of justice towering above the prairies" to Bishop. By centralizing both legal and commercial activities in the city, Bishop was forcefully asserting the primacy of these two aspects of community life in the face of the absence of both in the surrounding area as well as the city's uncertain future.

By the turn of the century, the center of Decatur was in place. The city's third and final courthouse was completed in 1896 and the majority of the limestone and brick buildings that ring the square outnumbered the cheaper wood framed structures. The Romanesque Revival style county courthouse was commissioned after the third wooden one burned in the opening weeks of 1895. It was completed in 1896. As was the case in many North American cities, the last decade of the 19th and the first decade of the 20th centuries were marked by a rapid modernization with the introduction of new services such as electricity and sanitary sewers and potable water. While the introduction of services and the growing importance of the motor car allowed for greater territorial spread of housing (particularly noticeable at the time along the 'major thoroughfare' of College) the commercial and social life of the city was still focused on the square and courthouse. After the successful conclusion of the Indian Wars, Decatur enjoyed an extended period of prosperity into the 1920's. These years were marked by population growth, territorial expansion, the creation of new services, the addition of a railroad depot and, in the latter half of this idyllic period, the development of an oil and gas industry. The decade that marked the city's greatest expansion was the 1880's. In 1880 there were 579 residents in the city and by 1890 the city's population had ballooned to 1,746.

The rapid expansion of the population was fostered by the arrival, in 1882, of the Fort Worth and Denver Railroad. Although the rail line effectively stunted the city's potential for eastward expansion, the depot linked local producers to distant markets and served as a catalyst for the coming decades' rapid developments. It's hard to underestimate the economic and social impact of the railroad on small frontier cities. By slashing the cost of transporting products and people, the railway entwined the city in a far-reaching web of business, social and cultural relations. In order to further minimize transport costs, businesses clustered around the rail terminal in the city. The industrial development around the railroad diverted economic focus to the eastern half of the city and helped consolidate the commercial and legal activities in the center. As industry continued to develop, housing began filling in the city's vacant lots. With two newspapers, a theater, a post office, a number of dry goods retail outlets and different official buildings all located within spitting distance of the square, the center of town was the cultural and social hub of the city, precisely as Bishop had hoped it would be.

The Crash of 1929 and subsequent great depression stifled development in the city and the population contracted as residents sought out opportunities elsewhere. As the regional economy stagnated, the population declined leaving Decatur to quietly and quickly shift to just another small city. Through these difficult times, the city maintained its integrity and unique status as the county seat which, in turn helped realize a series of improvements. The construction of US 380 (originally known as Highway 24) and Highway 81 in the 1930s, followed by the relocation of Highway 81 to the current location of 287/81 in 1968 and the construction of the US 380 Bypass completed in 1987 provided means by which Decatur could experience a new surge of growth with the new millennium.