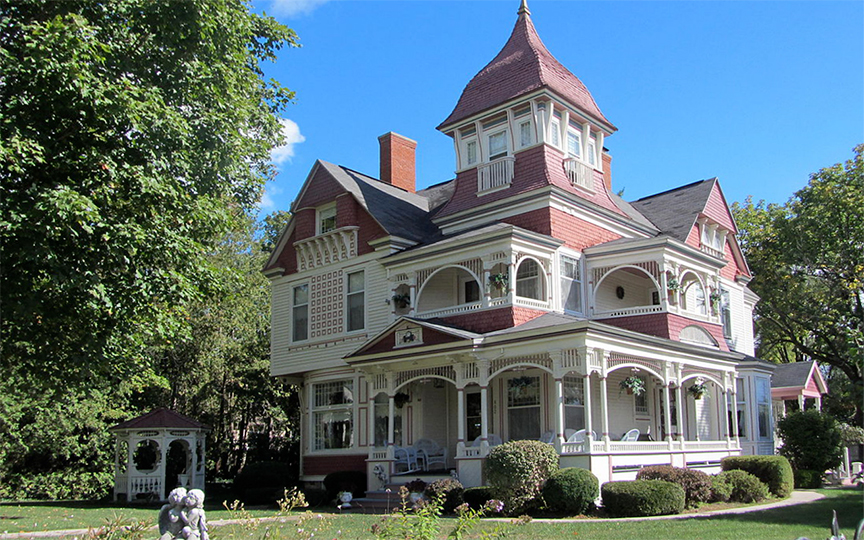 Michigan [†] derives its name from two Indian words in the Chippewa language, Mitchaw, great, and Sagiegan, lake — the land of the great lakes. The Territory of Michigan was a part of New France, whose boundaries were as illusive as its history was romantic and mysterious. One historian tells us Michigan embraced that part of the Mississippi Valley north of Ohio, Indiana and Illinois; bounded on the east by Canada, and on the west by the great plains west of the Father of Waters. The Huron tribe of Indians occupied the Lower Peninsula of Michigan, and were more civilized and less nomadic than the other western Indians. They early formed friendships with the energetic and adventurous fur traders, who had penetrated the wilderness for gain and advancement in civil and military positions. When the French traders returned to Montreal they gave such glowing descriptions of the country, rich in furs and sunny and fertile lands, they inspired the slumbering spirit of the colonists. As early as 1536, when Jacques Cartier reached Montreal on his second voyage, he was told by the Indians of "the three great lakes; a sea of fresh water [probably Lake Superior], of which no man had found an end; of great stores of gold and copper; that there was a river running southwest, which required a month's sailing to reach a beautiful land where there was no snow or ice, where oranges, almonds, nuts of various kinds and apples grew in abundance. The people in that region dressed as the French [no doubt the Spaniards] and lived in walled towns, and were at war with the inhabitants continually."

The Indians were prudent husbandmen and cultivated large fields of corn, laid out in symmetrical order, the remains of which can be traced in some localities to this day. The squaws prepared the corn with mortars and pestles. They made many kinds of pottage with corn, peas and beans. Fish were preserved in large vessels. Like more civilized people they depended upon hunting, fishing and farming. The villages were sometimes large and laid out regularly, often surrounded with timber and well protected.

Detroit was visited as early as 1610, and Champlain's maps of 1612 show the connection of the straits between the lakes. On the strait the wandering traders established stations, and a village of Hurons existed near, or on, the present site of the city, and was named by the Indians Ka-ron-ta-en, meaning The Coast of the Strait. Thus it seems Detroit can claim to have been located before Boston, New York, Philadelphia, or New Orleans. The most reliable records of the early days of this State are derived from the Jesuit missionaries, of whom Brebeuf and Daniel were the pioneers. They joined a party of Hurons at Quebec in the year 1634, and sailed through the Ottawa River to Lake Huron, upon whose shores they erected the first log house, which served for home and sanctuary for many long and weary days. They daily rang the church bell and called the savages to prayers. Here they educated a small band of Hurons, and trained them for missionary assistants.

Raymbault began a mission at St. Mary's Falls in 1641, but his strength soon succumbed to the rigorous climate and his arduous duties, and in the last stages of consumption he returned to Quebec to lay down his life, worn out for his Master. Thus it was with many of the early missionaries. Their zeal was greater than their strength, and their enthusiasm burned with a fervid and unquenchable flame. While carrying the cross through the trackless "wilds, they braved all obstacles; they suffered at the hand of the savage every indignity; they were scarred with hot irons, covered with burning bark, and often tortured to death. What wonder Tallemand and other martyrs cried out in dying agony, "We are a spectacle unto the world, and to angels and to men." The ranks of these devoted men were filled as they fell in this century's highways by no less ardent followers of the cross, thus testifying to the world the wonderful missionary zeal of that age. Although they formed no permanent mission for over a quarter of a century, who can estimate the influence they exerted from the Gulf of Mexico to the St. Lawrence? They taught the Indians to cultivate the soil upon a more generous plan; introduced new seeds and plants, as well as fruits; and led them to provide against the adverse seasons and failures in the chase, thus avoiding the famines which had, it is supposed, decimated their numbers from the Atlantic to the Pacific shores to an alarming extent. These pioneer missionaries rendered the only accurate and scientific account of the regions they penetrated, and contributed the earliest geographical knowledge of the great Northwest to the world.

The French explorers engaged these consecrated men upon all important expeditions, and it is believed their gentle policy mitigated materially the experience of those who fell into the hands of men whose ambition for France, as well as their own selfish motives, caused them to overlook the rights of a weaker and less intelligent race.

The shores of the northern lakes and adjacent lands were explored in 1654 by two young fur traders, accompanied by a band of Ottawas and Algonquins. They penetrated the wilds for a distance of fifteen hundred miles, and after two years returned to Montreal with such encouraging reports of the richness and beauty of the country, that they were granted permission to fit out an expedition to extend French commerce into the North west. Gabrielle Dreuillettes and Leonard Gareau, former missionaries among the Hurons, were selected for the enterprise, but they met with discouragement at the outset, owing to the enmity existing among most of the Indian tribes at that time. They were attacked just below Montreal by a band of Mohawks and completely demoralized. During the following five years various companies from Montreal interested in the fur trade pushed their way into the new regions, and eventually formed an alliance with a number of western tribes who desired a league with the French whereby they might resist the Iroquois. The Indians were represented by two explorers, who returned to Quebec in 1660 accompanied by sixty canoes, laden with rare peltries and paddled by three hundred Algonquins; whereupon the Government determined to explore the territory around Green Bay and Lake Superior, and establish at some convenient point a post for the general rendezvous of the tribes. This task was appointed Rene Menard, a Jesuit missionary, who entered upon his work with a determination to penetrate the Northwest farther than any of his predecessors. He left Quebec on the 28th of August, 1660, with but few supplies or comforts of life, but with the trusting faith of a child, saying, "I trust in Providence, which feeds the little birds of the air and clothes the wild flowers of the desert." Menard reached the bay now known as L'Anse, where he remained eight long months, with no companions but the rude, untutored savages. The Hurons invited him to visit them on the Island of St. Michael, where they had taken refuge. He left his converts in the spring, and with one Indian pursued his journey to the Bay of Che-goi-me-gon. After passing through Portage Lake, his companion moved the canoe and its contents across the portage, and the aged missionary, who was now quite feeble, strayed into the woods and was never seen again. Years afterwards his breviary and cassock were discovered among the Sioux. Father Allouez, undaunted by the fate of the aged Menard, and full of the spirit of his order, embarked at Three Rivers in company with about four hundred Indians, who were returning home from Quebec, where they had been for the purpose of trade. The missionary with his Indian hordes reached Sault Ste. Marie in safety; from there he proceeded to Lake Superior, which he named in honor of M. de Tracy, and the first map of Lake Superior, supposed to be the work of Marquette and Allouez, bears the name of Lac Tracy ou Superieur. The Indians regarded this lake as a divinity, on account of its size and in consequence of its furnishing them with fish when hunting failed.