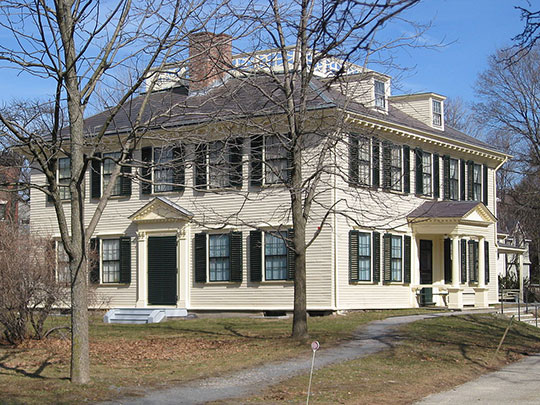 Boston's first settler was William Blackstone, a recluse of scholarly and probably misanthropic mental cast, formerly a clergyman of the Church of England. He had built himself a hut on the western slope of what is now Beacon Hill, planting his orchard on what later became Boston Common. At that time the wilderness occupied the peninsula, which was 1/3 or less the size of the current Boston peninsula. Almost an island, it jutted out into the bay, joined to the mainland by a long narrow neck like the handle of a ladle. It was a mile wide at its widest, three miles long, and the neck was so narrow and so low that at times it was submerged by the ocean. Blackstone's realm was bounded on the west by a mud flat (the Back Bay); on the north by a deep cove (later dammed off to make a mill pond); on the east by a small river which cut off the North End and made an island of it, and by a deep cove (later known as 'Town Cove'); and on the south by another deep cove. Here the disillusioned clergyman read his books, farmed a little, traded a bit with the Indians, and breathed air uncontaminated by any other white man.

His idyllic solitude was rudely shattered after four or five years, however, by the arrival of John Winthrop with a company of some 800 who settled in what is now Charlestown, just across from his paradise. Their miseries were many. The water at Charlestown was brackish; and their settlement could not easily be defended against Indian raids. Blackstone visited them and was melted by the spectacle of their plight. He invited them to come across the peninsula and the company eagerly accepted his hospitality.

The first year acquainted the Englishmen and their families with the rigors of the New England climate, and as it was too late to plant crops, more than 200 died of starvation and exposure. The following spring a ship laden with provisions, long overdue, dropped anchor in the bay, and famine was averted. The freshly tilled soil later yielded a good crop and the Colony survived and grew.

Fisheries were established. Fir and lumber created an export market. The foundation of trade and agriculture were early laid. Within 4 years more the 4,000 Englishmen had emigrated to Boston and its vicinity. 20 villages ramified out of the peninsula town to form a definite Puritan Commonwealth.