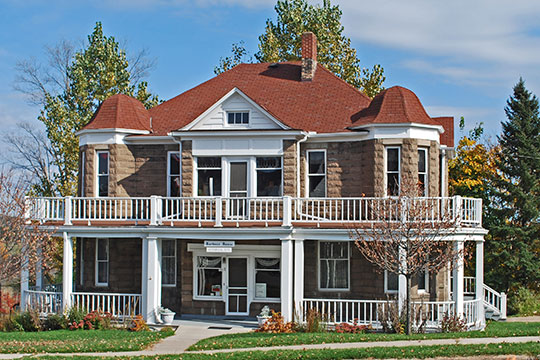 In the spring of 1881, Hollister and Runkel were convinced they had discovered a new iron range. Runkel convinced the Chicago Northwestern Railroad to build a line to Crystal Falls, and the railroad was completed in June, 1882. The location for the City of Crystal Falls had been selected due to its location between two mining exploration areas, as well as the availability of land to build the town on. By the time the railroad was completed, there were six active mines in the area, and over 42,000 tons of ore was shipped the first year.

Over 30 mines eventually operated in the area. During the Panic of 1893, all but one of the mines, the Paint River Mine, shut down, but opened again when economic conditions improved. By the early 1900s, the town was booming. The community had been incorporated as a village in 1889, and as a city in 1899. Growth continued until the 1940s, when most of the mines had shut down. A few mines re-opened after World War II, but closed again when they could no longer compete with the large open pit mines and pelletized ore. Once the mines had closed, the railroad into Crystal Falls was abandoned.

No active rail lines currently enter the City, although the Canadian National (Wisconsin Central) line from Sagola to Amasa runs nearby.