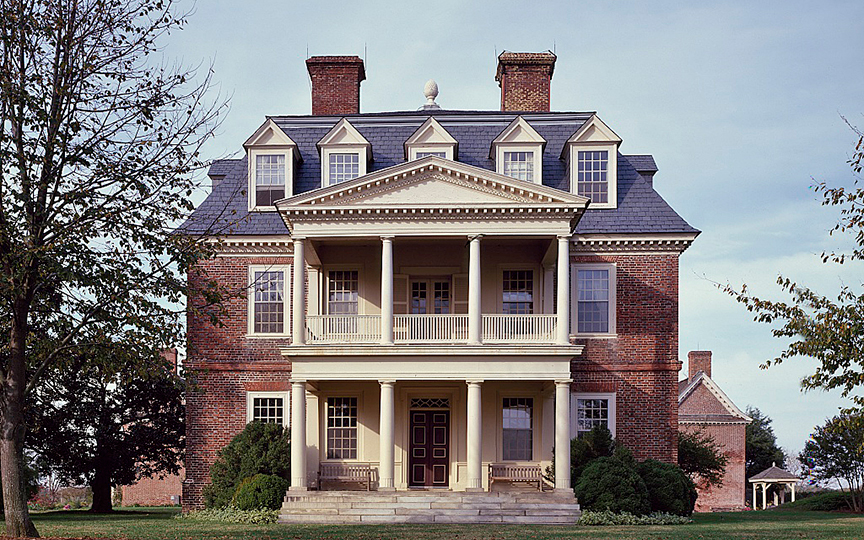 The Virginia colonial and state legislatures passed approximately three hundred and fifteen acts establishing towns between 1760 and the mid-19th century. The colonial government had tried, often unsuccessfully, since the late 17th century to create towns throughout Virginia to encourage and control trade. The legislation of 1680, 1691, 1706, and 1778 had an effect on the forms and types of Virginia towns founded in the late 18th and early 19th centuries. The towns were governed by trustees appointed initially by the county courts or named in the act of establishment; their replacements were elected by the freeholders of the town. Each town was surveyed and recorded. Many were founded on the land of a promoter who stood to benefit greatly from lot sales and an increase in land values. Lot purchasers were required to build a dwelling house of specified proportions by a prescribed date, and most towns were divided into one-half acre lots as specified in the early legislation.
[Continue Reading]

Virginia is organized with 39 cities which are independent of the 95 counties. According to en.wikipedia.org there are only 3 other independent cities in the entire U.S.

Virginia's landmarks are unparalleled resources, illuminating the culture and history of America from 16,000 years ago to the present. The Commonwealth encourages preserving and protecting Virginia's historic, architectural, and archaeological sites. Much of the state's appeal and significant income are derived from these resources. Our landmarks serve both as a major tool for urban renewal and as a key element of the state's multi-billion dollar tourism industry.

The Commonwealth's resources illuminate thousands of years of Native American culture, mark the birth of a new nation, and Mission School, Amherst, represent the homes of the nation's founders, battlegrounds of both the American Revolution and Civil War, and public and private architecture that embodies the dynamic forces of immigration, frontier, economic, and industrial revolution, and growth. These historic places – the houses, stores, train stations, warehouses, iron furnaces, canals, landscapes, and bridges – are woven into the fabric of our daily lives. They are a part of what shapes the unique character and spirit of each community. Together, they define this place we call Virginia, and us as Virginians.

There are currently 1,962 individual entries including districts that encompass more than 95,053 contributing properties listed as Virginia Historic Landmarks and on the National Register of Historic Places. This represents a 20% increase over the 1,633 resources registered in 1993. Virginia remains 10th in the nation in registered resources – with only a very narrow margin from the 9th ranking state. The growth in the total number of registered properties since 1992 equals a 131% increase in annual demand.

Contributing most to the increase are the department's cost share and state tax credit programs. Cost share survey and planning projects will result in the nomination of historic districts in nine localities in the 1999-2000 cycle and 16 historic districts in 11 localities during the 2000-2002 cycle. Registration has also increased as developers and communities use the Virginia Rehabilitation Tax Credit Program as a means of urban renewal and community revitalization. Since 1997, when the program began, 105 projects have received tax credits for rehabilitating buildings that are either individually listed or eligible for listing on the registers or that are contributing properties within registered historic districts. As a result of the tax credit program, the number of historic districts in particular has increased by about 20%.

The number and types of resources in various localities depend on several factors. Past settlement practices, proximity to historic transportation routes, and natural phenomena all play a role in creating the wealth of resources in different communities around Virginia. Every county and city in the Commonwealth has historic resources that have been identified and recorded in the department's paper and electronic files, making the information more accessible to the public. The number of documented architectural resources in the state ranges from fewer than 80 in Greene and Appomattox Counties to more than 2,000 in Albemarle County and 5,000 in Arlington County, and from fewer than 20 in some towns, to more than 2,000 in large cities like Norfolk and Richmond. Recorded archaeological sites – prehistoric, historic, and underwater – range from fewer than 30 in Dickenson and Nottoway Counties to more than 2,000 in Fairfax County. The variation from locality to locality is most often a result of difference in the level of survey completed to record resources rather than the presence or absence of historic buildings or sites. Because few localities have been systematically surveyed to identify and assess the majority of historic resources, oftentimes localities and the state do not know what they have.

Registered resources include significant historic sites, buildings, structures, objects, and districts. Historic sites – archaeological, historic, and landscape represent the location of a significant event, activity, or occupation. Individual historic buildings are created to shelter human activity, while historic structures are made for other purposes such as bridges, tunnels, and earthworks. Historic objects are primarily artistic in nature, and though movable, are associated with a specific setting. A historic district is a concentration of resources that have a relationship to each other, making the entire group more important than its individual properties. Most registered resources (72%) are historic buildings, consistent with the resource distribution in the 1993 plan. Historic objects are least represented on the registers (1%) of the total.