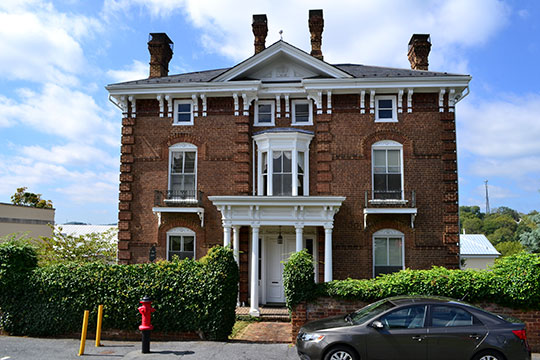 Staunton is an Independent City surrounded by Augusta County.

The city is set among mountains. Round about are fertile fields, grazing lands, and acres of orchards, in spring snowy with blossoms that distil their fragrance through the countryside and in fall heavy with fruit and pungent with the cider odor of ripe apples.

Streets in Staunton drop and wind perilously, following trails once used by Indians, stagecoaches, and bell-decked wagon caravans. Old homes of mellowed brick and of clapboard, not too recently painted, stand close to sidewalks and hide gardens tucked behind them. Children's children have lived in these houses, content to remodel but unwilling to destroy.

At the center of the city is the crowded business district. Narrow streets that are laid here at right angles curve and broaden slightly as they climb toward residential sections. Within the circle roughly defining the city limits are a lake around which a race track has been laid; a cemetery, spacious and landscaped; the grounds of the Western State Hospital and of the Virginia School for the Deaf and Blind; the small neat campuses of two colleges; a park; and a line of railroad tracks running through unsightly slums.

In 1736 William Beverley was granted a large tract of land embracing the present city of Staunton, "in consideration for inducing a large number of settlers to the community." In 1738, when Augusta County was formed, extending from the Blue Ridge Mountains to the Mississippi River and south from the Great Lakes to North Carolina, no provision was made for a county seat. Beverley gave a small stone building at Mill Place, earliest name of the settlement, for use as the county courthouse. In 1761 the general assembly authorized the town of Staunton. Some say the name honored Lady Gooch, wife of Governor William Gooch and a member of the Staunton family, others that the town was named for Staunton, England.

The town was advantageously situated at the crossing of the Valley Pike and the Midland Trail. Travelers westward bound and those journeying southward or northward stopped in Staunton. Here they refreshed themselves at taverns, rested their horses, and replenished their supplies. Through Staunton were shipped luxuries that East sent West, and along the streets of the frontier city great droves of hogs passed on their way to eastern markets. In 1796 Isaac Weld, an Irish traveler, wrote, "As I passed along the road in the great valley and the village called Staunton, I met with great numbers of people from Kentucky and the new state of Tennessee, going towards Philadelphia and Baltimore and with many others going in a contrary direction, "to explore," as they call it, that is to search for lands conveniently situated for new settlements in the western country. This town called Staunton carries on a considerable trade with the back country and contains nearly two hundred dwellings, mostly built of stone, together with a church. Nowhere, I believe, is there such a superfluity of ... military personages as in the town of Staunton." In 1797 Francois Alexandre Frederic, duc de la Rochefoucauld-Liancourt, a French philosopher, visited Staunton on his way to Monticello, and commented in his diary upon the town: "There are eight Inns, fifteen to eighteen stores and about 800 inhabitants ... The inhabitants, like the generality of Virginians, were fond of gambling and betting."

Throughout vast Augusta County Indians gave no end of trouble, for the unreasonable savages resented the white man's theft of their land. Among the Indian fighters was "Mad Ann" Bailey, intermittently a resident of Staunton. She came to America from England as an indentured servant, married Richard Trotter, and brought forth a son. After her husband was killed by the Indians, Ann set out to avenge his death. She always carried an ax and an auger and could chop as well as any man. Dressed in men's clothes, equipped with rifle, tomahawk, and knife, she became a spy, messenger, and scout, killed more than one person's share of Indians, saved stockades, and lived to the creditable age of 83.

Staunton was once the capital of Virginia, though the distinction was unpremeditated and short-lived. In 1781, when the British Colonel Tarleton approached Charlottesville, the general assembly fled to Staunton and continued its sessions in Old Trinity Church.

After the Revolution Dr. Alexander Humphreys, pioneer surgeon and teacher of medical science, who died in 1802, lived in Staunton. Ephraim McDowell, pioneer in the science of ovariotomy, William Wardlaw, Samuel Brown, and other distinguished physicians were pupils of Dr.Humphreys. In 1788, after the disappearance of a visiting Englishman, Dr. Humphreys was suspected of murder when a bag that bore his name and contained the bones of a man was found in a cave. He sued his accuser and received a verdict of "slander." Later Dr.McDowell positively identified the hair as that of a Negro whose corpse Dr. Humphreys probably had used for dissection.

The town was chartered in 1801. The Central Railroad completed its tracks as far west as Staunton in 1854. During the War between the States no battles were fought in the immediate vicinity of Staunton, but both armies used the city as a base for supplies. Staunton became a city in 1887.

It is one of the few cities that have made original contributions to government. In conceiving the city-manager plan, adopted in 1908, it set a pattern that has been followed by about 500 other cities. This wholly American form, based upon methods used in business corporations, has been adopted in several foreign countries. In Staunton a unicameral council of five members, elected by the voters, appoints a city manager, who administers municipal affairs.