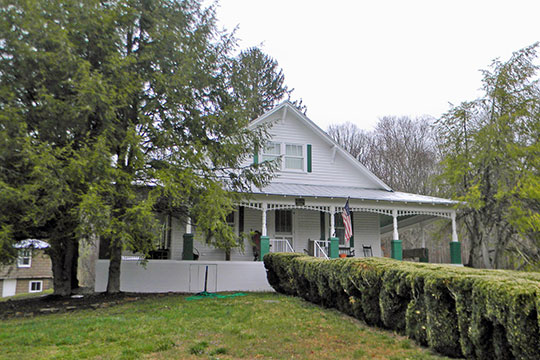 The territory now occupied by Scott County was hunted over and fought for by many tribes of Indians. According to evidence found by the early settlers an Indian village once stood on the south bank of Clinch River near the mouth of Stony Creek.

Next to the rich virgin soil, wild game was perhaps the greatest inducement to the pioneer hunters to enter a wilderness often made dangerous by hostile Indians. Some of these men came as Long Hunters and fur traders, explored the country, and marked traces to be followed by adventurous home seekers and their families. These early explorations and settlements would hardly have been possible without the food that the wild game provided.

Forts were built for protection against Indians. The Block-house, built sometime before 1782 and situated about 4 miles southeast of Big Moccasin Gap at the meeting point of the pioneer roads from Virginia and North Carolina, was one of the most widely known places on the Wilderness Road. It was possibly the only blockhouse in the county, the other forts being log cabins and stockades.

Fort Blackmore, early a famous fort, was situated on an ancient elevated flood plain on the north side of the Clinch River opposite the mouth of Rocky Branch. For many years this fort was on the extreme frontier of Virginia and was used by hunters, explorers, adventurers, and home seekers for rest and refreshment. Daniel Boone was in command of Fort Blackmore and other forts on the Clinch River in 1774 while the militiamen were engaged in the Point Pleasant campaign of Dunmore's war.

Many other forts were built in the early days. In Rye Cove, Crisman's Fort was built in 1776 and Carter's Fort in 1784. Porter's Fort was built on Fall Creek in 1775. Fort Houston was built probably soon after 1774 on Big Moccasin Creek near the present Russell County line and was a place of safety for the earliest settlers in that valley. Dorton's Fort, built one mile southwest of Nickelsville about 1790, was not so exposed to Indian attacks as the forts built earlier. Big Moccasin Gap, a breach in the hard rocks of Clinch Mountain, is perhaps the most important natural feature in the county, for in it centered much of the early history and development. Through the gap Daniel Boone and his companions carved the Wilderness Road to Kentucky in 1775 and through it thousands of pioneer settlers passed on their way to Kentucky and the Middle West. Most of the goods used by the people who lived north of the Clinch River were hauled through the gap before the coming of the railroad. The first railroad in the county was built through Big Moccasin Gap, and most of the main highways now lead toward it.

Thomas McCulloch, the first settler, located in 1769 on Big Moccasin Creek, near Fort Houston. From 1769 to 1782 many people came to live in what is now Scott County, and settlements increased until they reached nearly all sections. In 1790 strongly built houses began to take the place of forts; and one of these, the Old Kilgore Fort House, about 2 miles west of Nickelsville, is still standing. It is probably the oldest house in the county. Convenience to water was one of the main considerations in the selection of home sites, and most of the early homes were located on lowland.

The early settlers were mainly Scotch-Irish, though some were of English descent. They came from eastern Virginia, from Augusta County, Virginia, from Yadkin Valley, North Carolina, and a few from Ireland. Some of the thousands who traveled the Old Wilderness Road on their way westward grew weary of traveling, turned aside, and settled in the Scott County territory. A string of log cabins soon lined the Wilderness Road from the Blockhouse to Kane Gap, in Powell Mountain.

Scott County was formed by an act of the General Assembly on November 24, 1814, from parts of Washington, Lee, and Russell Counties and was named for General Winfield Scott. Its area in 1830 was 624 square miles. In 1856 part of Scott County was taken to form part of Wise County. The first court was held in a dwelling at Big Moccasin Gap in 1815, and the first public free schools were opened in 1870.