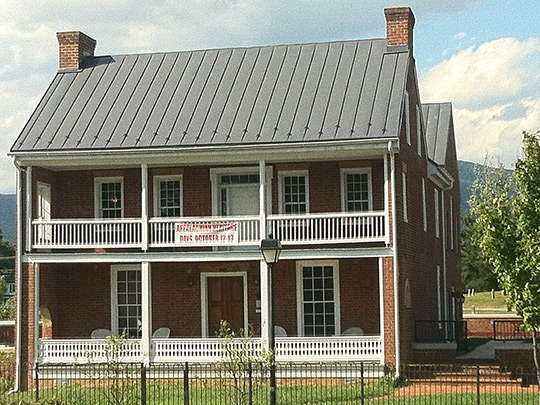 Native Americans began establishing semi-permanent villages shortly after discovering they could cultivate agricultural products such as corn and beans. Batts and Fallam, the first known European explorers in the area, are believed to have stopped in modern Salem where they visited a riverside village of the Totera (or Tutelo) Indians in 1671. Over ensuing generations, intertribal warfare, European diseases, and conflict with settlers decimated the Native population. By the time Europeans began to filter into the Roanoke Valley in the mid-18th Century, the area had been depopulated and was ideal for frontier settlement.

The best known of the early settlers here was pioneer and patriot Andrew Lewis. His frontier estate, Richfield, was in the vicinity of the modern Civic Center. An experienced frontier fighter and colleague of George Washington, Lewis led colonial forces against the Shawnee at the Battle of Point Pleasant in 1774, chasing out of Virginia the last hostile Indian force and securing the Ohio River frontier for the coming Revolution. In the War for Independence, Lewis evicted from Virginia the last British royal governor, Lord Dunmore, at the Battle of Gwinn Island. Fort Lewis, a colonial era fort in modern West Salem, was named in his honor.

After Lewis' death, his heirs sold off portions of his land. James Simpson, an investor who possibly served with Lewis at Point Pleasant, purchased 31-acres for $100 in 1800. On it, he platted a town with the intention of making his fortune. He named the town Salem, although the Bryans, early settlers from Salem, New Jersey, also are credited with bringing the name with them.

On June 4, 1802, Simpson sold his first lot to one Susannah Cole, a transaction since considered to be the establishment of the town. In 1806 Salem was granted its first charter by the state legislature. By then Simpson had departed Virginia and disappeared from the historical record.

While many upstart towns were begun in Western Virginia, few survived infancy. That Salem not only survived but thrived may be credited to five factors. First, the Great Road, the main thoroughfare for travelers headed into the unsettled west, brought a constant stream of customers to local stores and taverns. Next, in 1816 the Roanoke Navigation Company was established to promote riverboat traffic on the Roanoke River, which led to Salem's first "boom." Then in 1838 Salem was chosen as the county seat of the new Roanoke County, which meant that every resident of the county had to visit several times a year, taking the opportunity to buy supplies and sell their crops while in town. In 1847 a school, soon renamed Roanoke College, relocated to Salem, changing the character of the town for the better. Finally, in 1852, the arrival of the Virginia and Tennessee Railroad through Salem guaranteed economic vitality for the town. In fifty years, the wagon road wayside of a few log cabins had grown into a thriving college town, political center, and railroad hub.

It was that very railroad that would make Salem a target in the Civil War. While many from the Roanoke Valley enlisted and fought in every major battle of the conflict, the war only intruded into Salem twice. In 1863 Union General William Averell raided the town, destroying the railroad depot, a warehouse of military stores, and a flour mill, but spared the rest of the town. Six months later, in June 1864, forces under General David Hunter retreated through Salem after being turned away from Lynchburg. Just north of town at Hanging Rock, Confederate forces caught up with Hunter and fought a small pitched battle. While a Confederate victory, it was too small and too late in the war to stem the tide of defeat for the south. One well-known Salem unit, the Salem Flying Artillery, was credited with firing the last artillery shot of Lee's Army of Northern Virginia at Appomattox.

Following the Civil War, Salem faced a period of great adjustment and great civic change. After putting the traumas of war behind, the citizens of Salem set out to better their community. In addition to repairing streets and bridges after years of neglect, the town worked to establish free public schools for both white and black children. In the 1880's the arrival in the valley of a new railroad (soon called the Norfolk and Western) brought an impressive wave of growth. Though felt most keenly in the neighboring village of Big Lick, which exploded into the thriving City of Roanoke, this wave brought ancillary effects to Salem. The "Great Land Boom" caused property values to skyrocket and incited a wave of speculation and investment. The population of Salem more than doubled in ten years, while new businesses, factories, and amenities such as electricity and telephones came to town. The Boom fizzled in the national economic slump of the early 1890's, but by then Salem had changed forever.

In the 20th Century Salem concentrated on delivering to its steadily growing population superlative civic services. New schools, paved roads, and reliable water sources were needs that were demanded and met. If international affairs cast a pall on some of this success fifteen people from Salem died in World War I and as many in the Great Flu Epidemic-the town carried on with aplomb.

In 1922 the adoption of the council-manager form of government in Salem led to an increased emphasis on the improvement of public works. The town paved more streets in order to accommodate the increased automobile traffic through town, improved fire protection, and emphasized improvement of schools and public parks. Since 1922 appointed managers and elected councils have worked together to offer Salemites an unmatched level of services.

The Great Depression, however, stunted growth. While the effects of the economic setbacks were less intense in Salem than elsewhere, locals suffered in countless ways. Welfare recipients in Roanoke County increased from 263 families to 1,407 families in a matter of months. Construction of the Veterans Hospital and the Blue Ridge Parkway helped to alleviate some of the local unemployment.

Salem played a surprisingly active role in World War II. Local men and women enlisted in large numbers, and forty-three paid the ultimate sacrifice. Machined parts manufactured in a local foundry were used to construct the atomic bombs which ended the war. The 50's and 60's saw further wave of growth, much through the annexation of adjacent land from Roanoke County. With the addition of South Salem in 1953 and an eastern tract in 1960, Salem was the largest town in Virginia with a population of more than 16,000. A few years later the threat of annexation by nearby Roanoke City prompted Salem's council to pursue city status. On December 31, 1967, the Town of Salem officially became the City of Salem.

In modern times Salem has developed a nationwide reputation as a sports town, bringing to the community dozens of collegiate and amateur tournaments and championships. Most notably, Salem has hosted the Amos Alonzo Stagg Bowl, the NCAA Division Ill football championship, since 1993. The emphasis on sports marketing and tourism has significantly contributed to the local economy.

For more than two centuries now, the City of Salem has remained a superb place to live, retaining its old-fashioned, small-town community feel while providing residents some of the highest quality schools, facilities and services in Virginia. The development of the Moyer Sports Complex, the Salem Recreation Center, and the Salem Senior Citizen Center, the expansion of Longwood Park and the renovation of Lake Spring Park have enhanced the recreation and leisure opportunities for all Salem residents. The construction of the Salem Rescue Squad facilities and the expansion of the Salem Police and Fire Department facilities have helped to ensure that high quality public safety services are provided. The Farmers Market and Main Street Beautification project brings vibrancy and people to downtown. In addition, the opening of the Salem Civic Center in 1967, Lewis Gale Hospital in 1972, Salem High School in 1977, Salem Stadium in 1985, the Salem Museum in 1992, Memorial Stadium in 1995, and the Salem Visitors' Center in 1997 have all contributed to making Salem a thriving, progressive city.