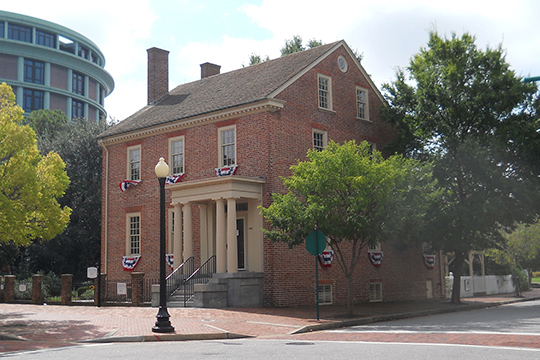 Created from Norfolk County in 1682, the City of Norfolk is located along the eastern seaboard in Tidewater, Virginia. It is bounded to the east by the City of Virginia Beach, the cities of Chesapeake and Portsmouth to the south and west, respectively, and to the north by the Elizabeth River and the Chesapeake Bay. Originally a borough, Norfolk achieved city status in 1845 with a total land area that encompassed 1.3 square miles.

A significant period of growth in the city began during the French and Indian War (1754-1763), when the population grew from 1,000 to 6,000 by the time of the American Revolution (1775-1783). Norfolk emerged slowly as streets became lined with elegantly styled Federal townhouses. With the hostilities between France and England beginning in 1793, Norfolk resumed a role as an important seaport, prospering through the supply of ships for both countries. This significant role, interrupted numerous times throughout the 19th century, became stabilized after the Civil War (1861-1865). The City of Norfolk grew into a major port of trade with cotton, corn, flour, peanuts, tobacco, wheat, timber, and coal becoming its main exports. Long-time area merchants and newcomers to the city re-opened Norfolk to the cotton trade, making it one of the two largest cotton ports in the nation during the Reconstruction and Growth Period (1865-1917). Additionally, lumber and shingle mills, along with other commercial and industrial ventures, ensured the area's continued stability and encouraged the physical and residential growth of the city northward from the commercial core along West Freemason Street.

Along with the post-Civil War economic growth came an increasing population and expanding city boundaries. In the period between 1870 and 1914, Norfolk saw substantial changes in its residential character, growing from a small urban, port town to an expanding city with many outlying suburban communities. This suburban growth, induced in part by the electric streetcar established in 1894, occurred in phases beginning after Reconstruction and continuing well into the mid-20th century.

In the late 19th and early 20th centuries, Norfolk underwent five significant boundary expansions, in 1887, 1890, 1902, 1906, and 1911, increasing the city's area from 1.3 to nine square miles. The first boundary expansion to occur since 1845 was in 1887, when the city annexed Brambleton, a residential community separated from Norfolk by Newton's Creek. The acquisition of Brambleton increased the city's population and encouraged future city annexations. In 1890, Atlantic City was added, which, unlike the established residential community of Brambleton, was primarily undeveloped land that attracted developers wishing to improve housing for the growing population.

The expansion of Norfolk during the late 19th century mirrored that of many cities throughout the country, as the development of the streetcar became synonymous with the expansion of city boundaries and suburban growth. The electric streetcars that had replaced the original horse-drawn cars enabled the suburban development to extend farther and farther outside the city in accordance with the greater speed afforded by the electric cars. Major players in these expanding suburbs were often real estate development companies that laid out and advertised "planned" residential neighborhoods on the outskirts of major cities. The earliest of these outlying planned communities, such as Llewellyn Park in New Jersey (laid out in 1855), were firmly established upper-class neighborhoods. Yet, with the growth of electric streetcar systems in the 1880s and 1890s, greater numbers of middle-class subdivisions began to ring American cities.

In Norfolk, this transformation first began in 1866, when the first street railway franchise was granted to the Norfolk City Railroad Company. In 1869, the company had laid the first tracks along Main Street, later to be extended along Church and Granby Streets reaching the residential areas north of the city. By 1894, the most desirable areas for development were those located along the rapidly expanding electric streetcar lines, which replaced the original horse-drawn lines of the 1860s. Expansion of the city spurred by this modern form of transportation occurred primarily after the turn of the 20th century with the annexation of numerous tracts of platted land: Park Place (VDHR 122-5087), which included an 1890s suburb of the same name north of the city, was annexed in 1902; the port town of Berkley (VDHR 122-0824) in 1906; and, in 1911, the unimproved tract of Lambert's Point and the small community of Huntersville.

Norfolk investors, encouraged by the rapidly expanding transportation system, underwrote dozens of suburban improvement companies during this period. In 1890 alone, fifty-eight land and improvement companies were chartered in Norfolk. The first, and most significant residential development in Norfolk of this period, was the city's first planned suburb of Ghent. Originally a 220-acre tract of mostly rural land, Ghent was subdivided in 1890 by the newly established Norfolk Company and developed with freestanding, single-family dwellings that appealed to middle- and upper-middle-income residents. Following the development of Ghent, several suburban residential communities began to take shape, including Riverview (1900), Lafayette Residence Park (1902), Colonial Place (1904), Winona (1909), and Ballentine Place (1909).

The explosion of suburban real estate interests and a limited clientele caused stiff competition among the various suburbs. Thus, the expansion of many of these suburban neighborhoods was limited during the early 1900s through the 1910s. During World War I (1914-1918), Norfolk's location and prosperous industries made the port city an obvious center for military and civilian production. The expansion of wartime industry in the World War I to World War II Period (1914-1945) greatly impacted the city's suburban development as an influx of workers swelled the city's population, creating a demand for housing that lead to the rapid development of many of the suburbs platted in the early years of the 20th century.