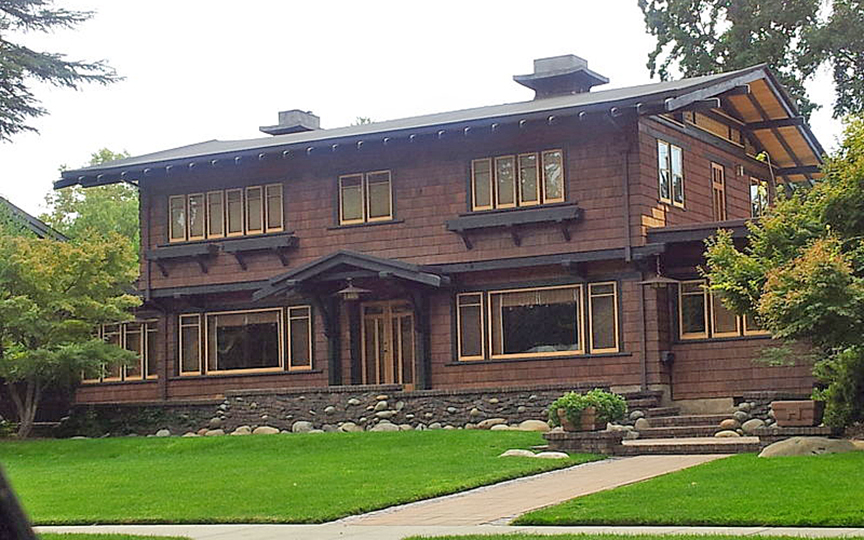 California's [1] history is so romantic and filled with legend that it is fitting that the region was named for a fictional island peopled by pagan Amazons, the setting of a 16th century Spanish book popular when that nation's explorers first came to this part of North America's Pacific Coast. continued ]

The Spaniards, of course, were hardly the first to discover this land of wonder and extremes. The earliest Californians were adventurous Asians who made their way across the Bering Straits to Alaska thousands of years ago when a warmer climate and a now-vanished land bridge made such travel easier.

California's contact with Europeans began in the mid 1530s when Cortez's men ventured to Baja California. Not until 1542 did Spaniards sail north to Alta California, and Juan Rodriguez Cabrillo's expedition of that year made landings as far north as modern Santa Barbara.

After 1769, the life of the California natives who came in contact with the Spanish was reshaped by the mission fathers, not the townspeople of the pueblos or the soldiers of the presidios. The Franciscans came to California not merely to convert the tribes to Christianity but to train them for life in a European colonial society.

In 1808, Spain's American colonies, one by one, began to fight for independence. Even before this spirit spread to Mexico, California felt the effects of the rebellions, for Spain's hard-pressed navy could not spare ships to bring supplies to the missions, presidios, and pueblos north of San Diego. Thus, in the dozen years that followed, local authorities relaxed restrictions on trading with non-Spanish merchants so that the colony could survive, and Californians became accustomed to contact with sailors, traders, hunters, and trappers from England, France, Russia, and, of course, the United States.

The Mexican government and Spanish-speaking Californians became increasingly suspicious of the motives of the "Americans" of the United States. In 1844, John Charles Frémont led a party of Army topographical engineers that "accidentally" crossed the Sierras into California and traveled the length of the San Joaquin Valley before making their way home. In 1845, a commodore in the U.S. Navy, misinformed about relations between his country and Mexico, sailed into Monterey harbor and declared a victory in a non-existent war. Then Frémont returned in December 1845, ostensibly to survey the passes through the Sierras being used by American emigrant trains.

In 1847, all waited restlessly for the fighting to end outside California. The soldiers from New York contented themselves with garrison duty and odd jobs until word came of peace, but the Mormons were discharged in the summer of 1847, and many went to work for Johann Sutter. With peace, Sutter could finally proceed with his plans to lay out a town near his fort to attract some of the expected hordes of American settlers who would now stream through the passes of the Sierras. A town would require lumber, and for this Sutter needed a nearby sawmill so that he could reap the profits of every process in creating "Sutterville."

In the next year, close to 100,000 people went to California from the United States, Europe, and every other corner of the globe. Gold-seekers from Australia, New Zealand, Hawaii, and China continued to sail across the Pacific along well established trade routes. The journey was far more complicated for citizens of the United States. A voyage from the East Coast to California around Cape Horn was 17,000 miles long and could easily take five months.

Three settlements were principal beneficiaries of the Gold Rush. San Francisco, a sleepy village called "Yerba Buena" until 1847, became California's major seaport, far eclipsing San Diego, San Pedro, and Monterey to the south. Almost every immigrant who came by sea passed through the town as did most goods imported from the outside world. And the rowdy city, crowded with hotels, saloons, and gambling houses, was the place to which weary, dirty miners came to spend their hard-earned wealth. In 1845, Yerba Buena had fewer than 400 residents; the 1860 census enumerated 56,000 San Franciscans.

The first federal census conducted in California in 1860 counted 308,000 residents--population had almost tripled since 1847. While gold mining was still an important factor in the state economy, Californians were finding other ways to earn a living. By the mid 1850s, the state's farms had made California self-sufficient in raising wheat. Cattle ranching flourished, and by 1860, local ranches produced four times as many cows as they had in 1848. Still, everyone in the booming state was painfully aware of the difficulties of bringing goods in and sending them out: there was still no rail link to the eastern United States.

Expansion of rail service in California had one result that was never anticipated by the businessmen and politicians of San Francisco and Sacramento who worked so hard for the transcontinental link: Northern California lost its monopoly on the state's population and wealth. Without a rail link, Los Angeles, the first city of Mexican California, remained a sleepy village compared to the booming towns to the north. However, local business and political leaders were determined that Los Angeles would not be bypassed when rail lines came south, and city voters agreed to what was, in effect, a bribe to the Southern Pacific to bring the line directly through the city. Extension of the transcontinental rail line to Los Angeles triggered a boom in the southern part of the state, a boom that picked up even more steam once the Santa Fe Railway gave Los Angeles its own direct line to the East in 1885, a line in direct competition with the Southern Pacific. Los Angeles's population quadrupled in the 1880s, and doubled again by 1900, when it had 100,000 residents.