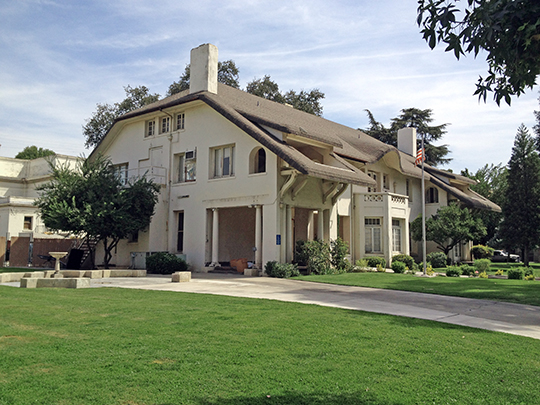 Fresno was founded in 1872 by the Central Pacific Railroad Company. It became the county seat in 1874 and was incorporated in 1885. Streetcars were introduced in 1892 and streetcar suburbs soon followed.

Fresno, world's "raisin center" and principal marketing, shipping and purchasing point for the fertile San Joaquin Valley, is almost in the geographical center of the State.

Fresno, unlike many California cities, is purely an American growth. Spanish and Mexican expeditions passed up the site as desolate and barren. Indian troubles scared away settlers of the period preceding the gold rush, and the Forty-niners, bound for the Sierra foothills, hurried across the valley to the diggings. After the gold rush, the Americans turned to stock raising and the site of Fresno supported thousands of cattle.

The first permanent settlement on this site is supposed to have been made in the 1860s by A. J. Manssen, a Hollander who sank a well, built a watering trough, and up a sign labeled "Horse Restaurant."

A few families joined Manssen, but the place remained "the sorriest and most woe-begone little settlement on the map" until 1872, when it became a station on the Central Pacific Railroad, which pushed through the valley that year. The railroad builders staked out a town, which they called Fresno (Spanish for "ash tree") Station. The ash trees were in the foothills, not near the embryo town.

In 1874 Millerton, the only important settlement in the area, voted to relinquish the county seat to Fresno Station; soon after, practically the whole population of Millerton moved to the new county seat in order to be on the railroad line. In those days Fresno's main street was "a rough depression, billowy, dusty in dry weather and in winter a mudhole for its three blocks to the railroad station." The countryside was so bare that boys had to play hide-and-seek in the graveyard. Cows, horses, dogs and pigs wandered about in the streets, and flocks of sheep were driven through the town.

With the spread of controlled irrigation and the realization that the soil was extremely fertile, new crops were developed and the town grew fast. Partly through the efforts of Agoston Haraszthy, Hungarian financier and investor, grape raising was popularized in California. Americans planted vines in their wheat fields. Italians, French and Swiss started growing grapes on 20-acre parcels acquired for that purpose.

The dry white wine made by foreign growers was of indifferent quality, but the continuous sunlight led naturally, after about 1874, to the preparation or raisins. An output of 103-million pounds in 1894 overloaded the market and the price dropped to two cents a pound. The Raisin Growers Association, a co-operative group organized in 1898 for the protection and efficient handling of the raisin industry, still controls the bulk of the crop. During the World War [WW I] profits were large because raisins were a convenient food to pack and ship. When it was discovered that raisins are rich in iron, and advertising campaign was launched with the slogan "Have you had your iron today?" and raisins sold in five cent packages at candy counters. Today 60 percent of the United States' raisin production comes from the Fresno district.

In 1886, Frank Roeding and his son had begun experiments with Smyrna fig culture at their own expense and in the face of open ridicule from other horticulturists. In June, 1889, they learned the secret of caprification (cross-fertilization of the Smyrna fig by the fig wasp), and the industry was at last able to compete with foreign importations.

With a population of 12,470 in 1900, Fresno adopted its first city charter. Agriculture progressed rapidly in the next ten years. Cotton growing was introduced in the valley and cotton is now a leading product. Manufacture of sweet wines supplanted that of the dry wines.

Manufacturing kept pace with agricultural growth, and Fresno now ranks fifth among California cities as an industrial center. It has 370 manufacturing establishments including flour and lumber mills, machine shops and foundries, potteries, brickwork, and soap factories.

Tall modern buildings rise abruptly from the flat valley floor, surrounded by residential sections planted with trees to provide shade in the sweltering heat of summer. The business district, in the central and oldest part of town, grew around the railroad station, with the streets parallel to the tracks and diagonal to the cardinal points. Later streets were squared with the compass, and a set of 45-degree intersections resulted, all around the original square. Residential preference has extended the city mainly to the northward and eastward, where homes are set back from the street along broad avenues lined with eucalyptus and palm trees.

From the city limits the vineyards radiate in seemingly endless rows, set exactly 10 feet apart. The grapes ripen in August, September, and October, and are placed on trays to dry in the sun. With these agricultural environs, and with the country's largest fig gardens only four miles away, Fresno naturally is predominantly a farming community, despite its skyscrapers, neon lights, modern store fronts, and busy traffic. Farm markets are held on Fresno Street alongside Courthouse Park on Tuesdays, Thursdays, and Saturdays, and fresh vegetables, fruits, and flowers are sold direct to the consumer. Farm workers and growers throng the streets on Saturday nights, and the Fresno District Fair in September is an event of major local importance.

Across the Southern Pacific tracks, opposite the business district, is the foreign section where curious articles of food are displayed in shop windows, Spanish motion pictures and Japanese plays are advertised, and men of many nations idle on the sidewalks. Armenians outnumber all others in the 15 percent of Fresno's population that is of foreign extraction. Forced out of Armenia by hardships and persecution, they found the Fresno area similar in soil and crops to that of their homeland, and settled here in numbers. There are two Armenian restaurants specializing in native dishes, three Armenian weekly newspapers, and many small retail businesses are Armenian-owned.