Photo: This 4 bedroom Colonial at 105 Warden Road was built in 2002. It was sold by Keller Williams* after being on the market for only one week (7 days). 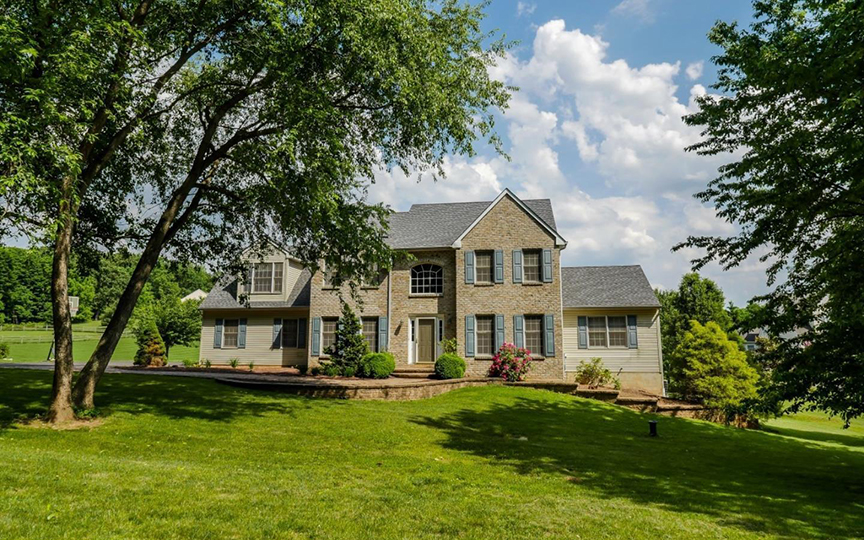 Established in 1819, Doylestown Township once included what is now Doylestown Borough and parts of Buckingham, New Britain, and Warwick Townships. Notable within the township is "Fordhook Farm," established at the turn of the 20th century as a seed and plant test farm for the W. Atlee Burpee Company; it is listed on the National Register of Historic Places along with three additional resources: Fretz Farm, Highland Farm (the Oscar Hammerstein House), and the Tabor Childrens' Home. Edison is a locally-recognized historic village.

Also of note at that time, as reported in George MacReynold's Place Names in Bucks County, "The first experimental piece of improved road building in Bucks County was laid down in Doylestown Township in the year 1900 between Vauxtown and the Doylestown Boro line. The construction was the type known as Telford (for Thomas Telford, Scottish engineer, 1757-1834), the work being done under the superintendence of Edmund G. Harrison of the U.S. Dept. of Agriculture.

A considerable part of Doylestown township was embraced in the lands which William Penn conveyed to the Free Society of Traders in 1681. In this section lay a tract of over eight thousand acres, whose north-eastern boundary was the Swamp road, and which extended into the townships of Warwick, New Britain and Hilltown. When the Society lands were sold by trustees, Jeremiah Langhorne bought seven hundred acres in Warwick, bounded on the north-west by the line of New Britain, and this purchase embraced all the site of Doylestown borough lying south-east of Court street. At his death he divided three hundred and ten acres of this tract that was unsold, between two of his negro men, for life — Cudjo and Joe. Cudjo's title was extinguished by the executors in 1751, and his portion sold to Isabella Crawford. Joseph Kirkbride, of Falls, was an early land-holder in Doylestown, and probably afterward a settler, but this we do not positively know, although some of his descendants lived there. His tract lay north-west of the borough and came down to the line of Warwick, now Court street. On the 30th of March, 1730, he conveyed one hundred and fifty acres to Edward Doyle, originally Doyl, who was then a resident of New Britain, but how long he had been there is not known. Joseph Fell took up a tract north-east of the town extending out to Pool's corner. One hundred years ago the land-owners immediately around the borough of Doylestown were Edward and William Doyle, Joseph Kirkbride, William and Robert Scott, and Joseph and Samuel Flack. Jonathan Mason was an early proprietor of a large tract of land in the vicinity of New Britain church, and probably purchased from the Free Society of Traders.

The removal of the county-seat to the hamlet of Doylestown, through which the dividing line of Warwick and New Britain ran, in 1812, called for the formation of a new township around the public buildings. In August, 1818, a number of the inhabitants of these townships petitioned the court, setting forth that "they reside on the extremity of the townships of Buckingham, Warwick, New Britain, and Plumstead, and that it would be to the interest and advantage of the said petitioners to have a new township, making the court-house the centre thereof, or as nearly so as may be convenient. The court was asked to appoint three impartial men to view and lay out the township agreeably to law, and in accordance with their prayer Thomas G. Kennedy, Thomas Yardley, and Thomas Story were selected to perform this duty. They reported to the November term following in favor of a new township, to be called Doylestown, to be formed out of the territory of the three contiguous townships, as follows from New Britain five thousand three hundred and fifty acres, reducing her territory more than one-third, from Warwick three thousand five hundred and fifteen acres, and one thousand one hundred and eighty-five acres from Buckingham. The south-eastern corner of the new township, reaching down to Bushington, was the part cut off from Buckingham. The report was confirmed, and the municipal government of the new township was duly put into running order, the late John D. James, many years crier of the courts, being the first elected constable. The area was ten thousand and fifty acres, or about fifteen and a half square miles. It was enlarged a few years ago by taking in the north-west corner of Warwick, containing the alms house farm and buildings. The report of the jury was accompanied by an elaborate map, including several of the surrounding townships, drawn by Thomas G. Kennedy, one of the jurors.

This township contains but one village worthy the name, Doylestown, the county-seat, but it has several hamlets. A mile below Doylestown is the Turk, of a dozen dwellings, and a tavern that swung the head of a Turk on its signboard for many years. As long ago as 1814, when John Brunner was the landlord, it was called Turk's Head. An attempt was made many years ago to change the name of this hamlet to Houghville, but the public would not consent to it, and it is still called by its old name. When, in 1810, it was decided that the county-seat should he removed from Newtown, John Hough, who owned a considerable tract of land about the Turk, laid out the plan of a town, and offered it for the seat of justice. The plat extended north from the Turk tavern to the head of the mill-pond, with squares laid out on each side of the Easton road, with intersecting streets every few hundred feet, one crossing the mill-race just below the breast of the dam and running toward Newtown. Sites for the "court," "office," and "gaol" are marked on the ridge near Thomas Doyle's house, the first two on the west side of the Easton road and the other on east, with a broad street in their front. The other hamlets are, New Britain, the seat of the Baptist church of that name, on the south-western border, Bushington [see: Furlong], on the York road, on the east, and Cross Keys, on the Easton road, on the north, each partly in Doylestown and partly in the adjoining township. The New Britain Baptist church, graveyard and grounds lie wholly in Doylestown. The village of Doylestown, the seat of justice of the county, is situated in the eastern part of the township, a mile from the Buckingham line. The bridge that spans the Neshaminy at Castle valley was built in 1835. The first stone house in that vicinity, torn down over half a century ago, is said to have stood on the farm now owned by Ezra Smith, and was a story and a half high, with steep pitch-roof, oaken doors in two folds, and windows with shutters, but no glass. A mile west of Doylestown is an old-fashioned stone Mennonite church, built many years ago. Among the ministers who have officiated there we find the names of Kephart, Jacob Kulb, Abraham Godshall, John Gross, Isaac Godshall, Isaac Kichert, Jacob Hiestand, and Samuel Gross, and of deacons, Yoder, John Haldeman, and Daniel Gross. It is the oldest church edifice standing in middle Bucks county.

The surface of Doylestown is rolling and diversified, with the spurs of Iron hill breaking it along its north-west boundary, the soil fertile and well-cultivated, and its whole area in view from the top of the court-house cupola. It is well-watered by the winding west branch of the Neshaminy and its tributaries which afford several tine mill seats. On an old title-paper Cook's run is written "Scooke's run." The township is intersected by numerous roads, some of which have been turnpiked. The two oldest, which are still main highways, are the Easton road laid out in 1723 from the county line to Dyerstown, and that from the York road at Centreville to the Schuylkill at Norristown. The former was called the Dyer's mill, and the latter the North Wales, road for many years, and they intersect each other nearly at right angles in the heart of the village of Doylestown. The road from Doylestown to the York road above Bridge Valley was laid out in 1764, the signers to the petition being Nathan McKinstry, Henry Miller, John Robinson, William Corbit, Archibald Crawford, Charles Janney, William Doyle, John White, and Andrew McMicken. In 1752 a road was laid out through what is now Doylestown, but then Warwick, beginning in the Bristol road at a corner between John Ewers and Joseph Hough, crossing the township and coming out into the Newtown or Swamp road just below Pool's corner. This road crosses the turnpike at the Turk, and Neshaminy at Deep ford. It was surveyed by John Watson August 13th, the day the viewers met.

The Swamp road, which forms the north-east boundary of Doylestown, and runs through Quakertown into Milford township, was laid out in 1737, and was then called the Newtown road. In 1752 a road was laid out from the Easton road, just above the Turk, to the lower state road, and was surveyed by John Watson. On the morning of January 30th, 1809, the house of Jacob Kirkbride, now Judge Chapman's farm-house, half a mile north-west of Doylestown, took fire from an ashpan in the cellar-way, and was burned to the ground. Mr. and Mrs. K. were absent, on a visit to friends in Falls, leaving in the house two servants and five children between the ages of three and twelve, who escaped in their night clothes. We have no means of telling the population of Doylestown township when it was organized, as it is not in the report of the jury that laid it out. At the first census afterward, 1820, it contained 1,420 inhabitants; in 1830, 1,781, and 362 taxables, which included the village of Doylestown, for that had not yet been incorporated; in 1840, 1,221; in 1850, 1,307; 1860, the population is put down at 287 in the census report, which is an error, and in 1870 it was 1,954, of which 186 were of foreign birth.