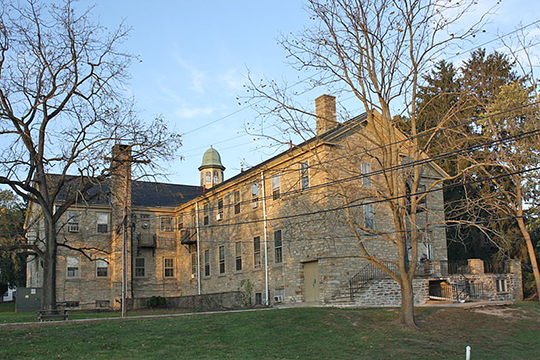 The Philip H. Fretz Mansion, (also known as the Tabor Home for Needy and Destitute Children), is located at 601 New Britain Road in Doylestown Township. It was listed on the National Register of Historic Places in 1987. Portions of the content of this web page were adapted from a copy of the original nomination document.

... a large brownstone Victorian mansion built by Philip H. Fretz in 1879 in the Second Empire Style with undertones of the Chateauesque style. The building is asymmetrical in design, of generous proportions, consisting of a main "L" shaped block two and a half stories in height having five bays width on the entrance (east) facade and five bays width on the south facade, a two and a half story hipped roof pavilion with the angle of the "L" and a rear one and a half story library wing attached to the southerly wing of the "L". The brownstone is patterned and the roof is a very steep polychromatic slate and multi-gabled. The building is currently vacant. [1987] While there have been some changes to the exterior, the overall integrity of the building remains good. There have been no major additions to the building. The nominated property contains one contributing building.

The Philip H. Fretz Mansion exhibits high style Victorian architecture tempered only slightly by the conservative nature of rural Doylestown. Historic site surveys of central Bucks County indicate that this house is a fairly unique blend of design and construction. ...(the) Tabor Home was an inter-denominational Christian home providing shelter for children whose parents could not provide for them. Tabor Home was important for its philosophy of keeping families (siblings) together when placement was necessary. This policy was rare among other chidren's institutions. This practice was accomplished by admitting children of all ages and by being a co-educational institution.

The building ... was originally constructed for Philip Henry Fretz (1846-1910), the owner of the nearby Turk Mills from 1879 until 1913. Fretz had the house constructed in 1879. Fretz, from a prominent Bucks County family, worked in the jewelry business in New York City and as a banker in San Francisco. His house reflected his cosmopolitan background. Returning to his native Doylestown Township, Fretz had his handsome home constructed.

There are only two other houses in the surrounding area that are quite similar in massing, styles and construction. These two houses are the Ruckman mansion in Solebury Township and the Darlington mansion (1878) in Doylestown Borough. Although much larger, the Tabor Home also resembles another smaller Ruckman house and an addition to the Thoma Lyman house (1873) both in Doylestown Borough. A common denominator among all of these buildings are the materials; brownstone and multi-colored slate. The styles are similar as well. The Darlington mansion and the Lyman house both have steeply pitched gables, round arched windows, an attic story, and similar cross gables.