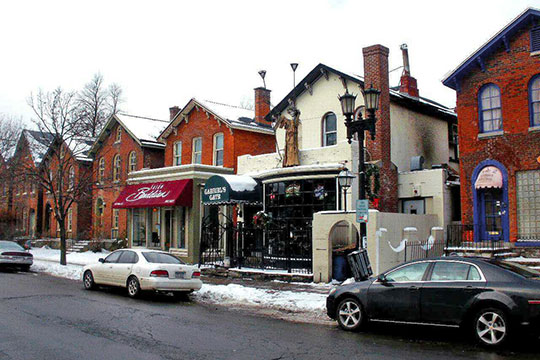 The Allentown Historic District was listed on the National Register of Historic Places in 1980. Portions of the content on this web page were adapted from a copy of the original nomination document. [1]

Allentown Historic District lies within the city of Buffalo about one-half mile north of the downtown business district. Lake Erie lies three quarters of a mile to the southwest. The district lies on a slight hill which is highest at North Street, the northern boundary of the district.

Approximately 733 buildings are in the Allentown Historic District on 29 blocks, or parts thereof. (Dependency buildings were not included in this total.) Most buildings are residential houses although there are some 1890's commercial buildings and residential hotels as well as three churches. The commercial structures are mostly along Allen Street and upper Elmwood Avenue, but there are a few office buildings along North Street. The residential hotels lie along Allen and North Streets. Two of the churches are at the north end of the district while the third is at the southern end. In addition to these types of buildings there is one movie theatre on Allen Street, three schools, with one on Day's Park and the other two at the intersection of Elmwood and Edward, a casket company on Virginia Street, and a printing business on Allen Street.

There are three park areas in the Allentown Historic District, all of which Fredrick Law Olmsted worked on. The two residential greens were redesigned by Olmsted in the late nineteenth century, and Symphony Circle was the first circle he laid out in Buffalo as part of his comprehensive park plan for the city.

The street plan of Allentown is formed by two distinct early nineteenth century grid patterns, those of the Holland Land Company and of the New York State's village of Black Rock. The resulting irregular intersection of the two regular block patterns running north and northeast respectively forms the angular blocks found in the west section of the district.

The architectural features of most buildings are remarkably intact and most are well maintained especially in the east and north sections of the district. About three fourths of the buildings are of frame construction with the remainder being brick.

The area began as farmland and was developed residentially primarily between 1850 and 1900. There is some early twentieth century housing stock on lots that were further subdivided or on sites of earlier buildings. The styles of the buildings reflect the tastes of builders in the late nineteenth century. The interpretation of these styles in Allentown often differed from the pure definition, but the characteristics can be attributed to a particular style. The styles of the buildings include: 6 Gothic Revival styled, 125 Italianate styled, 24 Second Empire, 92 with Queen Anne styling, 106 with Eastlake styling, 15 with Stick styling, 5 with Shingle styling, 56 Colonial Revival styled, and 196 plain styled frame houses.

The majority of buildings are residential houses but forty-three are commercial, twenty are apartment buildings and eleven were carriage houses. There are fourteen buildings which have been identified as intrusions.

The physical characteristics of Allentown today are mostly the same as they were during the late nineteenth century. Most residential streets have many trees, and houses built close together with between two and three stories. The commercial sections have brick commercial buildings, most under five stories, frame commercial buildings, and residences converted to commercial use. North Street is lined with large houses with wide lawns and trees, some apartment buildings and a few residential and office buildings which are intrusions. Symphony Circle has residential houses with wide lawns, a music hall and an intrusion nursing home. Arlington Park is a small green with many trees and houses on roomier building plots. Day's Park has a center green with few trees and a school, which is an intrusion, at the northwest end.

The boundaries of the Allentown Historic District were chosen because they reflect a distinct section of Buffalo. The architecture of the surrounding areas changes drastically within a block of the borders. To the east lies Delaware Avenue which has numerous intrusions. North of the district the area developed somewhat later than Allentown with larger houses and building plots. To the west and southwest the buildings have been altered extensively thereby losing most integrity. To the south begins the downtown business district which has a different ambiance.

Allentown was named after Lewis Allen who originally owned the parcel of land that is now designated as Allentown. His land stretched from Main Street over to Day's Park. Allen Street is reported to have been the trail that his cattle followed. The name "Allentown" has only been used for the area in the past twenty years as the residents have tried to foster an awareness of the distinct history of this neighborhood. Allentown developed essentially as a streetcar suburb of the city after the Civil War. There was some development before that time but the boom in development after the Civil War is what determined the character of the present Allentown. The streets are basically an extension of those laid out in downtown Buffalo by Joseph Ellicott of the Holland Land Company. Cottage Street, the western boundary of the district, is a result of the conversion of Black Rock, at one time independent of Buffalo, and Buffalo's development. North Street was the city line in 1852, being basically rural at that time. As the city expanded, this street became developed by the well-to-do, who could commute to their downtown offices. Many of the original residences of North Street have been replaced by grander houses that were put up in the late nineteenth century. The Bemis-Ranson House, the Warren House, and the Metcalfe House are good examples of the type of houses that were built in this period. The early period is represented by Italianate and Second Empire style houses, with those remaining being on the south side of the street. As North Street became the most prestigious residential street in the city, the surrounding streets developed. The houses on the east side of the district are more substantially built, those towards the western end of the district are smaller and of frame construction.

Many noteworthy people of local and national importance have had an association with Allentown. Lewis Allen was a prominent citizen in early Buffalo and a good friend of Grover Cleveland, whose wife was brought up at 168 Edward Street. George Coit, one of Buffalo's earliest settlers, was instrumental in bringing the Erie Canal to Buffalo. Symphony Circle was the first circle laid out by Frederick Law Olmsted when he came to Buffalo in 1869. Originally called "The Circle" by Olmsted, it still retains its original appearance. First Presbyterian Church, at One Symphony Circle, is an excellent example of the Richardsonian Romanesque style. Designed by the prominent local architectural firm of Green and Wicks, the interior has Tiffany light fixtures and stained glass. Green and Wicks, who designed the original section of the Albright-Knox Art Gallery, also built two houses on North Street; numbers 208 and 256. The apartment building at 230 North Street was also designed by Green and Wicks. The Birge Mansion, on the northeast quadrant of the circle, was built by Little and Browne of Boston for George K. Birge. George Birge was president of the Birge Wallpaper Company and a major stock holder in the Pierce-Arrow Motor Company. He was also on the Board of Directors for the Pan-American Exposition. The house is unique in Buffalo. One enters in the rear of the building and goes into the two-story court from which all the main rooms of the house can be entered. Kleinhans Music Hall, which is at the southwest quadrant of the circle, was designed by Eliel Saarinen in 1939 and is the home of the Buffalo Philharmonic. The music Hall is an excellent example of the International Style. After Frederick Law Olmsted finished the park system for Buffalo, he was called back to redesign and landscape other existing parks. At this time he landscaped both Arlington Park and Day's Park. In front of the school on Day's Park (The original school has since been replaced.) he placed a circular walkway so that the students would not trample the grass. The circular sandstone planting area that was in the center of this walkway is still in existence, while the trees in the park have all replaced.

The house at 173 North Street, known as the Warren House, was designed by George Cary, a prominent local architect. He was commissioned by New York State to design the New York State buildings for the Pan-American Exposition. The only permanent building built for the exhibit, the Warren House now houses the Buffalo Historical Society. The Metcalfe house at 125 North Street was designed by McKim, Mead and White. Built in 1884, the house was their first commission in Buffalo. The firm eventually built three other residences in Buffalo but this is the only one displaying their early Shingle styling. The other houses are from their late period and all are derived from classical styles.

F. Scott Fitzgerald lived at 29 Irving Place when he was a child. Some of his earliest plays were acted out in the attic of this house. Katherine Cornell was brought up at 174 Mariner Street. The theatre group that her grandfather started in his attic eventually organized as the Buffalo Players, an amateur theatrical group that staged shows at the Allendale, at 203 Allen Street. The Allendale was built in the 1920's with Italian Renaissance styling. Built as a local vaudeville playhouse, it is now being used as a movie theatre. Lars Potter, who was instrumental in the organization of the Buffalo Players, still lives at 60 Irving.

Allentown is recognized throughout Buffalo and western New York as a distinct section of the city. While the individual buildings are important, the fact that Allentown retains its nineteenth century identity as a neighborhood within the city of Buffalo makes it unique. All facets of the nineteenth-century development of Buffalo can be viewed in Allentown. The mansions on North Street display the wealth that was brought to the city by the Erie Canal and the Industrial Revolution, in which Buffalo played major roles. The workingmen's cottages on Hudson Street are good examples of the type of housing that many Buffalonians lived in during this time period. The city has recognized Allentown by making it a Preservation District within the city of Buffalo.

A Preliminary Report Respecting a Public Park in Buffalo. Buffalo: Printing House of Matthews and Warren, 1869.

Cornell, Katharine. I Wanted to be an Actress. New York: Random House, 1939.