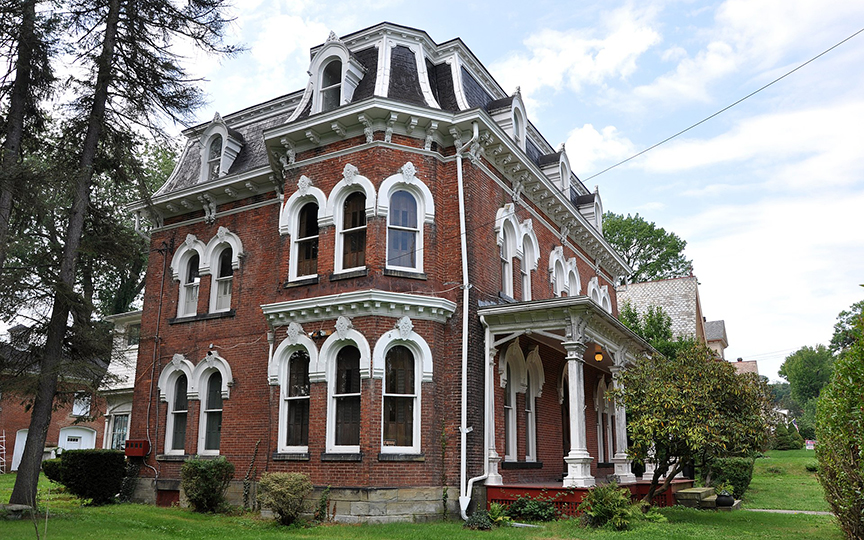 The name, Second Empire, referred to a style that developed during the "Second French Republic" (or "Empire" – the era following France's 1848 Revolution) and principally during the time of Emperor Napoleon III. The Emperor charged Baron Haussmann to transform Paris into "the world's city of high fashion." Attendees from around the globe at the Paris expositions (1855 and 1867) helped spread the popularity of the style beyond France.

France lost its war with Prussia in 1870, Paris became less influential as a "center of fashion," and by the 1880s the popularity of the style gave way to new fads like the Queen Anne style for residences (circa 1870-1900).

Late 19th century Second Empire designs are common in the Northeastern and Midwestern United States. Second Empire was considered very modern and inspiring ... after all, it began in Paris. It became popular for remodeling older buildings as well as new construction and was adapted to a wide variety of projects: public buildings, commercial structures, museums, college buildings, hotels, and, of course, residences. This style was used for many public buildings in America during the presidency of Ulysses S. Grant (1869-1877).

A main characteristic of Second Empire is the Mansard roof (double pitched hip roof). It is named for Parisian architect, Francois Mansart (1598-1666), noted for his introduction of a simplified Baroque style to France. He often used the roof style in his designs; the upper part usually intersects with a flat roof which extends over the middle of the building. One advantage of the "Mansard roof" was that it allowed for commodious upper-attic storage space.

Molded cornices above and below the lower roof slope and decorative brackets beneath eaves, balconies and bay windows also help to identify the Second Empire style.

There are a number of other identifying features which may or may not have been used, such as, roofing materials with decorative patterns of color and textures; iron cresting above the upper cornice; arched windows; small entry porch with paired columns; paired entry doors, sometimes with glass in top half; one or two-story bay windows; one-story porch; rectangular or square tower which could be of equal height or higher of the top most floor, typically with a mansard roof and small dormer window in each side.