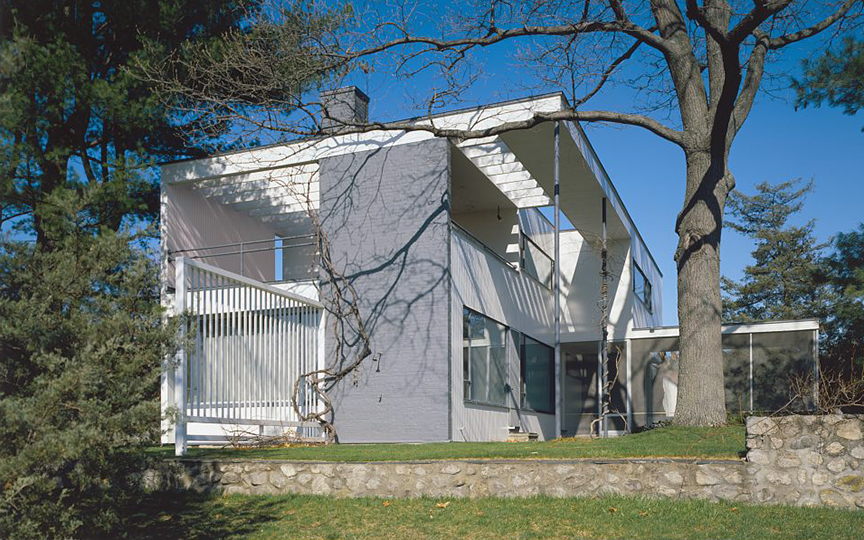 Photo: Gropius House, 68 Baker Bridge Road, Lincoln, Middlesex County, MA. Built in 1938, the Gropius House is important as an exemplary example of the International style and for its association with pioneering Modernist architect Walter Gropius, who designed it as his own residence. As the founder of the German Bauhaus and an early proponent of the International style, Walter Gropius is considered one of the founding fathers of the Modern architecture movement in America. Kack Boucher, photographer, undated, for HABS (Historic American Buildings Survey).

According to American House Styles: A Concise Guide, "the term International style was coined in 1932 when H. R. Hitchcock and Philip Johnson organized an exhibit of modern architecture at the Museum of Modern Art in New York." [1]

The International Style had its origins in Europe in the 1920s, when avant-garde architects attempting to rebuild after the devastation of World War I began to experiment with ways of applying new technological advances to building. They were influenced as well by artistic philosophies that favored abstraction and simplification. These architects promoted an architecture that used modern materials and techniques, that sought to ameliorate social conditions, and that eliminated ornament. Their stated aim was to break free from historic influences to create an entirely new architecture that would express and serve the radical changes occurring in 20th-century life and society.

This new architecture was reported on in American architectural publications, but it remained almost completely a European phenomenon until the early 1930s. The first widespread recognition of Modernism in the United States came in 1932, when the newly established Museum of Modern Art in New York City mounted an exhibition on the new architecture. An accompanying book was prepared by Philip Johnson and Henry-Russell Hitchcock, who coined the term "International Style" to describe the new movement's rejection of national traditions.

Adolf Hitler's rise to power in Germany gave an impetus to the spread of the International Style to the United States. Hitler thought of modern art and architecture as decadent and attempted to stamp them out, prompting three of the movement's leaders, Ludwig Mies van der Rohe, Walter Gropius and Marcel Breuer, to leave Germany for the United States. There they took posts at American schools of architecture, Mies at the Armour Technical Institute in Chicago, and Gropius and Breuer at Harvard.

During World War II, almost nothing was built in the United States that was not directly related to the war effort. Education continued, however, and the European refugees and their followers effected a drastic change in the shape of architectural education. In less than ten years, the nation's leading schools of architecture abandoned traditional curricula in favor of Modernism.

The major architectural periodicals continued publication through the war as well, and they document the change in architectural culture that took place during those years of enforced idleness. One periodical, Progressive Architecture (which had changed its name from Pencil Points in 1943) , summarized the change in its January, 1946, issue with an article called "Pearl Harbor to Nagasaki: A Review of Architectural Progress During the War Years." The article points out that in 1940 the International Style had been presented as one option, along with traditional styles. By 1945, Modernism enjoyed a near-monopoly of the architectural press. As wartime restrictions lifted and materials became available, a vast building boom began, fueled by demand for housing and other building after nearly 20 years of Depression and war. There was a mood of progress, and plenty of work for young architects.

Postwar modernism looked different from the International Style of the early 1930s. Between the wars, European modernism focused on social goals (such as worker housing), and was characterized by a hard-edged, machine-made aesthetic utilizing smooth, precise materials, most characteristically stucco, metal, and glass. This began to change in the later 1930s, particularly in work of Breuer, Gropius, and the Finnish architect Alvar Aalto, who began experimenting with rough-cut stone and wooden siding. This trend continued and increased during the war and after. In the United States, where wood was often used for both framing and cladding, Modern wooden houses were compared in architectural literature to Colonial buildings, seen as straightforward and "honest." The types of buildings the Modernists erected in postwar America were different, too: instead of blocks of workers' housing, the most important commissions were for corporate offices and single-family houses. The American preference for suburban living, combined with VA benefits and planning policies that encouraged suburbanization, created a boom in residential construction. Though the vast majority of houses built were traditional in style, the situation offered significant opportunities to Modernist architects. In many cases, it was easier to build Modern houses than other types of buildings: the outlay was relatively modest and the architect only had to convince one family, rather than a corporate board, to experiment with an unfamiliar style. Building houses for themselves or relatives provided architects with an opportunity to gain experience and to create demonstration projects that they could use to sell potential clients on Modern architecture.

Some popular magazines promoted Modernism, too. In 1950, House Beautiful launched a series on what it called "The New American Style." The series was not solely Modern in its aesthetics, but it included several Modern houses and discussed even traditional-looking houses in terms of planning and functionality, terms that came from the Modern movement. According to House Beautiful, this new style was characterized by the following: