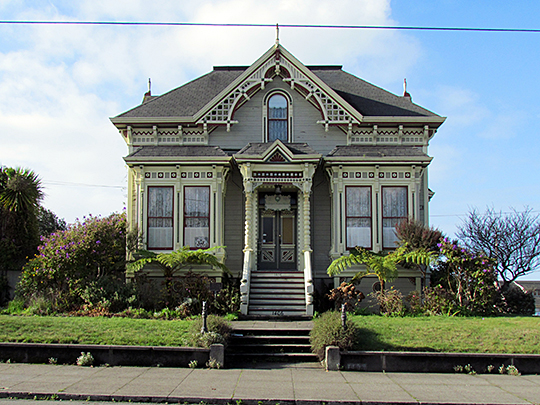 The Eastlake Style was simply a decorative style of ornamentation found on houses of various other Victorian styles, primarily the Queen Anne and Stick styles. It is named after Charles L. Eastlake, an English architect who wrote Hints on Household Taste, published in 1868. The book was reprinted in America in 1872 and became so popular that it required six editions within eleven years.

In his book, Eastlake promotes a peculiar kind of furniture and interior decoration that was angular, notched and carved, and deliberately opposed to the curved shapes of French Baroque Revival Styles such as the Second Empire. Traditionally, furniture makers imitated architectural forms, but Eastlake reversed this process. Eastlake houses had architectural ornamentation that had copied the furniture inside the house. American house builders found their own interpretations of the Eastlake Style, much to the displeasure of Eastlake himself.

Porch posts, railings, and balustrades were characterized by a massive, oversized, and robust Eastlake quality; but over the years they became more curvilinear, more Baroque in style. This was a result not only of the independent minds of American architects and builders, but also of the need to have these members machine made—turned on a mechanical lathe.

Builders and architects, influenced by the Queen Anne style put no limits on the arrangement of forms or the amount of ornamentation on the exterior of the Eastlake house. Many of the pieces of the house had to be ordered by catalog and assembled at the housebuilding site, like a large piece of furniture.