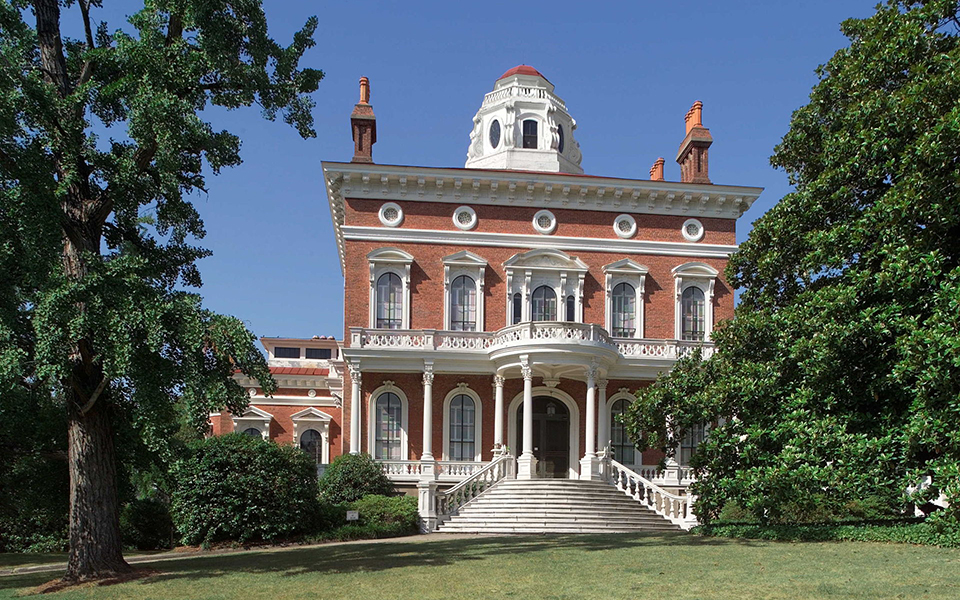 Photo: Johnston-Felton-Hay House (Hay House) ca. 1857, Georgia Avenue, Macon, GA. It was designated a National Historic Landmark in 1971 and listed on the National Register of Historic Places in 1973. Photograph courtesy of The Georgia Trust for Historic Preservation, 2009, [creativecommons.org/licenses/by-sa/3.0/deed.en] via Wikimedia Commons, accessed April, 2013.

The Italian Renaissance style, popular in the United States between 1890 and 1935, is based on authentic Italian models. Its predecessor, the Italianate style, persisted between 1840 and 1885, and was loosely based on early Italian designs. In the 1880s, the firm of McKim, Mead, and White gave impetus to the Italian Renaissance style with the Villard Houses[*] in New York. In the 1890s, fashionable architects employed the style, which provided contrast with Gothic-inspired Shingle and Queen Anne styles. After World War I, the perfection of simulated masonry exterior veneering fabrics made possible the accurate representations even in modest examples of the style. The style made significant advances nationally in residential architecture by 1910. Generally reserved for use on landmark residences in large cities, the style was eclipsed by the ubiquitous bungalow and revival designs from Colonial and Mediterranean traditions. After 1935, the Italian Renaissance style faded from fashion.

Identifying features of the style include low-pitched hip roofs, usually covered with ceramic tiles; wide boxed eaves that commonly contain large decorative brackets; symmetrical facade, although asymmetrical models with projecting wings and porte-cocheres are not uncommon; masonry construction with brick or stucco veneers; large brick chimneys; a variety of window treatments, with second story windows typically smaller and less elaborate than those located in the first story; and a recessed central entrance, usually with an arched opening accentuated by classical columns or pilasters.

* The Villard Houses are five separate (New York City) residences contained within a brownstone structure in the style of a Neo-Italian Renaissance palazzo with a U-shaped plan. The complex includes 451 Madison Avenue and its extension, 29 1/2 East 50th Street, which occupy the south wing of the palazzo on 50th Street; 453 and 455 Madison Avenue, which occupy the center wing; 457 Madison Avenue, which occupies two-thirds of the north wing along 51st Street; and 24-26 East 51st Street at the eastern end of the north wing. The three wings enclose an elegant courtyard entered through an arched wrought-iron gateway.

The detailing and proportions of the building were inspired by the Palazzo della Cancelleria in Rome. The brownstone facade is three stories with a high basement and attic. The hipped roof is covered with brown tile. A seven story tower rises unobtrusively from the final two bays of the southern wing, 451 Madison Avenue.

The Villard Houses are one of the earliest and most distinguished examples of the Neo-Italian Renaissance style in New York City, and their inhabitants were important figures in the history of American journalism and railroads. As a complex of brownstone residences, they represent one of the most sophisticated urban groupings of their time. The interiors of the Villard Houses contain some of the most beautiful rooms that remain from that era. The Villard Houses display a quality of workmanship no longer duplicable and contain works of several significant 19th century artists in America. They are incomparable and irreplaceable examples of design and craftsmanship.

Henry Villard was a journalist, railway promoter and financier. He owned the New York Post and was president of the Northern Pacific Railroad. Villard married Helen Frances Garrison, the only daughter of William Lloyd Garrison, the abolitionist. Their son, Oswald Garrison Villard, was the publisher and editor of The Nation magazine.

In 1882, Villard commissioned the firm of McKim, Mead & White to design a six-house complex. (Two houses in the north wing were combined in 1922 to make five, the present number.) The building was one of the firm's first designs in the Neo-Italian Renaissance style, a style which was later used in many of their most significant buildings, such as the Metropolitan Club (1892), the University Club (1899), 998 Fifth Avenue (1910) and the Racquet and Tennis Club (1918).