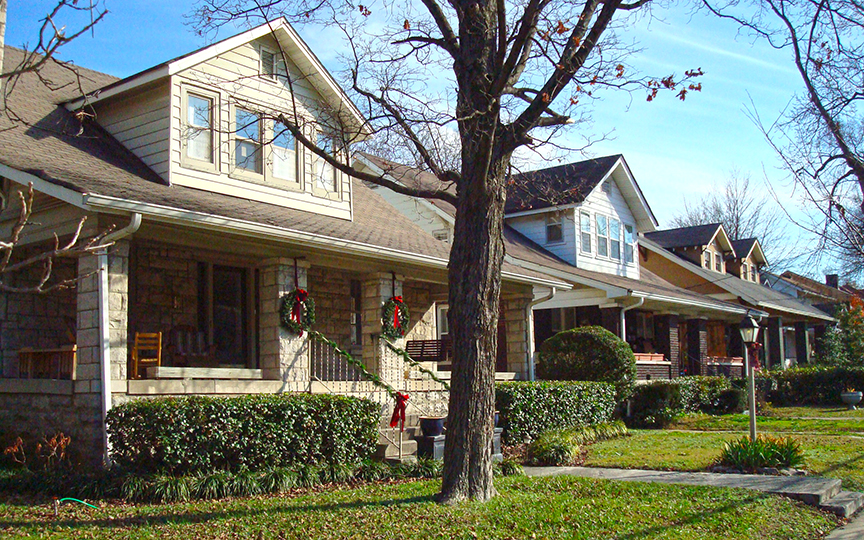 Photo: Bungalows in the Belmont-Hillsboro neighborhood, Nashville, TN. The district was listed on the National Register of Historic Places in 1980. Photographed by User:Nashvilleneighbor (own work), 2007, via Wikimedia Commons, accessed April, 2013.

The bungalow was adapted from the type of housing found in India. With low roof lines and verandahs, the main living room was centrally placed surrounded by secondary rooms and porches. The Craftsman bungalow offered a comfortable, practical design built with quality materials and a rustic, natural style, both inside and out. This bungalow style became popular throughout the United States, especially for the middle class.

The design of the bungalow was influenced by the Prairie School movement of the Midwest, the California Arts and Crafts movement, and a number of vernacular housing types. Part of the bungalow's appeal was its adaptation of these and other architectural influences in the form of a small comfortable house. The suburban bungalow – in styles ranging from English Cottage styles to the Mission Revival style of the Southwest – was popularized nationwide by periodicals such as Western Architect, Ladies' Home Journal, Craftsman, and Bungalow Magazine. Numerous catalogs and books appeared, many in multiple editions, including William A. Radford's Artistic Bungalows (1908), Henry L. Wilson's Bungalow Book (1910), Henry H. Saylor's Bungalow Book (1911), H. V. Von Holst's Modern American Homes (1913), Gustav Stickley's Craftsman Homes (1909) and More Craftsman Homes (1912), and Charles E. White's Bungalow Book (1923).