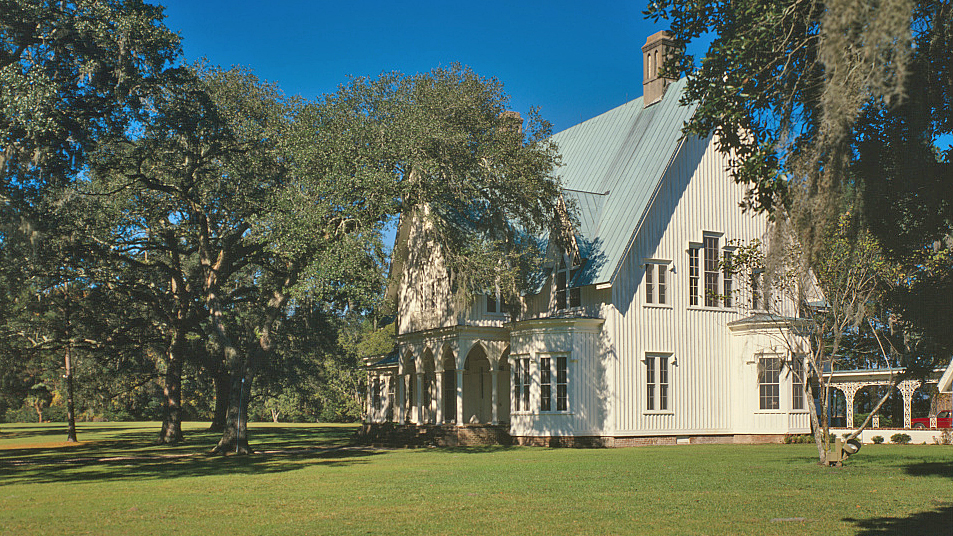 The Gothic Revival style was influenced from medieval Gothic architecture. Early in the period, Gothic Revival houses were constructed of stone and brick imitating the castles and magnificent cathedrals of Europe. With the desire for quick construction and the affordable availability of lumber in the United States, wooden cottages and villas in the Gothic Revival style became popular. Sometimes Gothic Revival Cottages are referred to as Carpenter Gothic. With the invention of steam-powered saw mills and new saws, Carpenter Gothic styles were heavily decorated with lacey "gingerbread" trim and scrolled ornaments.

Identifying features of Gothic Revival are steeply pitched roofs, usually with steep cross gables; intricately carved verge boards (barge boards) along the eaves and gable edges (beyond the mid-1860's, intricate vergeboards were replaced by decorative cross bracing at the uppermost point of the gable); vertical board-and-batten siding in gray and earthy tones; tall diamond-paned windows most often placed in gables, having pointed arches or two or three arches grouped together; arched or square hood moldings (drip-molding) over windows.

Most often there is a one-story porch which may be full-width or only situated at the entry. The porches are supported by flattened Gothic style arches. Balconies and verandas were enhanced with Gothic style brackets and railings.