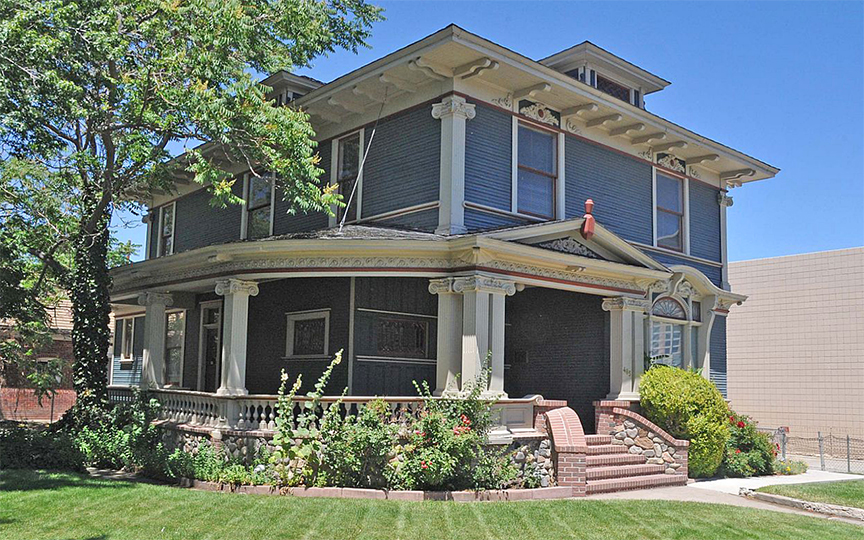 In 1863 the people of Nevada [†] Territory sent representatives to a Constitutional Convention at Carson City to make a frame of government for the proposed State of Nevada. The constitution there made was rejected by the people at the polls. But in February of 1864 Congress passed a new enabling Act which was signed by the President on March 21, 1864. On the Fourth of July a second Constitutional Convention was held at Carson City, and a second constitution was framed, which exempted the property in mines from taxation. The document was completed on the 27th day of July, 1864, and was adopted at the polls on September 7. On the 31st of October the President proclaimed Nevada a State of the Union.

In 1825 the first white man visited a portion of the country which is now known as Nevada, Jedediah S. Smith, a native of New York. Previous to this visit he had been in partnership with William H. Ashley, of St. Louis, who discovered the Great Salt Lake of Utah in the year prior, as well as the small lake near by which bears his name. Ashley, with his partner, Smith, built a fort at Ashley Lake and the mountaineers made it headquarters for some time, Smith until his trip to the now Nevada and Ashley for the entire time he followed trapping in the Rocky Mountain. Ashley was well known as a mountaineer and trapper when he set up his lares and penates at Ashley Lake, and his entire life was a series of adventures while pursuing his vocation. Smith passed through even more thrilling adventures in rapid succession, with hairbreadth escapes from wild animals and the still more to be dreaded Indians. He was murdered in 1831 by an Indian, who shot him down from ambush, the arrow killing him instantly.

† Wren, Thomas, editor-in-chief, A History of the State of Nevada, Its Resources and People, The Lewis Publishing Company, New York, 1904

The first settlers of Massachusetts were dissenters from the Church of England, whose greatest desire was to bring about a reform in church affairs so that the congregation should have more power in church government, and the minister should be more independent than formerly of the bishop. It was therefore natural that they should come in congregations, led or accompanied by their pastors, and that they should settle in a body. These church congregations obtained grants or patents, according to the second plan above mentioned, and set up a local government similar to that of the "tunscipe" of King Alfred's time, with the "town" and the "parish" practically the same. Says Forman: "Their town meetings were at first religious assemblages acting as pure democracies, except in Rhode Island, where the civil authority did not interfere in matters of conscience. The meetings in the colonies where the theocratic principle prevailed were usually held in a church, and all the male church members of the town who were of age could attend, take part in the discussions, and vote upon any question that might arise."

Thus the early settlers of New England came to live in compact communities, which later took the name of townships or towns. They were generally people of a high degree of intelligence, almost equal in social rank and worldly goods, hence they were democratic in their ideas of government and unanimous in the belief that "authority in spiritual and temporal matters should flow from the same source."

For some time after the first settlements were established town meetings were held frequently. The records show that the Town of Boston held ten town meetings in the year 1635. As the number of farms increased and the settlement spread over a wider territory, officers were elected to manage the town's business between meetings, until many of the townships came to hold meetings but once a year, unless some unexpected occasion arose which might require a special meeting. The principal officers are the board of selectmen, clerk, treasurer and board of assessors. In early days there was a tithing-man, a sort of "Sunday constable," whose business it was to see that everybody attended church, and to keep them awake during the services; a hog reeve, who was required to see that all hogs running at large had rings in their noses; a field driver, who impounded stray animals; and overseers of the poor. Some of these offices are still in existence, but the duties of their incumbents are not so arduous as in the old colonial days. The early town meeting overlooked nothing. It prescribed how the schoolmaster should use the rod upon unruly pupils, fixed the rate of taxation, designated the hours that men should labor, appropriated funds for schools and highways, etc. Most of this business is now transacted by the board of selectmen.

Beginning with the first settlements, the town system grew with New England and the town meeting soon became deeply rooted in the minds of the citizens. During the Revolution and the years immediately preceding it, the town meeting was the distinguishing feature of New England life. When the war began these little democratic communities proved to be the most powerful aids to the cause of liberty. In the town meeting it was easy to determine who was the patriot and who was the tory. Through their work military stores were provided, the celebrated "minute men" were organized, and the resolutions of many of the town meetings expressed in no uncertain language the sentiment of the people that afterward found utterance in the Declaration of Independence.

And their influence did not end with the Revolution. On December 22, 1807, Congress passed what was known as the "Embargo Act," to prohibit trade with England. Town meeting after town meeting in New England passed resolutions denouncing the act, which led President Jefferson to say afterward: "How powerfully did we feel the energy of this organization (the town) in the case of the Embargo. I felt the foundations of government shaken under my feet by the New England townships. There was not an individual in their states, whose body was not thrown with all its momentum into action, and although the whole of the other states was known to be in favor of the measure, yet the organization of this selfish community enabled it to overrule the Union."

While this may sound like a criticism of the town meeting and the manner in which New England defeated the purposes of the Embargo Act, it does not express Mr. Jefferson's real sentiments as to the value and importance of the New England form of government. When his own State of Virginia adopted the county as the chief political unit, Mr. Jefferson advocated the division of the counties into townships, and in referring to the New England system said: "Those wards, called townships in New England, are the vital principle of their governments and have proved themselves the wisest invention ever devised by the wit of man for the perfect exercise of self-government and for its preservation." Most of the southern states followed the example of Virginia and adopted the county system, with the result that in those states the civil township is little more than a name. In the West the two systems are combined. Michigan, Wisconsin and Minnesota, and those counties in Nebraska and Illinois that have adopted township organization, hold town meetings very similar to those of New England. In other states of the Middle West questions of incurring indebtedness for public improvements are submitted to the voters of the township at a general election instead of at a town meeting, though the principle is the same in general effect.

When the first grants were made to church congregations or companies of immigrants, the thickly settled portion of the grant was known as the "town" and the outlying, uninhabited portion as the "township." In time, as settlement was extended to these outlying lands, the last syllable was dropped and the name "town" was adopted for the entire district. The towns were incorporated by the colonial legislature, which was the only authority with power to create new towns, and this system has been in operation in Massachusetts for nearly three centuries. As a matter of experience, local government in New England has undergone some changes with the constantly changing conditions. Thickly settled parts of the towns in some of the New England states have in many cases been incorporated as villages or boroughs, the people surrendering a portion of the business to municipal authorities or agents, though in Massachusetts the town meeting" is still the chief source of power in the adjustment of local public affairs.

† Child, Hamilton, Gazetteer and Business Directory of Broome and Tioga Counties for 1872-3, The Journal Office, Syracuse, 1873