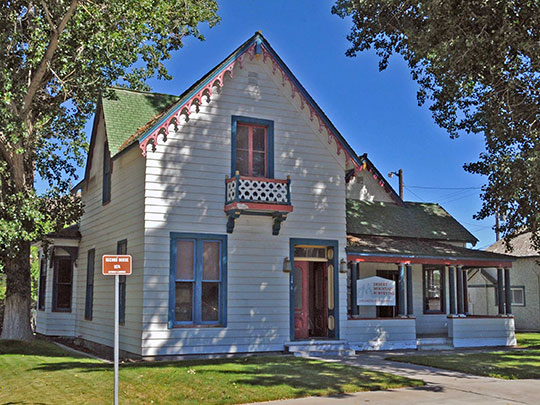 Winnemucca, Nevada is located in the Humboldt River valley. The Humboldt River, and its tributary, the Little Humboldt were important routes for trappers and explorers, crossing the Great Basin before the hordes of gold-seekers who rushed through the region on their way to California. Rather than beginning life as a mining town, as so many northern Nevada communities did, Winnemucca started in 1850 as French Ford, a ferry at the only dependable crossing on the entire 350-mile length of the Humboldt. It was known as French Ford after the Frenchmen who established it: the Lay brothers and their associate Frank Baud.

French Ford, around which cattle and sheep ranches developed, prospered as a teaming, shipping, and supply center serving a regular flow of Oregon and California bound emigrants, and after 1859 those headed to the Comstock, 180 miles to the southwest. By 1863, the Lay brothers had built a bridge down stream from the ferry crossing, where they established a saloon and hotel (an establishment that would become known as the Winnemucca Hotel). The spot became known as French Bridge. In the early 1860s, several mining districts were established in the vicinity, but it was the arrival of the Central Pacific Railroad in 1868 that guaranteed the permanence of the community at the big bend of the Humboldt River.

The railroad selected a route one mile above and parallel to the river, and away from the settlement at French Bridge. C.B.O. Bannon, a nephew of Abraham Lincoln's Secretary of the Interior, named the new townsite Winnemucca, in honor of the Paiute Indian chief of the same name. The two communities, which became known as Lowertown (on the river) and Uppertown (on the railroad), developed a rivalry. Uppertown, also known as Lanterntown because it was the first of the two towns to light its streets at night with oil lamps was modern and civilized compared to its neighbor a mile down hill. The first buildings in Uppertown were situated along the railroad tracks and consisted of a hotel and other commercial establishments.

By 1872, Winnemucca had wrested the seat of Humboldt County from Unionville, a mining town that was destined to become an out-of-the-way ghost town. Throughout the nineteenth century, Winnemucca was a transportation hub for travelers and goods on the transcontinental route, and as a result, the town thrived when others that relied on the boom-and-bust industries of agriculture and mining suffered and often died. For its central location, Winnemucca was also a thriving agricultural center, and according to author Robert Laxalt (1966), it served as a sheep and cattle capital for more than fifty years. Winnemucca was perfectly situated along the trapping and wagon trails, and when the Victory Highway came through the area in the early twentieth century it followed the historic routes. This provided additional economic security during the major downturns of the first half of that decade. With automobile and train travelers constantly passing through, Winnemucca's hotels and restaurants thrived.