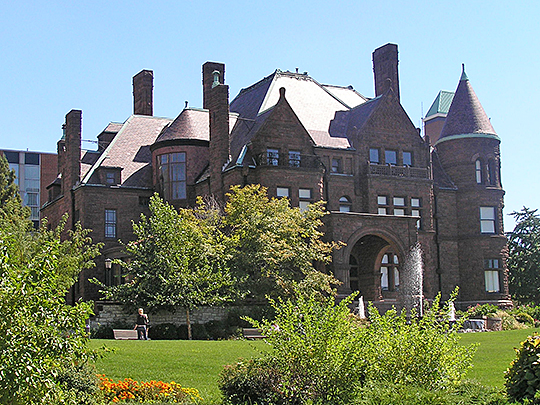 A village was founded here by Pierre Laclede Liguest in 1763 as a fur trading post. The combination of valley, bluffs, creek and river certainly inspired Liguest to predict with confidence that this place would become "one of the finest cities in America." The 18th century trading post had 3 primary streets running north-south with a number of narrow east-west streets intersecting. These avenues were given French names: La Grande Rue, Rue d'Eglise, Rue des Granges (the present First, Second and Third Streets).

Within the first 5 years of the 1800s St. Louis had grown to nearly 200 homes. The town was incorporated in 1809 at which time it was spread over seven and one-half acres. Settlements which grew up surrounding St. Louis (including Bremen, Florence, and Highland) were incorporated into the city in 1855, doubling its size (in area).

In 1876 the city was separated from the county and became the Independent City of Saint Louis.

One of St. Louis's greatest events was the 1904 World's Fair, also known as "The Louisiana Purchase Exposition." The fair itself spread over 1,200 acres, an area more than 80 times the size of the entire city just a century earlier. It is believed that overall the Fair had more than 20-million visitors. Worldwide awareness to the name St. Louis returned decades later, in 1927, after Charles A. Lindbergh's transatlantic flight in his "Spirit of St. Louis."