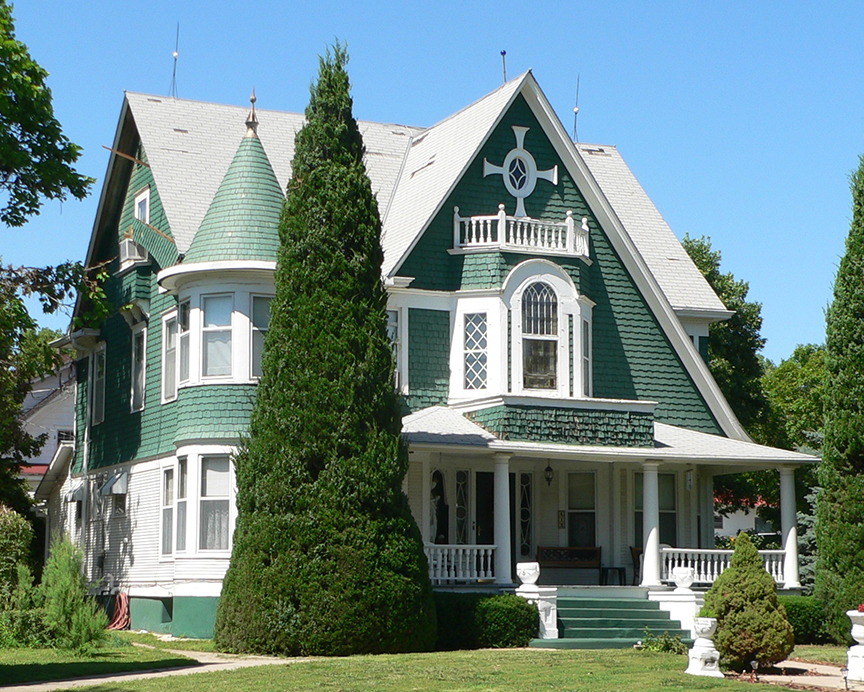 Portions of the text below were from the National Register of Historic Places Multiple Resource nomination "County Courthouses of Nebraska." [†]

Another river played a longer role as a key transportation conduit. It has been contended that "A major reason for the organization of the territory and the resultant replacement of the Indian society with that of the white men was that Nebraska was bisected by the Platte Valley, a natural highway to the West" [1] The Platte River valley has been termed "Nebraska's Nile," for it forms a distinct a fertile east-west highway through Nebraska, one that is still followed today. The Platte River valley figures highly in the state's development as an immigrant trail, the first transcontinental railroad route, the first paved highway route to cross America, and interstate highway route. At a time when most Nebraska settlement hugged the Missouri River, a tongue of settlement followed the Platte nearly to Kearney by 1870 and stretched to Ogallala ten years later, evidence of the transportation role of the Platte valley.

Climatic and topographic factors also affected Nebraska settlement patterns. In the eastern third of the state, farming practices, rainfall, soils, and topography are similar to neighboring Iowa. Southern Nebraska, especially the Republican River valley, also enjoys deep and rich soils. To the west conditions change considerably. Average annual rainfall drops dramatically, from 36 inches in the southeast part of the state to 15 inches in the northwest, and soils are substantially less rich than in eastern Nebraska counties. The Panhandle, the westward extreme of Nebraska, is lightly populated and has semi-arid conditions similar to adjacent Wyoming. The Panhandle and the west and north central parts of the state were settled later and more sparsely than the eastern third of the state, where two-thirds of the people live.

The aptly named Sand Hills, 20,000 square miles of rumpled undulations of short prairie grasses, are ideal for cattle raising. Early settlers were unaware of the Sand Hills advantages and shunned the area in the north central part of the state until the 1880s (although large scale ranching operations first used the area in the 1870s). A reflection of the dearth of settlement was the absence of counties in the Sand Hills and Panhandle regions in 1865 (with the exception of part of Holt County). Rail line construction stimulated settlement and county formation beginning in the 1880s. Passage of the Kinkaid Act that increased the size of legal homesteads further encouraged settlement in cattle country after 1904.

American-born settlers brought with them certain beliefs in American political institutions along with the spinning wheel, ax, and family Bible. County creation was among the first acts of pioneer arrivals. Creation of county government imparted an immediate legitimacy to an isolated settlement, evidence to themselves of plans to persist and thrive on the wild prairie plains. County creation also had practical applications. It set up the mechanism for orderly land transfer, helped maintain the peace, and stimulated further settlement and land sales.

Early settlement in Nebraska, as evidenced by county formation, began with riverside settlement. The 41 counties established by 1865 [2] (two years before statehood) emanated from the Missouri River as well as south of and along the Platte, and along the fertile valleys of the Loup River in north central Nebraska and the Republican River at the Kansas border. The Platte even served as the boundary for 14 of the counties in 1865.

The procedure for establishing a county was simple. A majority of residents in the area signed a petition and presented it to the governor. The governor proclaimed the county organized, named it, and appointed three temporary county commissioners from among the residents to oversee the first election in the new county. County residents then voted to selected permanent commissioners and a county seat. A county must have an area of at least 400 square miles, although the standard size is 576 square miles. (The largest county is Cherry with 5,979 square miles.)

For counties established during the early settlement period, the county seat was typically located where the most settlers were in the county. Later, arrivals were situated throughout the county and often called for a centrally located county seat, one that would be equally accessible to all county residents. Farmers wanted a county seat that was a convenient day's drive from home. In Cass County, the 1854 river town of Plattsmouth successfully fended off attempts to move the county seat inland in the 1880s. Lowell, county seat of Kearney County beginning in 1872, was not as fortunate. Despite having rail service and a brick courthouse, it lost out in 1876 in the county seat competition to centrally located Minden. Settlers in the south part of the county were behind the change. Other factors, especially railroad lines and rapid county-wide settlement, also affected county seat location in areas of later settlement.

County officials were charged with providing suitable space for county records in the newly created counties. In many cases, they took advantage of an existing building or built an extremely modest building and proclaimed it the courthouse. As Goeldner noted in his dissertation on courthouses, these early courthouses were perceived to be temporary measures which would be replaced when circumstances allowed. In Custer County, a log cabin on the Young ranch served as the first courthouse, between 1877 and 1882. Beginning in 1890, the first McPherson County courthouse was a sod building (not extant). In Thurston County a modest commercial storefront served as the first courthouse, beginning around 1889. County use then expanded to the adjacent hotel, and the "courthouse" existed in this cobbled fashion until 1927, a record for "temporary" use in the state. The next step in the evolution of courthouses was a building with permanent fireproof storage that was intended to convey its status as a government building.

Nebraska attained statehood in 1867, and the years following the Civil War saw dramatic population increases that did not peak until the 1890s. Several factors contributed to the late nineteenth century settlement of Nebraska: railroad construction, federal land policies, and advertising and other promotional work by the railroads.

Completion of the Union Pacific rail line across the state in 1868 heralded the railroad era in Nebraska. Rail lines, especially the Union Pacific and the Burlington lines, fostered westward settlement along their routes. Routes were built up from Kansas and over from Iowa; most extended from Nebraska's developing railroad center, Omaha. Lincoln, the new town created in 1867 to be state capital, was an obvious railroad destination, and two lines soon provided service. River valleys provided natural routes for additional construction. Not only were they good fertile places to farm but their relatively flat terrain facilitated rail construction. Railroads were planned beginning in the 1870s for the Platte, Republican, Elkhorn, and Loup River valleys.

Passage of the Homestead Act in 1862 also contributed to the settlement of Nebraska. The legislation was designed to encourage rural settlement by offering a quarter section of land (160 acres) to anyone who was head of a family, 21 years old, or an American citizen or had declared the intention to become one. To receive final patent or title to the land, the homesteader had to live on or improve the land for five years. Over half (68,862) the homesteads initially claimed between 1863 and 1895 in Nebraska were carried through to the final patent. While many of the original homesteaders did not remain, the Homestead Act and other factors did foster considerable settlement activity in the Nebraska countryside.

New counties proliferated during this period, a reflection of population growth and westward settlement activities. Of the 37 new counties created in the decade between 1870 and 1880, 31 dated from 1870-73. By 1875 the entire region south of the Platte was organized into counties, and substantial county development had likewise occurred north of the Platte, extending to the eastern edge of the Sand Hills. The Panhandle had been organized as immense Cheyenne County, later divided into seven smaller counties. Only the Sand Hills and the northwest corner of the state had no county government by 1875.

New towns also were born with railroad construction. Indeed, as part of their promotional activities to stimulate settlement along their lines, the railroads (or their related land companies) platted rail stops, offered inducements to existing settlements to move to the rail towns, and donated property for public use. Recognizing the importance of the county seat designation to continued town growth and prosperity, the railroads offered inducements to ensure that their rail town was also the county seat.

In Chase County the Lincoln Land Company, the real estate arm of the Burlington Railroad, provided the first courthouse (not extant) for its rail town of Imperial. The railroad donated the courthouse block for the county seats of Dawson, Dundy, Greeley, and Phelps Counties. Not content with just offering a courthouse site in Phelps County, the railroad also gave free lots to those who would move from the then county seat of Phelps Center to the railroad town (and eventual county seat) of Holdrege. And in Morrill County the Lincoln Land Company gave $10,000 toward construction of the present brick courthouse.

The arrival or presence of railroad connections on occasion vaulted a rail stop to county seat status. Such was the case in Box Butte, Greeley, Nemaha, and Washington Counties. In Nemaha County the citizens of the neighboring rail stops of Calvert and Sheridan so wanted the county seat that they put aside rivalries and merged to form the new town of Auburn, wresting the county seat from Brownville on the Missouri River in the process.

Economic and agricultural problems slowed development during some years of the 1870s but did little to dampen interest in the interior of Nebraska. Even the 1873 nationwide financial panic and grasshopper invasions followed by drought only served to slow development, not end it. Those settlers who survived the hard times of the 1870s enjoyed a time of relative prosperity in the mid-1880s. All the important variables fell into place-adequate rainfall, a strong agricultural economy, and a ready supply of optimistic settlers. Railroad construction continued apace, reaching 1,868.40 miles of track in 1880 and 5,144.48 the next decade.

[1] Danker, "The Influence of Transportation upon Nebraska Territory," p. 187.

[2] A number of them were later divided to form two or three counties as settlement increased.