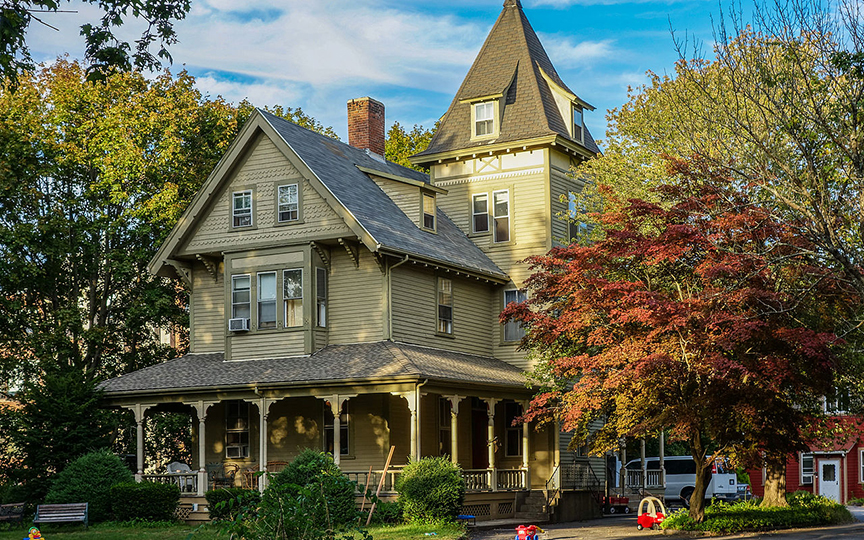 Giovanni Verrazzano is considered to be the man who “discovered” Rhode Island in 1524. Norsemen or Vikings may have been there before then, but there is no evidence of them remaining. There were also several Indian tribes living in Rhode Island when Verrazzano first set foot on it. He named the land after the Greek island of Rhodes.

Roger Williams founded Rhode Island in 1636. He originally lived in the Massachusetts Bay Colony, but felt the Puritans there were too strict. He set out to create a place where people were free to believe and practice their chosen religions. Williams became friends with the Narragansett Indians, from whom he bought land to set up a colony for other religious outcasts. Part of Williams’ original settlement included the city of Providence, which is now the state’s capital and largest city.

The origin of the name Rhode Island is uncertain. It is generally agreed that the name was first given to Aquidneck Island which lies in the Naragansett Bay. (Aquidneck, the name used locally, is labeled "Rhode" or "Rhodes" Island on most maps.) It may have been named for its shape approximating that of the Isle of Rhodes in the Aegean Sea; a second version credits the 1614 visit of Dutch navigator Adriaen Block with the Dutch word Roode which means "red."

The following text was selected and transcribed from the Introduction to a 1902 book on the history of Rhode Island; see [†], below.

Rhode Island ... has had a singularly interesting and eventful history, all the more interesting because in a tiny community the play of personal forces is best seen and the characters of individual men give color to the strife of principles and parties. Thus some touch of that dramatic quality which belongs to the cities of Greece and Italy recurs in this little republic on Narragansett Bay. Unlike in many ways as were the settlers who went forth from England under the Stuarts to the Greeks of two thousand years earlier, some of the questions which troubled both were the same, and bore fruits not wholly dissimilar. Nor are points of likeness wanting to the history of some of the older cantons of Switzerland.

Mr. Richman, who is favorably known to students of history by his book on Appenzell, has essayed in the present volumes to chronicle the fortunes of Rhode Island in its earlier days. The peculiar interest of those days lies in the fact that this colony was in a special sense the offspring and the embodiment of certain distinctive and novel ideas in the sphere of religion and politics. This character it owes to one man. Roger Williams, born just three centuries ago [ed. now, of course, more than four centuries ago as this was written ca. 1903] (probably in A.D. 1603), was the founder of Rhode Island in a clearer and ampler sense than any other single man — scarcely excepting William Penn — was the founder of any other American colony; for he gave it a set of principles which, so far as the New World was concerned, were peculiarly his own, and these principles long continued to affect its collective life. The men of Virginia were ordinary Englishmen of the class then dominant in England. The men of Massachusetts and Connecticut were Puritans of the normal seventeenth-century type, earnest and God-fearing, but almost as ready to persecute heretical opinions as they had found the church of Archbishop Laud ready to persecute them. Roger Williams had a new doctrine. In point of doctrine he seems to have been an orthodox Puritan, gifted with a double portion of the dissidence of dissent, although so "lovely in his carriage" that the hostility he roused did not take the form of hatred to himself personally. But he was the first apostle in New England of the theory of absolute freedom for the individual in matters of religion, with the consequent denial of the right of the civil magistrate to intermeddle in any wise with such matters. He was not the first discoverer of this great and wholesome principle, for isolated voices had for a century before his time uttered it in more or less explicit terms. But he was so much the most zealous and active exponent of it in America, and Rhode Island was so conspicuously the first colony to apply it in practice, that he and his community deserve to be honored by those who hold that one of the chief services which the United States has rendered to the world consists in the example set there of a complete disjunction of religious worship and belief from the machinery of civil government.

Upon this foundation, and upon the cognate principle of the fullest recognition of the rights of the individual in the civil sphere also, the commonwealth of Rhode Island was built, and thus it became the refuge of those who sought to escape from the grim stringency of the Massachusetts Theocracy. Roger Williams was in a sense before his time; and he may not in some respects have fully appreciated the results of his own principles. But the principles spread and the work told, though in Europe, with its solid mass of institutions inherited from the middle ages, no great progress was made till the spirit of political revolt and the spirit of critical inquiry came in to quicken the march of ideas.

A no less honorable and scarcely less important part of Williams's doctrines was his recognition of the right of the native Indians to their lands. His respect for their rights, his wish to deal fairly and live peaceably with the aborigines are among the most attractive features of his character and entitle him to be numbered in the noble band to which Las Casas and Penn and Wilberforce belong.

The story of the beginnings of Rhode Island is full of varied interest and Mr. Richman tells it well. He delineates Roger Williams with insight and with sympathy. He sets clearly before us the conditions under which the little community started on its long and chequered course. The enormous changes which have passed in America during the last sixty years do not diminish—indeed, they rather increase—the value of a study of the days wherein the foundations of this mighty edifice were raised.