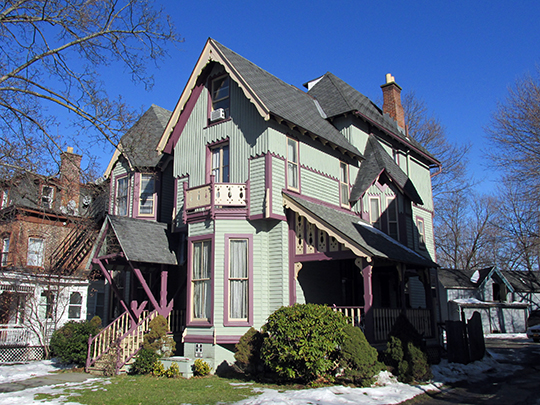 The historic resources of the city of Poughkeepsie, dating from about 1725 to 1940, represent a variety of architectural styles, types, and building practices typical of the mid-Hudson Valley. Included are some of the most distinctive examples in the region. Rare styles such as the Swiss and Art Deco modes are also found in Poughkeepsie. Associations with historically important people or events amplify the significance of many of the resources. Furthermore, the age, location, and character of the city's resources chronicle its growth and indicate its population's cultural preferences for residential, commercial, industrial, ecclesiastical, civic, and other institutional structures.

Founded in 1683, Poughkeepsie was one of the earliest non-native American settlements on the Hudson River. Settlers were lured by the immediate availability of land through the Hermanse and Saunders Patent and by the attractive physical features. The area within today's city boundaries offered natural harbors at the river's edge, the protective river bluff, the water power of the Fallkill Creek, rich woodlands, and arable land. Poughkeepsie's importance in the history of the Hudson Valley during the late-eighteenth and nineteenth centuries derived from its position at the juncture of a complex of transportation routes. Its proximity to the Hudson River and the intersections of the Albany Post Road (now Market Street and Washington Avenue) with Main Street and with New Hackensack Road (now Montgomery Street and Hooker Avenue) yielded Poughkeepsie the titles of market center, county seat, and even state capital for two years after the Revolutionary War. Developed first as a lumber and grain milling center and later as a commercial and industrial entrepot, Poughkeepsie emerged as the mid-Hudson Valley's largest and most influential city on the east bank Whaling corporations, a glass factory, a dye woods operation, breweries, potteries, chair manufactories, brick yards, carpet mills, a reaper works, and later, an elevator company and a separator plant boosted Poughkeepsie to national and international renown. By the close of the twentieth century's third decade when Poughkeepsie's economic heyday was ending, most of these industries had failed or moved from the city. The local economy was forced to rely on modest commercial enterprises and Poughkeepsie's status as county seat. Since then, the city's economy has been bolstered by its designation as Franklin D. Roosevelt's campaign headquarters and by the location of a major IBM plant on its southern perimeter. The buildings in Poughkeepsie's National Register Multiple Resource Area illustrate its history from its agrarian and milling beginnings to its rise to economic success in the commercial and industrial world of the nineteenth and early twentieth centuries.

The two hundred and one buildings included in the historic districts, rows of buildings, and individual properties on the National Register are the most distinctive and/or representative structures or neighborhoods in the city of Poughkeepsie. They also illustrate the best examples of historical and architectural indexes of mid-Hudson Valley culture. The significance of the districts and rows is mainly based on their architectural merits, including the siting of buildings, their intact nature, distinctive characteristics, and the changing preferences for certain styles within finite areas. Since the individual properties must stand on their own individual merits, their significance is usually based on a more complex combination of architectural and/or historical attributes. Most of these fall into more than one of the following categories: dated/architect-designed; promotor/philanthropist-associated; distinctive method of construction; rare style; best example of an architectural mode; historical associations with important personages, events, institutions, or sociological patterns.

The category of dated buildings which establishes the presence of a certain style or method of construction in an area, often overlaps with architect-designed or promotor/philanthropist-associated buildings, because their "engineers" were usually at the forefront of the style or method's era and were inclined to document their buildings. Poughkeepsie's residential landmarks included in this category are the Eastman Row, promoted by Poughkeepsie Mayor Harvey G. Eastman as the city's first modern townhouses in 1872; the 1885 Richardsonian Romanesque residence designed for judge/historian Frank Hasbrouck by Frederick Withers; the Shingle style dwelling planned in 1895 by local architect DuBois Carpenter; and five classic examples of early twentieth century Bungalows; the Stickley House, adopted from Craftsman plans for businessman Samuel J. Moore by DuBois Carpenter; the mannerist, stucco Bungalow on Corlies Avenue possibly designed by Percival M. Lloyd; the pair of Shingle and cobblestone houses on Hooker Avenue built by Andre Reid in 1910; and the first concrete-block house in Poughkeepsie, constructed by Raymond H. Bushnell in 1911.

Buildings associated with public use or visibility are more frequently dated or associated with architects than residential ones. The functional, bracketed style Innis Dye Works building proudly displays 1880 in its cornice, while Percival Lloyd's Richardsonian Romanesque First Presbyterian Church shows 1905 on its cornerstone. Two other churches, the 1873 St. Paul's Episcopal by Emlen T. Littel/Richard M. Upjohn/Tiffany Studios and the 1892 Trinity Methodist by Corydon Wheeler, are of great significance, as is the Vassar supported 1877 First Baptist Church. Almost all the single commercial buildings are well documented. Percival Lloyd's 1906 Beaux-Arts "Old Poughkeepsie Trust" building and his 1910 Classical Revival annex to Luckey's department store establish him as one of the city's finest turn-of-the-century architects. In addition, Luckey's 1923 main building is identified with Edward C. Smith, a less well-known Poughkeepsie architect. Two city firehouses were designed by Percival Lloyd, the eclectic Lady Washington in 1908 and the Late Gothic Revival Niagara in 1909. A third, the 1908 O. H. Booth Hose Company, was planned by local architect William J. Beardsley, who also obtained the prestigious contract for the 1903 Dutchess County Court House. The massive brick armory built by the state architect, Isaac G. Perry, in 1891, as well as the Roosevelt-influenced, Colonial Revival 1938 Post Office and 1941 Journal Building, illustrate government involvement in local civic structures. Poughkeepsie's most significant buildings that were devoted to leisure-time activities are well documented too. The Adriance family hired Charles F. Rose to design the 1898 city library in the Beaux-Arts style, a mode also selected by Jackson and Rosencrans for the "Old YMCA" in 1908. The Colonial Revival Amrita Club, built in 1912 as a local businessman's club, and the Greek Revival Dudley Memorial, planned by William W. Smith and architect John P. Draney in 1936, followed their period's popular revival styles.

Also included are buildings which, in the City of Poughkeepsie, display rare styles. The earliest extant buildings are rare because a majority of their contemporary structures have been demolished. The eighteenth-century Dutch Colonial Freer House, Georgian Glebe House, and Federal style Hoffman and Clinton House[l] clearly exemplify this. The city's Greek Revival structures, including the residence at 66 Garden Street, the Hammond Securities building, Empire National Bank, Barrett House, and the Greek Revival/Classical Revival "Old St. Peter's Church" illustrate this to a lesser degree. Of the handful of Gothic cottages in the city, only 66 Ferris Lane, 49 North Clinton Street, and 64 Montgomery Street meet the criteria for National Register eligibility. In the Swiss style, Poughkeepsie can offer only one building, 30 Hooker Avenue, and in the Art Deco mode, the best example is the Church Building. The earliest buildings in this category may also display rare construction details, which further add to their significance. None of the later edifices has a distinct method of construction, but rather, they employ methods used for structures of other styles during their periods.

Although nineteenth-century factories were numerous in Poughkeepsie, they are now considered rare since only a handful exists in the city and a relatively small percentage survives the mid-Hudson Valley. The 1834-1854 Pelton Carpet Mills is the oldest extant industrial structure in the city and with the c. 1874 Poughkeepsie Leather Manufactory and the 1880 Innis Dye Works represent period industrial architecture and its construction. On the other hand, the three houses which gain significance from their distinctive methods of construction are not rare in type or style but simply are the notable examples of these methods. The bungalow at 5 Ferris Lane and the Tudor/Colonial Revival dwelling at 85 Cedar Avenue represent the earliest concrete-block houses, while the Stickley House is probably the first hollow-tile construction dwelling in Poughkeepsie.

The remaining few buildings are residences and are significant because they are among the most distinctive buildings of their styles in Poughkeepsie. This category is composed of the pristine, Second Empire house at 140 South Cherry Street; the imposing, Second Empire country residence at 100 South Randolph Avenue; the unusual double house in the Italianate style at 73-75 South Hamilton Street; the distinctive Bracketed style Rombout House on Vassar Farms; the elaborate Victorian residential dwelling at 44 South Clinton Street; the charming Second Empire/Queen Anne row at 100-106 Market Street; and the impressive Queen Anne residence at 18 Barclay Street.

Historical associations with important personages, events, institutions, or sociological patterns promote the significance of many Poughkeepsie buildings. The oldest house in Poughkeepsie, the 1725 Freer House, was built by the New Paltz Huguenot family, thus, the structure is tied to early settlement patterns in the Hudson Valley. George Clinton, the distinguished Revolutionary soldier and state governor, is said to have used the Clinton House as his war-time headquarters. In addition, the site of the present courthouse is associated with Clinton's famous debate versus Hamilton and Jay, in which he spoke against ratification of the United States Constitution. The Hoffman House was probably built by Robert R. Livingston of Clermont and therefore gains great significance through its connection with that famous statesman. The Vassar family promoted the construction of several of Poughkeepsie's most impressive buildings, including the High Victorian Gothic First Baptist Church. Also, Matthew Vassar was first president of the Farmers and Manufacturers Bank, forerunner of the Empire National Bank. Another energetic Poughkeepsian was Mayor Harvey G. Eastman, who backed the unheard-of scheme to build the 1872 Second Empire row known as Eastman Terrace. Frank Hasbrouck the judge/historian, was also a local legend and was intimately involved with Withers' plans for his new Richardsonian Romanesque house at 75 Market Street. When John Adriance, inventor of the famous reaper, died, his children sponsored the Adriance Memorial Library in his honor. Built by another capitalist, the Dudley Memorial was planned by William W. Smith, of Smith Brothers Cough Drop fame.

Historical associations with important institutions or sociological patterns are usually connected to non-residential buildings. Churches of a community are important institutions which exemplify, influence, or serve as the ideal of sociological patterns. Therefore, churches are deeply involved with a community's history and often sponsor the most impressive edifices. The 1767 Georgian Glebe House is recognized as one of the most fashionable residences of its day, while the Art Deco Church Building, erected by the Reformed Dutch Church in 1932, is one of the rarest of its period. The Luckey-Platt department store gains additional significance when viewed in the context of Hudson Valley commerce and merchandising. It was the largest and first "modern" department store in the region; people came from miles away to shop there. The three factories, representing small industrial concerns, fall into this category because they are vestiges of Poughkeepsie's nineteenth-century industrial past. The Pelton Factory should be noted individually as the location of Poughkeepsie's silk worm industry.

In addition, Poughkeepsie's zoning ordinance provides for a local Historic District and Landmarks Commission. This commission is authorized to propose Poughkeepsie districts and individual properties for local designation, to monitor exterior renovations in such districts, and to consult with city officials and the State Historic Preservation Officer regarding projects which affect National Register properties. Poughkeepsie's citizens and government will continue to strive for the preservation of the city's historic resources, thereby assisting in the preservation of some of the most significant historical and architectural landmarks in the mid-Hudson Valley.