Photo: Houses in the Academy Historic District, Poughkeepsie, NY. The Historic District was listed on the National Register of Historic Places in 1982. Photographed by User:Daniel Case (own work), 2007, [cc-by-3.0 (creativecommons.org/licenses/by/3.0)], via Wikimedia Commons, accessed January, 2014. 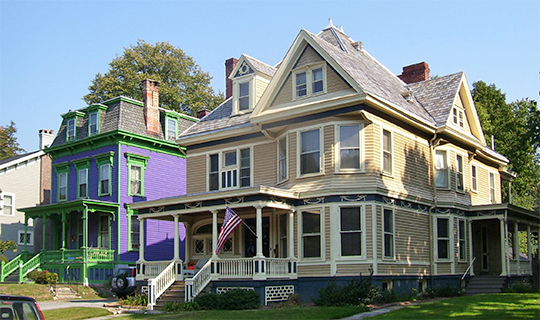 The Academy Street Historic District was listed on the National Register of Historic Places in 1982. Portions of the content on this web page were adapted from a copy of the original nomination document. [1]

Within four blocks of Poughkeepsie City's main commercial street, the Academy Street Historic District includes Greek Revival, Hudson River Bracketed, Second Empire, Victorian residential, Eastern Stick/Eastlake, Queen Anne, and Colonial Revival examples of residential architecture. The houses on the north end of the street (close to downtown) are generally smaller, earlier, and have less lawn space, while those in the middle of the Academy Street Historic District are larger, later (or incorporate later additions) and have bigger lots. Those on the south end of the Academy Street Historic District tend to be the largest, latest in period, and are situated on sizable properties. Two-and-a-half to three-and-a-half stories, the buildings are primarily of frame construction with a few brick dwellings and a sandstone English Country-style church. The houses are medium to large in size and are middle- to upper-class interpretations of taste in nineteenth-century Poughkeepsie architecture. Academy Street is a pleasant tree-lined one, with a large landscaped park around Christ Church at the north end and wooded lots at the south end.

Originally part of Lawrence Van Kleeck's "White House" farm and by 1805 of Bronson French's "French Place," the section of Academy Street incorporated in this Academy Street Historic District was laid out after French's 1836 sale to John Barnes, Richard Varick, George Corlies, and Caleb Barker. While the Panic of 1837 put a temporary halt on these speculators' plans, the third-quarter of the century witnessed the construction of about two dozen houses. The Academy Street area is significant as the earliest part of the first "planned" neighborhood in Poughkeepsie. It retains its mid- to late-nineteenth century atmosphere in its intact buildings with their distinctive characteristics, landscaping, and streetscape, and is one of the best nineteenth-century residential streets extant in the city. Among the architects who contributed buildings to the street are William J. Beardsley, Percival M. Lloyd, and William Appleton Potter.