Photo: Just outside the hamlet of Rhinecliff, Dutchess County. 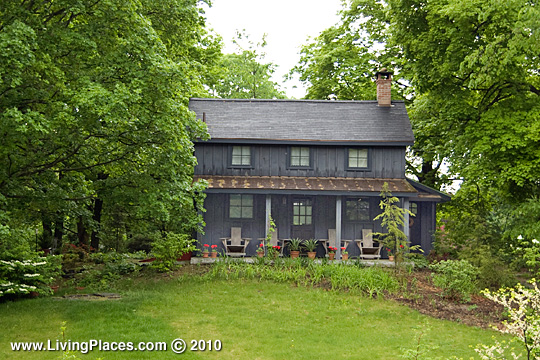 Dutchess County was one of the 12 original divisions of the Colony of New York, organized by the first Colonial Assembly on November 1, 1683. It was named in honor of the Dutchess of York, wife of the Duke, later King James II, to whom New York had been granted by King Charles II. Duchess in that day was spelled Dutchess, and this has continued as the official spelling of the county name to this day. The original boundaries were the Van Cortland property (the Westchester line) on the south, the Hudson River on the west, and Roeliff Jansen's Kill (the present Livingston's Creek in Columbia County) on the north. From the river the county was to extend 20 miles east into the woods. Of these boundaries only the river remains unchanged. In 1717 Livingston's Manor was taken from north Dutchess, and in 1812 Putman County was organized from south Dutchess.

The boundary line between New York and Connecticut had long been a subject of intercolonial dispute. The Connecticut Charter established the "South Sea" as a western boundary and the royal grant of 1664 to the Duke of York designated the Connecticut River as its eastern boundary. Crown commissioners sent to settle the conflict agreed upon a line north-northwest from a certain point on the Long Island Sound, supposing it would run parallel to, and 20 miles east of, the Hudson. Actually the line struck the river below West Point. As a result, Connecticut agreed in 1731 to cede to New York a territory equivalent in area to the 61,440 acres which comprise the present townships of Greenwich, Stamford, New Canaan, and Darien. The tract ceded by Connecticut to New York extended the whole length of Dutchess County along the Connecticut border and has been known since as "the Oblong." A slight ambiguity in the surveying remained undecided until 1879, when the present State line was finally established.

Before 1664 the Dutch had made three successful settlements in the Hudson Valley (New York, Albany, and Kingston), chiefly for the purpose of exploiting the fur trade, and had systematically attempted to colonize the remaining territory under the patroon system. The wilderness of Dutchess, however, had been left untouched. But it was the Dutch, 20 years after their country had surrendered to Britain the territory renamed New York, that finally formed the vanguard of Dutchess County settlers.

By the time the Rombout tract became the legal property of the patentees, settlement in Dutchess had already begun. A Nicholas Emigh was living at the mouth of Fishkill Creek, and a Peter Lasinck near the mouth of Wappinger Creek. Both family names, after many alterations in spelling, survive today. Almost simultaneously, settlements took place in Poughkeepsie and Rhinebeck. In 1687 Governor Dongan reported that none of these deserved the name of a village, but his notice of them at least indicates their existence. Although the soil of Dutchess was fertile and the river and streams abounded in fish, the conditions under which the first settlers lived were extremely primitive. The earliest habitations, of which there is little record, appear to have been caves dug into the sides of hills, lined with split logs, roofed with spars, and covered with layers of sods. Smoke from the cook fires found egress through a hole in the roof. Though small, these dugouts were doubtless warmer and snugger than the first crude cabins which succeeded them.

The trend of village settlement in the first quarter of the 18th century was back from the river, as is evidenced by the old village centers of Fishkill, Poughkeepsie, and Rhinebeck. The nature of the land, with its river bluffs and adjacent plateaus, was partly the cause, but the opening of the King's Highway from New York to Albany also exerted a marked influence. Authorized by the Colonial Assembly in 1703, this great artery was to extend from the northern end of King's Bridge, which spanned the Harlem (the first Manhattan bridge), to the "ferry at Crawlew over against the city of Albany." A special dispensation required sparsely settled Dutchess County to maintain only a path or highway wide enough for horse and man. But in 1713 this path was widened to conform to the rest of the highway. In 1728, three years before the New York-Connecticut boundary line adjustment, the first settlers had arrived in "the Oblong." These were Nathan Birdsall and Benjamin Ferris, Quakers from Connecticut, who settled on the long-famous Quaker Hill in the present town of Pawling. Later other settlers came from Westchester, Long Island, and Connecticut, and helped form the largest Quaker community in the county and was ready for the great influx of second, third, and even fourth generation pioneers from New England, inured to the climate and conditions of the New World and possessing the experience to establish themselves successfully. In the rapid growth of Dutchess during the mid-century, the abundant water power of the many streams, the fertile soil, and the extensive forests all played a part. Grist and sawmills were erected on many streams in the more thickly settled parts of the county; and as settlements reached farther inland, more mills were built until every hamlet with any potential power at all was self-sufficient in the essential staples of flour and lumber. County Government

Legislation for a system of county government was passed by the Colonial Assembly in 1691. This was the supervisor system, which, except for its temporary suspension in 1701-3, has continued in effect to the present without material modification. It is said to have been the model of the system now generally prevalent throughout the West.

In 1701 freeholders in Dutchess County were authorized to vote in Ulster County across the river as though residing there. Freeholders, or free property-owners, alone held the right of suffrage. In 1720 their number had risen to 148, but remained a small minority of the total population. The provisional attachment to Ulster County continued until 1713; then Dutchess, with a total of 445 souls, including 29 slaves, was allowed its representatives in the Colonial Assembly. The first county officials, elected in 1714, appear to have divided the county into three wards, the first civil divisions (followed later by precincts and towns), which were established in 1719 by the Assembly as the South (Westchester line to Wappinger Creek); Middle (thence north to Esopus Island off the center of Hyde Park); and North (remainder of the county, north to Roeliff Jansen's Kill).