Photo: Homes in the Balding Avenue Historic District, Poughkeepsie, NY. The Historic District was listed on the National Register of Historic Places in 1982. Photographed by User:Daniel Case (own work), 2008, [cc-by-3.0 (creativecommons.org/licenses/by/3.0)], via Wikimedia Commons, accessed May, 2017. 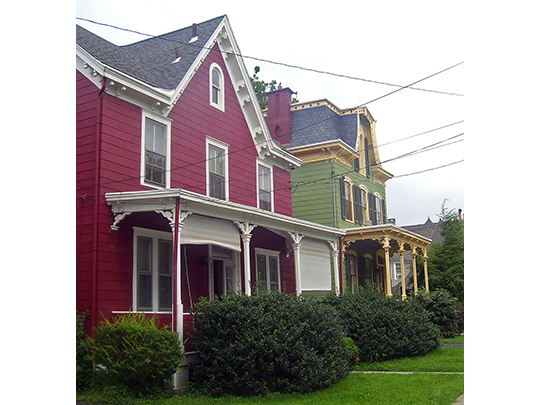 The Balding Avenue Historic District [‡] was listed on the National Register of Historic Places in 1982.

The Balding Avenue Historic District is a residential district primarily built after the middle of the nineteenth century and is comprised of middle-class houses of smaller size and simpler elements than the Academy Street area. The dwellings vary from two-and-a-half to three-and-a-half stories and all are clapboarded. The Balding Avenue Historic District includes a row of four simple Bracketed-style houses, and several Second Empire, Victorian residential, and Queen Anne houses. Details exhibited on the homes are simple, bracketed porches, slate mansard roofs, decorative paneling and shingles. These houses are contained in one tree-shaped block, just two-and-a-half blocks on the north side of Main Street.

Balding Avenue is one of the finest Poughkeepsie streets which illustrates a solidly middle-class neighborhood of the second half of the nineteenth century. In comparing its residences to those on Academy Street, one notes a modesty and simplicity in this district. Thus in the analysis of Poughkeepsie's taste for architecture from the scores of worker dwellings in the Mill and Union Street National Register Districts to the refined residences of Academy and Garfield Place, Balding Avenue has distinctive middle-class architecture, and often goes unnoticed. In addition, its intact, tree-lined streetscape augments the period of integrity, and at least one local architect, Percival M. Lloyd is known to have designed a structure for the street.