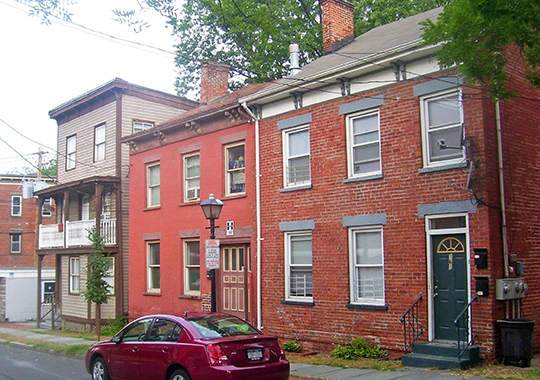 The Union Street Historic District [1] was listed on the National Register of Historic Places in 1971.

The Union Street Historic District comprises approximately eight blocks of downtown Poughkeepsie. The Union Street Historic District is bounded on the east by the crest of the Hudson River slope, which drops two hundred feet to the river; on the north by the rear property lines of the properties on the south side of Main Street; on the west by the North-South Arterial Highway, opened in 1965; and on the south by the boundaries of the East-West Arterial. This neighborhood has as its backbone Union Street, which runs diagonally down the slope from northeast to northwest, and intersects cross streets at angles of approximately 75 degrees and 105 degrees.

The Union Street Historic District stands like an oasis in the midst of land which has been cleared for arterials or housing projects: all sides have been razed. At least half of Union Street itself has been severed, wiped out for the North-South Arterial and the Riverview Urban Renewal project. The entire area is visible from the Mid-Hudson Bridge and the Hudson River itself and stands parallel to the arterial highway, but elevated well above it.

This section consists of approximately 173 historic structures, including several outbuildings either in a maintained or repairable condition. The great preponderance are of brick, two or three stories, with deep lots. The building units, their lots and scale are the smallest in any section of the city. The long narrow lots, with the use of rear rather than side yards, and the vertical character of all the structures enhance close relationships to give a strong community appearance. Some of the character of European street scenes exists here: a public use and presence contrasted with the private family life behind the house facade and out in the gardens and under the grape arbors.

The same basic house plan was used through successive stylistic periods from Federal through Victorian: a two and one-half story structure with a three-bay facade. This plan was developed in brick with stone trim, then in wood, and later in more elaborate brickwork, but always with freshness and appeal. The development from stoops to small porches and later to the larger verandas again shows variation in the urban character.

This house type forms the fabric for the entire Union Street Historic District, but it is accented by larger-sized residential structures, which are still harmonious. Some of these had local commercial activity on the ground floor, and most are located at the oblique street intersections.

The spatial quality of the diagonally aligned streets opens up the side streets and creates a visual, as well as an actual, neighborhood. This factor, combined with the steep grade of the hill, allows the buildings to breath and to catch their own views down or up the street, and so to participate in its activities, and thus to unify the streets into a coherent community.

The Union Street Historic District is the oldest remaining section of Poughkeepsie. Union Street was once a winding footpath to the Union Store on the Hudson River from the small settlement on the plateau. In 1767 Union Street became the first road to the river.