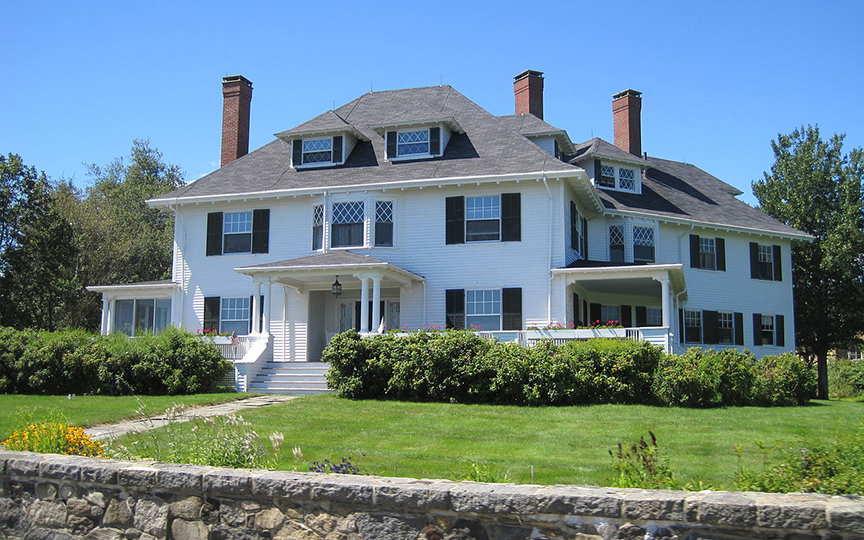 In 1623 Captain John Mason sent David Thomson, a Scotsman, and Edward and Thomas Hilton, fish-merchants of London, with a number of other people to establish a fishing colony in what is now New Hampshire, at the mouth of the Piscataqua River.

The settlement of New Hampshire [1] did not happen because those who came here were persecuted out of England. It was planned with much care and earnestness by the English crown and parliament. Here King James the first began a colonization project which not only provided ships and provisions, but free land bestowed with but one important condition, that it remain always subject to English sovereignty.

So it remained until the "War of the Revolution." Smith first named it "North Virginia" but King James later revised this into "New England." To the map was added the name Portsmouth, taken from the English town where Captain John Mason was commander of the fort, and the name New Hampshire is that of his own English county of Hampshire.

Captain Mason died in 1635, just before his proposed trip to the new country which he never saw. He had invested more than twenty-two thousand pounds in clearing the land, building houses, and preparing for its defense, - a considerable fortune for those days. By then Dover and Portsmouth had expanded into Hampton and Exeter, and its income from fishing was increased by that from trade in furs and timber.

Taking the idea from the English government, a community of "towns" was erected, and this became a "royal province" in 1679 with John Cutt as president, with a population intended to be as nearly like England as it could be. The "royal province" continued until 1698 when it came under the jurisdiction of Massachusetts with Joseph Dudley as Governor. Thus it continued until 1741.

Under King George II New Hampshire returned to its provincial status with a governor of its own, Benning Wentworth, who was its chief magistrate from 1741 to 1766.

Just as it was the first to declare its independence and adopt its own constitution, New Hampshire was the ninth and deciding state in accepting the National Constitution as that of a republic, never to be known under any other form of government. New Hampshire's John Langdon was the first acting vice-president of the United States, and was President of the Senate when Washington was elected first president.

New Hampshire is situated the most northern of the thirteen original states and lies between latitude 42-40 and 45-18 north and longitude 70-37 west. It is about 180 miles long and 50 miles wide, although the extreme width is 93 miles. It is bounded on the north by Quebec province in Canada, on the east by Maine and the Atlantic ocean, on the south by Massachusetts, and on the west by Vermont. The Connecticut River is the western boundary.

New Hampshire has 1300 lakes or ponds and 40,000 miles of rivers and streams which provide year round fishing and recreation in scenic surroundings, as well as power for the State's many industries.

Role of the Counties [2]

New Hampshire counties may not have as many governmental functions as counties in other states. Nevertheless, they play a significant role, particularly in the legal system. The state's primary courts are the county based Superior Courts, which handle most major criminal and civil cases, including all trials by jury. The more local District Courts can only adjudicate lesser offenses and disputes. Above the Superior Courts in the judicial hierarchy is found only the Supreme Court, the sole appellate court in the state's judicial system. So, the Superior Courts are the basic courts for all important cases in New Hampshire. The county attorneys and sheriffs, who serve the Superior Courts, therefore play important roles in the administration of justice. The county is the basis for the probate system, providing the registry of probate and the probate court. Counties also operate the jails, record all deeds, and provide important welfare services, such as county nursing homes. Many of these county functions are housed in the county courthouse and the county office building, which have often been the same building.