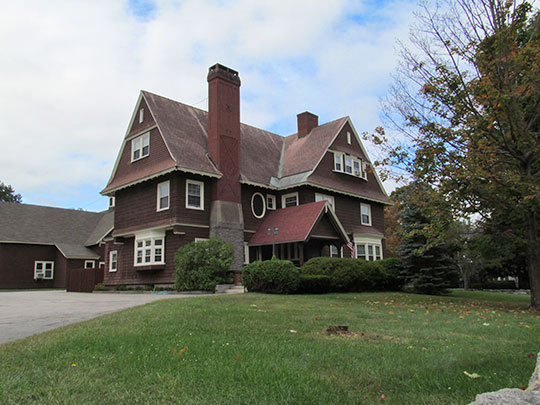 Incorporated in 1733 area's first settlement in 1659 was named Penacook, for the Indian name Pannukog, meaning crooked place or bend in the river. The first land grant was in 1725, and the town was incorporated as Rumford in 1733. The name was changed to Concord in 1765 upon resolution of a bitter boundary dispute between Rumford and Bow. Its central location was the logical choice for state capital, and Concord was so named in 1808. The State House, built in 1818 and first occupied in 1819, is the oldest in continuous use in the country. In 1853, the State granted Concord a city charter. It was in Concord that the Abbotts built the famous Concord Coach, modeled after the coronation coach for King George III. Granite quarrying has been another major industry, and Concord's quarries supplied granite for the US Library of Congress. Concord was home to Franklin Pierce, 14th President of the United States, following his presidency.

Located in the geographic center of New Hampshire, Concord is bounded on the north by Webster, Boscawen and Canterbury; on the east by Loudon and Chichester; on the south by Pembroke and Bow; and on the west by Hopkinton. The fertile floodplains along the Merrimack River provided the impetus for early settlement in this area.

The Concord area is part of the land occupied by the Western Abenaki peoples prior to European contact. Population estimates for this region, essentially all of what is now Vermont and New Hampshire range from 5,000 to 10,000 people at the beginning of the 17th century. People in this region tended to move from large towns to small camps at various times of the year. The area around Concord itself was the land of the Penacook, and evidence of 16th and 17th century European contact has been found along the Merrimack south of Concord and to the northeast around Ossipee Lake and Lake Winnipesauke. During the first decades of the 18th century, the general area was ravaged by warfare as a result of struggles between France and England and efforts at native extirpation by the New England colonists (New English).

Concord was founded by Europeans around 1720, when Captain Ebenezer Eastman arrived from Haverhill with a group of settlers. The initial plantation of "Pennycook" was formed by a grant in 1725. The plan of Concord was unusual in that it was laid out as a nuclear town (commonly used in Massachusetts) rather than as a range township (the plan most commonly used in early New Hampshire settlements). This meant that most of the lots and later homes were located in the central village, primarily along Main Street. In 1727, the area east of the river and in what is now West Concord was laid out and by late 1731 over 85 houses had been at least partially erected in the town. In 1733, the plantation was incorporated as the town of Rumford. In 1744, Rumford was fortified with ten blockhouses during the first French War (also known as King George's war, 1744-1748)

Following the Revolutionary War, Concord benefited from its position as the terminus of both the First and Fourth Turnpikes. Residential and mercantile activity remained clustered at the north end of Main Street although the villages of West and East Concord continued to evolve throughout this period.

Concord was designated as New Hampshire's state capital in 1808, dramatically impacting the city's commercial, professional and industrial development. The first State Prison was built in 1812, followed by the NH State House in 1819. In 1823, Concord became the county seat or shire town for Merrimack County. The business district, concentrated on the north end of Main Street, began to branch off into other areas. Many of the City's existing streets were in place by 1834, with the village core extending from Main Street on the east to Penacook on the north, Merrimack Street on the west and West, Water and Hall Streets on the south. Houses and businesses lined Main, State, South and Green Streets. Diverse manufacturing and extraction industries supplanted agriculture as the dominant economy of Concord during this period—granite quarrying, furniture making, musical instrument building, and the manufacture of freight vehicles by the Abbot-Downing Company (founded 1813) were the most prominent. The villages surrounding Concord's center continued to expand slowly, but residential growth remained concentrated in the Central Village. c. 1842-1914. The arrival of the railroad in 1842 had a profound impact on Concord and ushered in the City's period of greatest change. After the eventual consolidation of over 30 separate railroad lines, the Boston & Maine (B&M) Railroad emerged as the primary company in New Hampshire. The City's population doubled in the decade following the railroad's arrival, reaching approximately 9,000 in 1853. It was in that year that Concord became incorporated as a City. The granite industry expanded significantly in the post-Civil War period and Concord granite became highly sought-after throughout the country. The success of the Abbot-Downing coach works spawned numerous ancillary industries such as harness and axle makers. Printers, belt makers, iron foundries and silver makers all prospered and expanded during this time period, benefiting from a highly skilled workforce. At the close of this period the railroad was the City's largest employer.

The New Hampshire State Hospital opened in 1842 and a new prison facility was opened in 1880. A civic district emerged around the newly renovated State House during the 1880's that eventually included the Post Office, Courthouse, State Library and City Hall. The City initiated a period of major civic construction in the final quarter of the 19th century with the construction of police and fire stations and a library that was built by Daniel Chester French (the current library was erected in the 1930s). Sewerage and water works systems were built and numerous public schools were constructed.

Residential development exploded during this period and by the first decade of the twentieth century many of Concord's downtown neighborhoods were fully developed. Most of the homes were single-family, wood-frame houses, although a large number of duplexes including the distinctive "Concord Duplex" and a number of brick homes are found throughout the city. Starting in 1878, streetcar lines from South Main Street to Penacook brought residents to and from work and shops and allowed for even more substantial growth in the West End, West Concord and Penacook. During this era, the village of Penacook (initially called Fisherville) became known as a center of textile and furniture manufacturing, while East and West Concord continued to grow at a steadier pace with West Concord benefiting from country's reliance on Concord granite. A strong rural tradition of farming continued in the areas immediately surrounding the City's urban area.

In the years after World War I, following a pattern seen throughout New England, the influence of the railroad and industries of Concord began to wane. Electronics, printing and insurance replaced the railroad as the leading employers during this period. The rise of the automobile brought about changes in the character of the city as major arteries were widened and forced out the street car lines. Relatively little construction took place during this period. Residential growth continued at a slower pace and was concentrated in the South End and apart from the Concord Public Library and the State House Annex, few governmental structures were built during this time.

The use of passenger rail continued to decline after World War II and came to an end in the 1960s. The Concord rail station was replaced by a shopping center in 1960-1961, but Concord remained major transportation center with the construction of Interstate Highway System through Concord including first I-93, then I-89, and culminating with the construction of I-393. The railroad and textile industries, and most of the granite and printing concerns closed shop by the middle of the twentieth century. In 1954 the Concord Regional Development Corporation (CRDC) was formed to attract new industry in response to the decline of the long standing industrial concerns. CRDC was able to attract new industries and business to outlying industrial parks on the Heights near the Airport and in East Concord at I-93 Exit 16 and in Penacook at I-93 Exit 17. During this period Concord's largest employer became the State of New Hampshire, while Concord grew to be the second largest Health Care Center in NH, and a major retail, wholesale, finance and professional service center. Residential development continued after World War II with major subdivisions on the Heights, in the Fisherville Road corridor between West Concord and Penacook, in the South End, and in East Concord. Concord went through several major growth periods, including one in the early 1970's and another in the mid-1980's. Many new subdivisions and multi-family complexes constructed and available land has become more scarce within the last two decades.