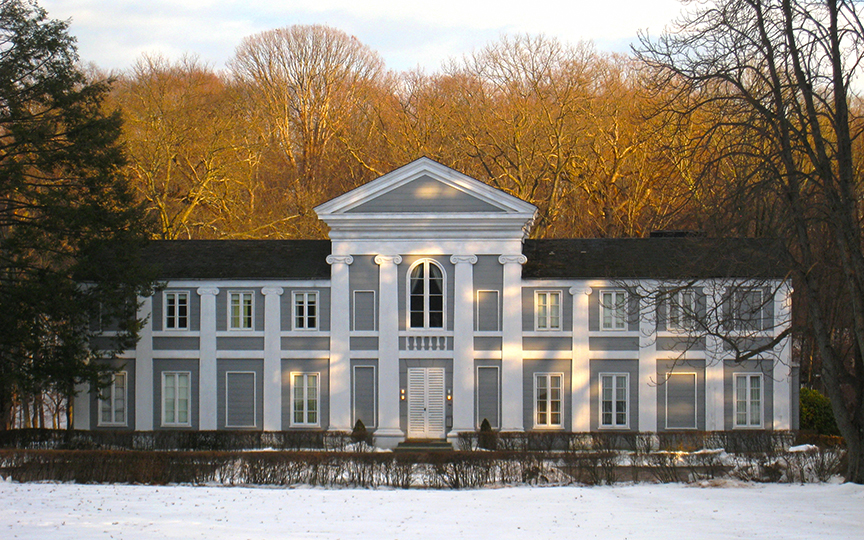 A New England State, much of Connecticut is considered suburban to New York City.

A Dutch navigator, Adriaen Block, was probably the first to observe the possibilities of the region, when he sailed along the coast and up the Connecticut River, which he discovered in the year 1614 and called the Varsche River. Nearly twenty years passed, however, before the Dutch established a trading post and fort near the future site of Hartford (June, 1633). By this time the Indians had reported the existence of a fertile country with valuable trading possibilities to the Plymouth colonists, and Edward Winslow made an exploratory visit to the Connecticut Valley in the summer of 1632. Next year a Plymouth expedition sailed up the Connecticut, past Dutch Point, to the mouth of the Farmington River. There, on September 26, 1633, they established a post at Mattaneaug (Windsor). In the same year, John Oldham of Watertown and three others explored the Connecticut Valley, and 'discovered many very desirable places upon the same river, fit to receive many hundred inhabitants.' This report accomplished what the persuasions of Winslow and Bradford had not effected, and stimulated the first permanent settlement from the Bay towns of Watertown, Dorchester, and New Town (Cambridge).

In 1634, a large party from Watertown, with Oldham among them, settled at Pyquag (Wethersfield). They claimed that they were the first settlers to plant a crop in the valley. In the summer of 1635, emigrants from Dorchester settled in Windsor, erected a building, and thereby gave present historians of Windsor an opportunity to argue that this town was the first. But the severity of the winter was such that most of the 'inhabitants' were driven down the Connecticut River to the new military post at Saybrook, where they took ship to their homes in Dorchester.

In October, 1635, the first general migration took place, when fifty persons from New Town (Cambridge) under the leadership of John Steel moved across Massachusetts with all their household goods and settled at Suckiaug (Hartford) close by the Dutch trading post. The Reverend Thomas Hooker and his congregation trekked westward in the following spring. The prime motive of these migrations was land hunger, as the constant arrival of newcomers from England taxed the resources of the early towns of Massachusetts Bay. To economic causes were added the rivalries of strong-willed men, such as Hooker and John Cotton, and a dislike of some of the autocratic and theocratic features of the government of Massachusetts. These colonists from Watertown, Dorchester, and Cambridge, who were settled in Wethersfield, Windsor, and Hartford, soon absorbed the small number of Plymouth people and kept the Dutch confined to their trading post, which was finally abandoned in 1654. In 1638, the Fundamental Orders, drafted under the inspiration of Hooker's sermon of May 31 and largely the work of Roger Ludlow, were drawn up, and in January, 1639, they were adopted by the three towns. Under this document, sometimes called the first practical constitution, the towns formed 'one publike State or Commonwealth.' Already (April 26, 1636) a general court had been held, in which Steel and Ludlow took part; and it now became the supreme authority, with deputies from the towns acting in concert. It is not without significance that Thomas Hooker was John Pym's brother-in-law. To Pym, Hampden, and other reformers in the mother country, the main organ of political power was the House of Commons. So here in Connecticut, the Governor was merely a presiding officer, and the courts were creations of the legislature by which their judgments could be set aside. Until the Constitution of 1818 replaced the Fundamental Orders and the Charter of 1662, the legislative body continued to dominate the executive and the judicial. It is worthy of note that the preamble presumed a close relation between Church and State, and that in 1659 the general court imposed a property qualification for suffrage. There was a distinct aristocratic element in this democracy.

In 1635, a second settlement, Saybrook, was established at the mouth of the Connecticut River by order of an English company of lords and gentlemen, among whom were Lord Say and Sele and Lord Brooke for whom the Colony was named. John Winthrop, Jr., son of the Governor of Massachusetts, was in charge of this enterprise, his chief aids being Colonel George Fenwick and Captain Lion Gardiner. The Saybrook group possessed a deed of conveyance from its patron, the Earl of Warwick, under date of March 19, 1632; but Warwick never received a patent to support the large claims later made by the Connecticut Colony to lands from Narragansett Bay westward to the Pacific Ocean. As the other Puritan lords and gentlemen became involved in the Cromwell Revolution, the settlement did not thrive at first and was important only as a fort and trading post. After several years of negotiation, Fenwick sold his rights to the Connecticut Colony in 1644. There is no evidence that he had any authorization from the company to convey the property, nor did Warwick's original deed carry jurisdictional rights. At any rate, the separate existence of Saybrook Colony came to an end in 1644, and Connecticut succeeded to a doubly doubtful title.

The third settlement was made in 1638 at Quinnipiac (New Haven) by colonists of the English merchant class, under the Reverend John Davenport and Theophilus Eaton. Land was acquired by purchase from Momauguin, chief of the local Indians, and the lack of a patent or charter vexed the Colony from its inception until its absorption by Connecticut in 1665. After living for a year under a plantation covenant, the colonists organized a civil government in June 1639. 'Seven pillars' were chosen, chief of whom was Theophilus Eaton, the elected magistrate. It was stipulated that all free burgesses should be church members, a restriction which proved increasingly irksome to the settlers. Internal dissatisfaction with the 'judicial laws of God as they were declared by Moses' became an acute problem. These 'Blue Laws,' as they were called by the Tory historian, Samuel Peters, in his General History of Connecticut (1781), were Mosaic only in capital cases, and in general closely resembled the Cotton Code of Massachusetts. They contrasted unfavorably, however, with the wider freedom of the Connecticut Colony, particularly in the matter of franchise.